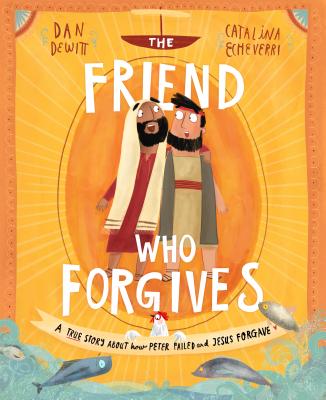 The Friend Who Forgives: A True Story about How Peter Failed and Jesus Forgave

The Friend Who Forgives Board Book: A True Story about How Peter Failed and Jesus Forgave

The Friend Who Forgives - Coloring and Activity Book: Packed with Puzzles and Activities

Sunny Side Up: The Breakfast Conversation That Could Change Your Life

The Bright Light and the Super Scary Darkness

It Will Be Okay: Trusting God Through Fear and Change

The One O'Clock Miracle: A True Story about Trusting the Words of Jesus

The Storm That Stopped: A True Story about Who Jesus Really Is

buy this for your kids

The story here centers around Peter and, particularly, his denial of knowing Jesus. The author, Dan DeWitt, pulls together some of the stories from Peter's life (such as him being a fisherman and Jesus calling him to be his disciple) to give some background to Peter's relationship with Jesus. Peter saw Jesus as a friend, but the more miracles he saw Jesus perform, the more he realized Jesus was something more. Jesus' death is mentioned, but nothing related to his death or crucifixion is shown. Peter is surrounded by the darkness of night (and the rooster who crowed), saddened by his faithlessness. Of course, Jesus rises again and offers Peter the chance to say that he loves Jesus three times.

Catalina Echeverri has superbly illustrated this book. When Peter is described as having always been someone who said the wrong thing, we are given three pictures of him comparing a pregnant woman to a whale (when he was a child), saying something messy to a friend (as a teen), and gloating over a major catch of fish to other fishing buddies (as an adult). The characters are not bland and flat. They show life, surprise, sadness, fear, and joy. And once Jesus tells Peter that a rooster will crow, that rooster appears in the following scenes of Peter's denial as a reminder to the kids that the rooster is right... around... the corner. Jesus' words will come true.

In this book, Jesus isn't white. He looks like a man from the Middle East, which is what he was.

The book ends with three paragraphs on Peter and Jesus's story, with Bible references included. Hopefully this will help you and your child to remember that "if you trust in Jesus, he will forgive you too-again, and again, and again."