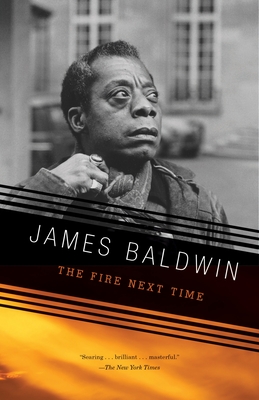 The Fire Next Time

'A seminal meditation on race by one of our greatest writers' Barack Obama 'We, the black and the white, deeply need each other here if we are really to become a nation' James Baldwin's impassioned plea to 'end the racial nightmare' in America was a bestseller when it appeared in 1963, galvanising a nation and giving voice to the emerging civil rights movement. Told in the form of two intensely personal 'letters', The Fire Next Time is at once a powerful evocation of Baldwin's early life in Harlem and an excoriating ... Read More

'A seminal meditation on race by one of our greatest writers' Barack Obama 'We, the black and the white, deeply need each other here if we are really to become a nation' James Baldwin's impassioned plea to 'end the racial nightmare' in America was a bestseller when it appeared in 1963, galvanising a nation and giving voice to the emerging civil rights movement. Told in the form of two intensely personal 'letters', The Fire Next Time is at once a powerful evocation of Baldwin's early life in Harlem and an excoriating condemnation of the terrible legacy of racial injustice. 'Sermon, ultimatum, confession, deposition, testament, and chronicle ... all presented in searing, brilliant prose' The New York Times Book Review 'Baldwin writes with great passion ... it reeks of truth, as the ghettoes of New York and London, Chicago and Manchester reek of our hypocrisy' Sunday Times 'The great poet-prophet of the civil rights movement ... his seminal work' Guardian Read Less

All Editions of The Fire Next Time

No Name in the Street

In this book revealed the second class citizendhip that America imposed upon the African American people they brought here against their will and when so called freedom arrived derived and passed laws with malicious acts of hate groups that ranged all the way to lynching with lawlessness running rampant. We see these acts pursued now and this is the 21st century. James Baldwin was extraordinary in his dialogue as he brought the issues to light.

James Baldwin's (1924 -- 1987) 1963 book "The Fire Next Time" consists of two highly personal and provocative essays arising from his life and experience. The essays are beautifully and passionately written. They involve the African American experience while expanding to consider sexuality, religion, the nature of America, and the meaning of life.

The first and shorter essay, "My Dungeon Shook" is a letter written to Baldwin's near-15 year old nephew and namesake on the centenary of the Emancipation Proclamation. The letter is eloquent in its intimacy and its breadth. Baldwin's root of his dispute with his country, he tells young James is that "you were born where you were born and faced the future that you faced because you were black and for no other reason." Baldwin urges his nephew to be strong, to stay within himself, and not try to meet the expectations of white people. He argues passionately that white society suffers and has had difficulties finding an identity due to its treatment of African Americans. Young James is to understand this situation and to respond with an understanding that the white society not less than the former slaves must come to understand the meaning of Emancipation and freedom.

The longer essay, "Down at the Cross" offers deep reflections on the author's life with a focus on religion and race. The essay is in three parts. In the first, Baldwin discusses his adolescence and how he came to be saved and to preach from ages 14-- 17. This part of the essay offers insight into Baldwin's wonderful semi-autobiographical 1952 novel "Go Tell it on the Mountain". Baldwin explains poignantly his early attraction to Christianity in face of the sexual and other temptations of the Harlem streets and the reasons for his abandonment of Christianity. Baldwin came to conclude that "whoever wishes to become a truly moral human being .... must first divorce himself from all the prohibitions, crimes, and hypocrises of the Christian church." The concept of God, if of any use at all, is to make people "larger, freer, and more loving", traits which Baldwin finds are to be developed outside organized religion.

The second part of the essay recounts Baldwin's meeting with Elijah Muhammad. This portion of the book expands the lessons Baldwin took from his youth and from his rejection of Christianity. Elijah Muhammad had invited Baldwin to dinner in an effort to convert him to the Black Muslim separatist movement. Baldwin offers a persuasive portrayal of Muhammad, his retinue, and of his belief in a black God who had made white people devils. There is a highly revealing conversation between Muhammad and Baldwin. Showing a great deal of understanding of Muhammad, Baldwin rejects him and his God and his separatist teachings.

The third part of this essay is involved and difficult. Baldwin develops his own understanding of race, of America, and of religion separate from the Christianity of his youth or the teachings of the Black Muslims. He finds that the appeal of the Black Muslims lies in the centuries of abuse and degradation African Americans have suffered in the United States. The error of Muhammad's teachings, for Baldwin, was its separatism. African Americans and white Americans need to come to understand the meaninglessness of distinctions based upon color. African Americans are part of the fabric of the United States and have been so from the beginning. This openness of the United States is part of its nature and its promise, unlike the cultures of Europe which Americans too often try to imitate. More fundamentally, the African American-white relationship requires, for Baldwin, a redirection of meaning and of what is spiritually important in life. While rejecting religion, Baldwin is a spiritual thinker. "Perhaps the whole root of all our trouble", he writes, "is that we will sacrifice all the beauty of our lives, will imprison ourselves in totems, taboos, crosses, blood sacrifices, steeples, mosques, races, armies, flags, nations, in order to deny the fact of death, which is the only fact we have." America offers the unique, difficult opportunity to overcome race hatred and to move forward with meaningful lives of love, comradeship, and appreciation of sexuality. "If we", Baldwin concludes, "and now I mean the relatively conscious whites and the relatively conscious blacks, who must, like lovers, insist on, or create the consciousness of the others -- do not falter in our duty now, we may be able, handful that we are, to end the racial nightmare, and achieve our country, and change the history of the world."

I found "The Fire Next Time" beautifully written and provocative. It is a short difficult book which will bear repeated readings. The work is available separately and in a collection of Baldwin's Collected Essays published by the Library of America.