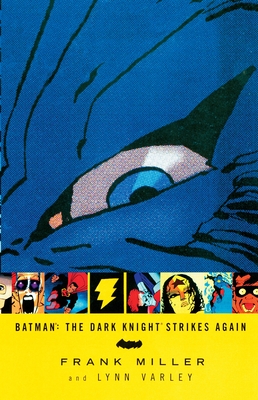 Written as a sequel to the groundbreaking "Batman: The Dark Knight Returns," this masterly hardcover takes place three years after Batman's defeat of Superman. Read More

Written as a sequel to the groundbreaking "Batman: The Dark Knight Returns," this masterly hardcover takes place three years after Batman's defeat of Superman. Read Less

Taking place three years after The Dark Knight Returns, Batman and his soldiers, created in The Dark Knight Returns, wage a war to free the people from an oppressive government while solving the mystery of a seemingly returned from the dead joker, who has been killing superheroes. Superman is ordered by the government to stop superman, and is eventually defeated by batman and his allies. Brainiac comes to destroy Gotham, only to kill Mr Marvel, bringing out Superman to defend the city. Superman is convinced that he must die to save the bottle city of Kandor that Brainiac and Luthor are holding hostage. Superman resigns himself to death as his previously hidden daughter comes to the rescue, helping Superman realize once again that Batman was right. Batman continues on to eventually solve the mystery of the revived Joker, which I will not spoil here, being the only interesting thing in the comic.
The artistic style of this book seems take everything The Return of the Dark Knight did, and then overdo it to an extreme making some characters amorphous blobs of lines and ink.
I would not recommend this book to anyone but the top tier of Batman fans, and even then, I would not pay full price for it.