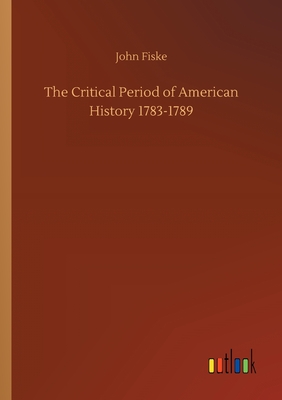 Reproduction of the original: The Critical Period of American History 1783-1789 by John Fiske Read More

Reproduction of the original: The Critical Period of American History 1783-1789 by John Fiske Read Less

All Editions of The Critical Period of American History 1783-1789

The War of Independence

The unseen world and other essays

The Jesuits in North America in the Seventeenth Century

The Old Regime in Canada

The Mississippi Valley in the Civil War

Old Virginia and Her Neighbours

The Beginnings of New England

The Confederation and the Constitutional Conventio

The 'Critical Period' has been acclaimed for a century, as John Fiske's greatest work. The book has two phases. First, he describes the compromises that went into the Articles of Confederation to bring in all the new States, then he traces the reasons for the Constitutional Convention, and a play-by-play of the negotiations that went into each of the Articles. A thread of commentary woven through the second phase, is careful notation of the decisions that planted the seeds of confrontation that led to the Civil War sixty years later. More recent accounts gloss over the proceedings of the Constitutional Convention as "secret." But Fiske found enough source material (he was Assistant Librarian at Harvard, so he had access to the special collections) to provide an amazingly detailed account.

Anyone who engages in political discussions that cite the US Constitution needs to read this book to get his/her facts straight. Once you read it, you'll realize that most alleged "strict-construction Constitutionalists" are blowing smoke. Get the facts, then challenge them.