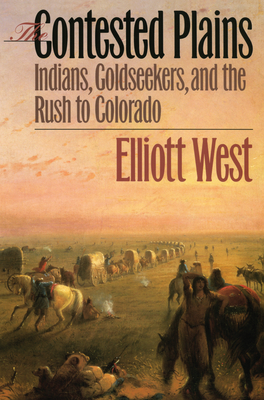 The Contested Plains: Indians, Goldseekers, & the Rush to Colorado

Deftly retracing a pivotal chapter in one of America's most dramatic stories, Elliott West chronicles the struggles, triumphs, and defeats of both Indians and whites as they pursued their clashing dreams of greatness in the heart of the continent. The Contested Plains recounts the rise of the Native American horse culture, white Americans' discovery and pursuit of gold in the Rocky Mountains, and the wrenching changes and bitter conflicts that ensued. After centuries of many peoples fashioning many cultures on the plains ... Read More

Deftly retracing a pivotal chapter in one of America's most dramatic stories, Elliott West chronicles the struggles, triumphs, and defeats of both Indians and whites as they pursued their clashing dreams of greatness in the heart of the continent. The Contested Plains recounts the rise of the Native American horse culture, white Americans' discovery and pursuit of gold in the Rocky Mountains, and the wrenching changes and bitter conflicts that ensued. After centuries of many peoples fashioning many cultures on the plains, the Cheyennes and other tribes found in the horse the power to create a heroic way of life that dominated one of the world's great grasslands. Then the discovery of gold challenged that way of life and led finally to the infamous massacre at Sand Creek and the Indian Wars of the late 1860s. Illuminating both the ancient and more recent history of the plains and eastern Rocky Mountains, West weaves together a brilliant tapestry interlaced with environmental, social, and military history. He treats the frontier not as a morally loaded term--either in the traditional celebratory sense or the more recent critical sense--but as a powerfully unsettling process that shattered an old world. He shows how Indians, goldseekers, haulers, merchants, ranchers, and farmers all contributed to and in turn were consumed by this process, even as the plains themselves were utterly transformed by the clash of cultures and competing visions. Exciting and enormously engaging, The Contested Plains is the first book to examine the Colorado gold rush as the key event in the modern transformation of the central great plains. It also exemplifies a kind of history that respects more fully our rich and ambiguous past--a past in which there are many actors but no simple lessons. Read Less

The Way to the West: Essays on the Central Plains

Growing Up with the Country: Childhood on the Far-Western Frontier

The Bulldozer in the Countryside: Suburban Sprawl and the Rise of American Environmentalism

Irrigated Eden: The Making of an Agricultural Landscape in the American West

Dispossessing the Wilderness: Indian Removal and the Making of the National Parks

The American West And The Teeth Of Life

On July 6, 1858, William Green Russell, a prospector from Georgia, discovered placer gold in streams flowing out of the Rocky Mountains. The fledgling city of Denver was established and the Colorado gold rush was on. In 1859, more than 100,000 individuals crossed the Great Plains in search of gold and of a better life. The United States was on the road to Civil War and was in the middle of a severe depression.

In his 1998 book, "Contested Plains: Indians, Goldseekers, and the Rush to Colorado" Elliott West, professor of history at the University of Arkansas, tells the story of the Colorado gold rush in a way both sweeping and intimate. The book shows great knowledge of the settlement of the west. More importantly, it reveals a deep love for its subject and personal engagement. While showing great awareness of the messiness of human history and of moral frailty, West shows balance and thought in his portrayal of turbulent, often tragic events.

The book is informed by vision and by philosophical meditation, as framed in the opening and concluding chapters. West has a strong sense of the uniqueness of human beings in history and of the way they both shape and respond to their environment. He sees the culture of the Indians and of the oncoming settlers as shaped by their own visions and imaginations of their destiny and of the good life. These visions unfortunately were inconsistent and clashed in the process of European settlement. He views different cultures as illustrating their own ongoing stories of life and of changing and following through for better or worse. While sometimes overwritten, the philosophical thrust of the book is moving and eloquent and adds a strong element of seriousness and humanism to West's account. West's book received six awards for historical writing, including the Bancroft Prize and the Parkman Prize.

The book describes the search for gold in Colorado and the growth of Denver in the late 1850s and 1860s. Its focus, however, is less on Denver than on the journey over the Great Plains and of the interactions between the Indians and the settlers. West again takes the long view by offering a history of Indian culture on the Great Plains from early prehistorical times. He shows how the culture changed and adapted over the centuries while assuming the form which clashed with the settlers only when the Indians acquired the horse and adopted a nomadic culture over the plains. West writes eloquently of this culture and of how it imagined itself while also pointing out that in the life of wandering and war resulting from the nomadic life on the plains and the exploitation of the buffalo, the Indian culture contained some of the seeds of its own destruction. The tribes were already fragmented and decimated by disease and internal wars by the 1850s. While not minimizing the cruelties of the onrushing settlers, West points out that for the most part the settlement proceeded by the settlers pursuing their own ends and visions rather than deliberately attempting to harm the Indians. The Indian culture, to oversimplify somewhat, became irrelevant to the settlers vision of life while in the earlier days the two cultures had managed to maintain an uneasy harmony.

Thus West offers a portrayal of both the Indians and the settlers in broad account and in individual detail with portraits of many persons and of their role in the events of the 1850s. For example, he describes a young couple, Nellie Buchanan and her husband, who left Kansas for the Rockies in the 1870s. They traveled for days and in the last settlement, the owner of a small house advised the couple to turn back. The Buchanans nevertheless moved forward. After many more days crossing a barren plain, they came to a covered farm wagon with a sign on its side saying "RESTURANT". The couple persisted in their journey ultimately making their home in Colorado.

The Epilogue to this book, titled "Stories in the Teeth of Life" is an apt summation of a long journey. West describes the ultimate course of the lives of many people, Indians and settlers, met and discussed earlier in the book in the course of the journey to the Rockies. These discussions of individuals are interspersed with broader, philosophical discussions of the course of events resulting in settlement and in the loss of Indian culture. West writes of the significance of the struggle between the Indians and the settlers:

"In the middle of the nineteenth century two cultures acted out two compelling visions in a land that could support only one. The inspired struggle -- of both people to enliven their dreams, of each to deny the other-- was one of the great American stories."

West points out that the victorious settlers who "celebrated the crushing of a rival vision were already suffering from the hubris of their own" in terms of their failure to recognize limits and the nature of their surroundings. West questions but does not decide whether the Indians and the settlers might have had other options which would have allowed their competing visions of life to live more together in peace. The message of the story is the nature of human frailty and the need for compassion going forward in understanding one another without condemnation. West concludes: "The question is always open. How we treat our world and each other grows from our vision of how we have come to where we are. Ultimately, of course, the issue is not survival but decency and common sense. Everything passes, the psalmist reminds us. No one escapes. The best we can hope is to learn a little from the speaking dead, to find in our deep past some help in acting wisely in the teeth of life."

"The Contested Plains" is both a detailed exploration of western settlement and a philosophical meditation on the American experience. It is a difficult, special work of history.