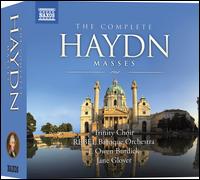 The Haydn Masses On Naxos

This eight CD box set of Haydn's complete masses is exhilarating listening. Released in 2009, the set joined complete Naxos box sets of Haydn's symphonies, string quartets, piano sonatas, concertos, and oratorios released in commemoration of the 200th year of Haydn's (1732 -- 1809) death. Of all these works, the masses remain the least well-known. This set shows they deserve a high place in Haydn's music. The recordings feature the Trinity Choir of Trinity Church, Wall Street and its soloists together with the REBEL Baroque Orchestra. They offer period performances on period instruments. The recording of the complete masses was an ambitious, long-term project on the part of Trinity. The cycle began in 2001 and concluded in 2008. J. Owen Burdick, Trinity's director of music, spearheaded the project until he left Trinity in 2008. His successor, Jane Glover, brought the project to its conclusion with the recording of the final three masses.

In this set, the enthusiasm and verve of the performances by the choir, orchestra, soloists, conductors, and organist fit perfectly with the character of Haydn's religious music. On listening to the masses, their most apparent characteristic is religious joy and radiance rather than solemnity. The music has a clearly religious character that is combined with power, lyricism, a use of secular material, and immediacy which makes it, as the composer intended, appealing to a wide audience rather than only to connoisseurs. The music reflects in part the musical tastes of his patrons, the Esterhazy's and of the Vienna of Haydn's time. But the verve is Haydn's own. The liner notes to this set quote Haydn's 19th Century biographer, Griesinger, of Haydn's attitude to religion as reflected in his music: "Altogether his devotion was not of a sort which is gloomy and forever in penance but rather cheerful, reconciled, trusting -- and in this mould his church music, too, is composed." In his symphonies and string quartets, Haydn was an innovator and did a great deal towards establishing these forms. In the masses, in contrast, Haydn took the form as he found it and used it to express his own manner of religious devotion. The performances in this set are well-conceived and well-recorded and capture the spirit of the music.

Haydn's twelve complete masses are included in this set together with his setting of the Stabat Mater. Of the masses, four were composed relatively early in his career before 1772, the final six were composed between 1796 and 1802, and only two masses date from the intervening years. Haydn set the same mass, the short "Missa Brevis" at two chronologically opposed times in his career. The first setting was in 1747 while he was still a student. Haydn returned to this setting in 1805, after he had stopped composing, and set this early piece for a larger orchestra.

On this set, two lengthy early works the Stabat Mater and the Missa Cellensis each take up a single CD. The Missa Cellensis in its baroque, rococo elaborateness is a rarely performed masterwork and one of my favorites of this collection. The remaining six CDs each include one of Haydn's final six masses. These works are consummate achievements composed after Haydn had completed his entire symphonic writing. They are large-scaled, dramatic compositions, each of which has its own individual character. These six CDs also include a work from Haydn's early or middle period to round out the set. Of these works, I most enjoyed one of the middle period masses, the "Mariazellermesse", also called Missa Cellensis, for its combination of lyricism and power.

The box set includes a detailed 81-page booklet with complete information on the recordings and brief notes by Burdick and Glover. The booklet includes an introductory essay on Haydn's masses together with commentary on each individual work by Jennifer More Glasgow, a violinist and writer from Chicago. These notes helped me a great deal in my listening.

After Naxos released the box set in 2009, it released the individual CDs at a pace of about one every other month. The individual releases concluded in April, 2011 with the release of the eighth volume. I recommend the purchase of the box set, as there is much in these works that is not well-known and that will reward lovers of Haydn or of religious music. The release of individual CDs had the advantage of allowing me to listen to each recording with an attention that frequently is difficult in a large compilation.

I was pleased to have the opportunity to hear and share my enthusiasm for Haydn's inexhaustible music in these beautiful recordings.