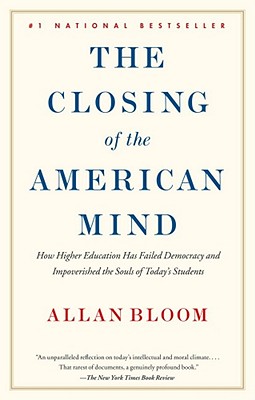 The Closing of the American Mind

Bloom argues that the social and political crisis of modern America is really an intellectual crisis and shows how American democracy has unwittingly played host to vulgarized ideas of relativism disguised as tolerance. Read More

Bloom argues that the social and political crisis of modern America is really an intellectual crisis and shows how American democracy has unwittingly played host to vulgarized ideas of relativism disguised as tolerance. Read Less

All Editions of The Closing of the American Mind

Confronting the Constitution: The Challenge to Locke, Montesquieu, Jefferson, and The...........

The Opening of the American Mind: Canons, Culture, and History

The late Allan Bloom's "The Closing of the American Mind" was an unexpected bestseller when it appeared in 1987. It is an outstanding work combining polemic against the diminution of American standards with serious thought about how we came to this impasse. Bloom's book is a testament to the power of ideas.

If "The Closing of the American Mind" captures Bloom's thought, his friend Saul Bellow's novel, "Ravelstein" (1996) captures much of Bloom the man. I think Bloom's book and Bellow's novel will be permanently intertwined in the history of American thought and literature. It is difficult to think of one without reflecting on the other.

The themes of Professor Bloom's study are stated in its title and, more explicitly, in the subtitle of the book: "How Higher Education has failed Democracy and Impoverished the Soul's of Today's Students." I tried to capture these themes in the title of this review: Education, Democracy, and Soul.

The first theme of the book is education. Professor Bloom argues that American higher education has lost its sense of purpose and direction. He finds this due to an emphasis on relativism and toleration and a reluctance to focus on questions of purpose and meaning. Similarly, Professor Bloom finds American education has become overly politicized and attuned to the concerns of the moment. He urges that liberal education return to its initial function of searching for wisdom and for self-knowledge. While not every student need pursue the liberal arts (in fact, it is a rare enterprise), Bloom finds that these studies must be available for those interested, and honored, if University education is to produce thoughtful human beings and an informed community holding values and the pursuit of truth in common. Bloom finds the source of liberal studies in ancient Greece with Socrates and his great student, Plato.

The second theme of the book is democracy, and American constitutionalism. American democracy remains a precious experiment and Bloom traces its roots to enlightenment thought, particularly in John Locke. The basic values of our system are liberty and equality. Bloom ties democratic values into a society devoted to the pursuit of empirical knowledge rather than superstition. He returns frequently in his book to Alexis de Toqueville's "Democracy and America" which captured a great deal of the promise of our country while warning of the leveling and conformity that would result from an unchecked, uncritical approach to a society in which each person's opinions counted as much as each other person's. There is much fascinating but difficult material in this book about German anti-rationalists beginning with Nietzsche and proceeding through Max Weber and Heidegger. These thinkers espoused theories, Bloom argues, fundamentally at odds with American democracy. Their theories have been vulgarized and watered-down and form the basis, Bloom argues, for the preoccupations of modern America with "life-styles" and "commitments" rather than reason. Bloom's historical discussions are difficult and move rather too quickly at times, but they are thoughtful and rewarding.

The third theme of the book is soul. For Bloom, soul is what our young people and our country are in danger of losing. Soul is at first blush exemplified by the Socratic pursuit. It is a conviction that some things are worth knowing and pursuing and it is an attempt to find them through serious enterprise. Soul is a matter of love, passion and effort. Bloom finds "soul" compromised by an attitude of relativism, of too easy commitments, and of a desire to compromise somewhat too easily in matters of love to attain the necessity of sex. Lack of soul, for Bloom, is exemplified in the pursuit of rock music by the young and not-so-young as an attempt to find an emotional high without the attendant spiritual and intellectual effort.

This book is difficult reading and there are moments when the polemics get in the way of the thought. This notwithstanding, the book is a passionate and deeply informed treatment of the life of the mind and sprit.

What have we learned? Seriously!

The author brought out prespectives on where America is. It's a perspective that I view negative to the future of filling of the soul. Where one would agree with Niesche, that God is dead. With disagreement that, God lives; supported by, and on how society is viewed. It's a perspective that I seen in and on how a structure is based upon faith and action. Characterizing society as shallow; knocking students down a level. Where the authors strongest example is of what the professor is filling the student up with. Never showing direction on where it was thought of through out the book. Waiting, waiting, waiting, was my soul; to learn by his observations. I wondered where the author stood; stating on where things are learnt and tought. The author gave a wandering view and into the sad state of ever finishing such a book.