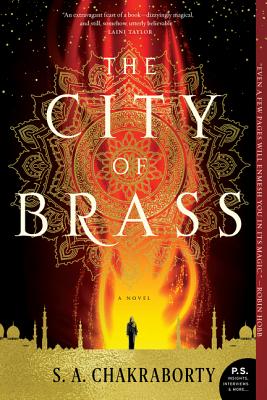 The City of Brass

by S. A. Chakraborty

Discover this spellbinding debut from S.A. Chakraborty. 'An extravagant feast of a book - spicy and bloody, dizzyingly magical, and still, somehow, utterly believable' Laini Taylor, Sunday Times and New York Times bestselling author Among the bustling markets of eighteenth century Cairo, the city's outcasts eke out a living swindling rich Ottoman nobles and foreign invaders alike. But alongside this new world the old stories linger. Tales of djinn and spirits. Of cities hidden among the swirling sands of the desert, full of enchantment, desire and riches. Where magic pours down every street, hanging in the air like dust. Many wish their lives could be filled with such wonder, but not Nahri. She knows the trades she uses to get by are just tricks and sleights of hand: there's nothing magical about them. She only wishes to one day leave Cairo, but as the saying goes... Be careful what you wish for. Read Less

All Editions of The City of Brass

Books by S. A. Chakraborty

The Kingdom of Copper

The Empire of Gold

The Book of Charlatans

The Kingdom of Copper (International Edition)

A Darker Shade of Magic

Where do I even being to discuss this chunker of a book?

A book with this much stuff in it is difficult to review, no matter which way it's tackled. Unfortunately, my review won't be as in-depth as I would like; I listened to the audiobook version, and feel like I missed out on a lot of detail doing so. Reading a physical book definitely has it's perks, especially when there are multiple titles and names to keep track of. And this book has a lot.

If you haven't read this book, if you love fantasy, if you love fantasy set in different cultures, if you love diverse characters (in many aspects), then you might enjoy this book! Set in Cairo, Egypt (at least in the beginning) The City of Brass brings a unique perspective, background, and story to the reader. Nahri is a con-artist, used to swindle people out of their money in order to make ends meet. While her motive isn't necessarily bad, seeing how she wants to one day get an education to become a real and reputable healer, she rarely reflects on the methods she takes in order to do so. Little does Nahri know that she is closer to becoming a healer than she realized, but in a way that she completely doesn't expect.

Through a mishap with one of her exploits, Nahri accidentally summons a djinn warrior, (a spirit capable of doing good or evil in Islamic mythology). Before his appearance, Nahri never believed in the supernatural, or that the magical world exists. Yet, she discovers from this ancient warrior that her fate is tied to the mythical city of brass; Daevabad.

While this is a Young Adult fantasy, it teeters on the fence and falls into an adult tale. Nahri is in her twenties. Considering some of its content, it's clearly geared towards a mature reader. It is told from the perspective of two main characters, Nahri and Ali. Ali's is a djinn prince living in Daevabad. He comes from a very different, yet, not-so-different background than Nahri. Being raised away from his royal family and learning to protect his older brother's (the future king) life no matter the cost, Ali is exposed to the hardships the "undesirable" djinn tribes have. When he is returned to the palace and appointed to take the place at the head of the royal guard, his position is flipped. He now punishes those he grew up with by order of his father. Ali struggles greatly with the justice in his new position and gets himself into compromising situations when he takes matters into his own hands.

Ali's character brings to light just how much injustice and oppression goes on between the djinn tribes in Daevabad. While certain groups are favored, others are seen as having impure blood, and second-class citizens.

On the journey to Daevabad, Nahri learns all about the djinn history and cultures. Learning that she is not entirely human, (view spoiler) make these issues all the more relevant to her situation.

The problem with a book being this long is that the beginning and end feel like two different stories. I think the disconnect comes from the varying speeds in the plot, along with the appearance and the disappearance of some characters. While this long story takes its sweet time in revealing all the pieces (okay, not really all), I felt like there were unnecessary scenes added just to distract the reader and prolonge the inevitable.

Another issue I had with this read was keeping track of all of the names. There are so many terms that I never became familiar with, and felt could have used a little more explanation or fewer variations of terms used.

Overall, this was an enjoyable read. I'm looking forward to it's the sequel The Kingdom of Copper coming out this year to see what happens next. There are a lot of loose ends that need answering, and a lot more to happen (for sure!)

Vulgarity: Quite a bit.
Sexual content: Nothing in detail, yet there are references to it, and some of the characters are often seen in harems (prostitution is obvious).
Violence: Quite a bit of graphic violence.