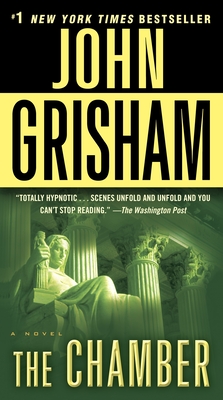 _______________________________________ There are some cases you have to take. Adam Hill is a rookie lawyer at a top Chicago firm. The world is at his feet. So why does he volunteer to represent a KKK terrorist under threat of execution? And why is the defendant happy to put his life in a novice's hands? The answer lies twenty years in the past, but there are darker, more shocking secrets to be uncovered... _______________________________________ 'A master at the art of deft characterisation and the skilful delivery of hair-raising crescendos' - Irish Independent 'John Grisham is the master of legal fiction' - Jodi Picoult 'The best thriller writer alive' - Ken Follett 'John Grisham has perfected the art of cooking up convincing, fast-paced thrillers' - Telegraph 'Grisham is a superb, instinctive storyteller' - The Times 'Grisham's storytelling genius reminds us that when it comes to legal drama, the master is in a league of his own.' - Daily Record 'Masterful - when Grisham gets in the courtroom he lets rip, drawing scenes so real they're not just alive, they're pulsating' - Mirror 'A giant of the thriller genre' - TimeOut Read Less

All Editions of The Chamber

A Time for Mercy

the atmosphere and tension was there from the first chapter,right to the end you were not sure which way it would end

Lofty Goals That Are Not Quite Realized

This is a book that sets some lofty goals, but doesn?t quite reach them. Adam Hall is a young lawyer who asks to work on the case of Sam Cayhall, a member of the KKK who is about to be executed for a bombing he committed in the 1960s. Why does Adam want a case that is all but lost? The answer isn?t very surprising. The characters grow very little and are, on whole, pretty unlikeable. Tension is missing in part because of the lack of depth in the characters and in part because the case is so hopeless. The framework is there ? the volatile 1960s; the KKK member who might change or might not, but who could be an interesting psychological study either way; a family that could be freed from its secrets or not, but again, it could be interesting either way ? unfortunately, nothing all that interesting does happen, and it?s hard to be invested in characters that are not fully drawn.

The Chamber, a milestone of true life. It covers some heavy subjects but none the less the author is very specific about each and takes you through life as it was. It's a trip of suspension, assault, and eventually tears.
It's a truth of reality of what happens years ago. It makes you stop and trying to get a clear understanding as to why and how people could be so cold and hardhearted. It takes you somewhat into the acts of the KKK. But as it drives on, it shows you how one man accepted all his responsibilities for error and made himself ready to die even knowing he did not want too but except the fact that even if not guilty of what he was dying for he was guilty of murder, not once but many times.
You feel how he's changed and how he wants to be remembered but most of all to know that when he died there was someone who cared and loved him that was left behind. This mattered more than anything. To leave this world knowing you were truly loved.
While sitting and waiting, he repented and asked forgiveness from God. He had time to think and took it; whereas his lawyer, his nephew, let's us know that his environment did not give him much choice...even though at the end he wished it had and he taken the same direction his son and others took. Walked away. He didn't. Now he had to pay the price.
You walk with this man through his last days, hours, minutes, seconds all the way to the Gas Chamber as if at any given point you wanted him freed. You wait for someone to step in and say he's gotten another chance or he talked and gave the name of his partner. It doesn't happen, you follow him to the end of his life, you follow the last 4 or 5 chapters in tears for this man who has changed and become humble in the eyes of God. But with all the guilty he lived with, in death he really became free.
It's an outstanding book, I loved it. It's slow but once you start you can't seem to put it down, there's a deep desire to keep going; to know the ending. Will he be freed or will he die innocent as is so much of what is happening in today's system.