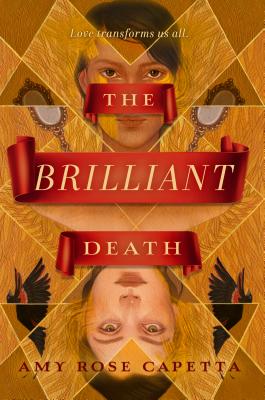 From the author of "Entangled" comes a lush, Italian-inspired fantasy romance about a Mafia daughter who magically turns herself into a boy to fight for her family's honor and her father's life. Read More

From the author of "Entangled" comes a lush, Italian-inspired fantasy romance about a Mafia daughter who magically turns herself into a boy to fight for her family's honor and her father's life. Read Less

All Editions of The Brilliant Death

Books by A R Capetta

Thank you to Bookish First and the publisher for providing me a copy to review.

This book really reminded me of An Enchantment of Ravens as it was short (around 330 pages) but it felt like I was reading a much longer narrative. The prose was well written and the plot moved rather fast; there weren't any scenes that didn't contribute to the overall plot of the book. The story did end wrapped up but there is definitely room for the author to write a sequel if they chose.

My favorite part of the book was the magic. In Vanalia, those with magic are called Strega, which is Italian for Witch and that makes total sense considering that the setting is Italian inspired, and they aren't loved but they aren't exactly persecuted. Teo, the MC, had magic that was almost like a whole other character. It had a temper and sometimes did what it wanted. Also, I am not going to spoil it but Teo's ability is awesome and so unique. And speaking of magic there is Cielo, Teo's meet-cute friend to lover and a totally awesome character! Cielo is a shapeshifter as long as they have their book with spells. Though I enjoyed the magic, I wish that The Brilliant Death was explained better especially since it was a key feature of the story.

This book was quite queer. Cielo and Teo are both genderfluid. I really liked that Capetta wrote these characters the way that she did because I haven't heard of many books where there is one genderfluid character let alone two and in a relationship, which I totally ship by the way.

The setting of Vanalia was quite interesting though I wish that Capetta went into more detail on who the Capo is. I understand that he is trying to usurp the families that rule to "unify" the land but I didn't really know who he was and I want more of a backstory on him. One thing that I didn't really get vibes of is the "Mafia-style" of the families that the synopsis promises. Yes, they were a bit ruthless but the fate of their world is at stake here so I can understand why they do what they do.

The other characters besides Cielo and Teo were not the best but they were also not the worst. Teo's brother, Luca was sweet and I wish that we could have had more time with him. Then there is Teo's other brother, Beniamo was a complete terror that deserved more then he received.

Overall, I definitely enjoyed this novel and I am excited to read other books that Capetta has written.

The Brilliant Death by Amy Rose Capetta has to be one of my favorite reads of the year. I loved how she created a powerful individual through Teodora DiSangro and her unique personality really strikes a chord with readers. Capetta referenced her Italian-inspired influences into a highly colorful narrative which blended into the story so seamlessly.

I also wanted to commend Capetta for creating Cielo. Capetta found a very natural way to be inclusive of a gender fluid individual and, even more so, took on a powerful stance on gender definitions. It's refreshing when authors break gender barriers by equipping themselves with the great faculty of storytelling.

Altogether I found this is a book that takes fantasy to a higher level.