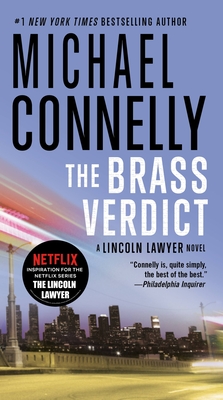 When down-at-heel lawyer Mickey Haller gets the news that his old colleague Jerry Vincent has died, he also gets an unexpected windfall. Jerry had left instructions that Mickey should inherit all of his clients - putting Mickey's stalled career back on track at a stroke. Not only that, but Vincent was about to go to bat for Walter Elliott, the Hollywood mogul accused of brutally slaying his wife and her lover, in a trial that promises big fees and an even bigger place in the media spotlight. If Mickey could find the magic ... Read More

When down-at-heel lawyer Mickey Haller gets the news that his old colleague Jerry Vincent has died, he also gets an unexpected windfall. Jerry had left instructions that Mickey should inherit all of his clients - putting Mickey's stalled career back on track at a stroke. Not only that, but Vincent was about to go to bat for Walter Elliott, the Hollywood mogul accused of brutally slaying his wife and her lover, in a trial that promises big fees and an even bigger place in the media spotlight. If Mickey could find the magic bullet and win that one against the odds, he'd really be back in the big leagues. The only problem is that Vincent was murdered, shot at close range in his office garage. And the detective handling the case - a certain Harry Bosch - is convinced the killer must be one of Vincent's clients. Suddenly Jerry Vincent's legacy is beginning to look more like a poisoned chalice, and Mickey is faced with the biggest challenge of his career: how to successfully defend a client who might just be planning to murder him. Read Less

2014, Orion (an Imprint of The Orion Publishing Group Ltd ), London

2009, Orion (an Imprint of The Orion Publishing Group Ltd ), London

2009, Orion (an Imprint of The Orion Publishing Group Ltd ), London

All Editions of The Brass Verdict

The Law of Innocence

Another classic Connolly page turner with both of his anti-hero characters: Mickey Haller & H. Bosch. If you'ver liked the others you'll love this - & boyoboy, does it get complicated at the end. There are few other authors in this genre that write as believable a story. It's like revisiting those old H. Bogart movies in print (do you think the HB initials are a coincidence?)

A Good Lawyer is Hard to Find

The second in the ?Lincoln Lawyer? series by Michael Connelly, The Brass Verdict presents more adventures of the nonconformist, conflicted defense attorney, Mickey Haller. Torn between the love of a job in which he excels and the moral ambiguity, Mick continually walks a tight rope between doing the right thing and doing the ethical thing. It?s a balancing act that seems to keep him hot water with someone all the time.

The ending hints that Mr. Connelly might be ending this series. That would be too bad because this cocky, but moral, lawyer is a nice counterpoint to his tough guy cops.

Apparently, way back in The Black Ice Michael Connelly gave Detective Harry Bosch a half brother. Guess who that brother is--Mickey Haller, the Lincoln Lawyer. The Brass Verdict is Mickey's second outing as a Connelly lead, and in this book he works closely with--and, in the manner of defense lawyers in crime fiction everywhere, subtly against, Detective Bosch.

Mickey Haller has been out of circulation since the events of The Lincoln Lawyer. Having hit rock bottom after developing a dependency on prescription heroin Oxycontin, pulled himself up and gone through rehab, he's taken an extended sabbatical from practicing law. He's not even sure he's ready to resume his practice when he gets a call informing him that he's inherited the practice--31 active cases--of murdered friend and colleague Jerry Vincent. The highest profile of these cases is a doozy, a double murder charge against movie producer Walter Elliott, accused of killing his wife and her lover.

It becomes obvious to all, as it has been to Harry Bosch from the start, that not only is there a connection between the murder of Jerry Vincent, but that there's something rotten at the core. He enlists the reluctant assistance of Haller, using him as bait to flush out Jerry Vincent's killer. Along the way more lives are lost, some are ruined, and Haller's and Bosch's are both changed forever.

Michael Connelly rarely disappoints, and once again he's done a great job of getting the job done. Mickey Haller is a terrific first person narrator: a good lawyer, mostly ethical but not above working the system to achieve the results he wants. And Harry Bosch, well, who doesn't love Harry Bosch? He's deep and intense, hard to know, dry almost to the point of aridity, but with fascinating flashes of humor.

Okay, but rather skimpy and predictable (3.5 *s)

This book has some elements of what Connelly fans want to see: street-smart insightfulness, like the recognition that ?Everybody lies. Cops lie. Lawyers lie. Witnesses lie. The victims lie. A trail is a contest of lies?; or, that ?brass verdict? is a term for deadly street justice when the legal system does not deliver; and familiar characters like long-time favorite detective Harry Bosch and recent addition, the Lincoln lawyer, Mickey Haller. The story line is really quite simple. Haller is assigned the entire case load of fellow lawyer Jerry Vincent when he is found murdered in his car, which includes the case of Hollywood mogul Walter Elliot, who apparently shot his wife and her lover at their Malibu beach home.

The story hardly comes charging out of the box. Because Vincent?s laptop was stolen, Haller spends a great of time reconstructing case details and representing clients guilty of a series of petty infractions. Bosch comes on the scene because, unbeknownst to Haller, Vincent has been under scrutiny because of possible shading dealings including the Elliot case. The interactions between Bosch and Haller are bizarrely brief, antagonistic, and awkward, including a scene where Bosch attempts to intimidate Haller with an attempted break-in. Bosch does not come across as the crusty, cool guy that fans are used to. The book is best at watching Haller, step-by-step, undermine seemingly slam-dunk evidence in the Elliot trail.

The only interesting character angle is Haller?s return from a year?s hiatus due to recovery from a gunshot wound and subsequent addiction to painkillers. The plot has a couple of nice twists and one or two improbabilities, but over all is not overly complex. Even Haller gets taken by the lies that he knows always exist. It?s likely that most will be aware well before the end of the book of the person orchestrating the crime behind the crime. The book is nice enough but does suffer from the aforementioned minimalist, if not strange, depiction of characters and not particularly inspired plot.

Not to be missed

I had read a review that questioned the ending of the story as contrived or weak. Well, it is a little confected, but when you are reading Michael Connelly, you are in the hands of a master, and you don't care that much about the way he fashions the solution. Every page along the way is worth the journey, and most of all, his people are. The story absorbs you, but you love the characters.
I wonder whether Connelly was at the point of wondering how much more mileage he could legitimately expect from Harry Bosch, and so created Mickey Haller (The Lincoln Lawyer). Then, in this new plot, he has brought them more or less together. I say "more or less" because their relationship does not drive the plot, and Harry, with his outsize personality and glaring faults, does not equal out with Haller here. But the skill with which Connelly builds his characters is immense. I would never miss a new Connelly, and this one is more than worth every minute.