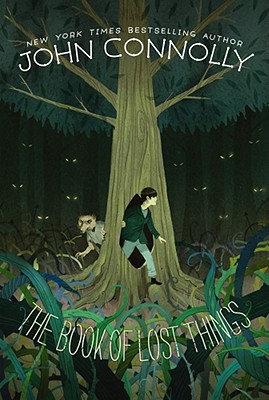 The Book of Lost Things

In his attic bedroom, 12-year-old David mourns the death of his mother. He is angry and alone, with only the books on his shelf for company. But those books have begun to whisper to him in the darkness, and as he takes refuge in his imagination, he finds that reality and fantasy have begun to meld. Read More

In his attic bedroom, 12-year-old David mourns the death of his mother. He is angry and alone, with only the books on his shelf for company. But those books have begun to whisper to him in the darkness, and as he takes refuge in his imagination, he finds that reality and fantasy have begun to meld. Read Less

All Editions of The Book of Lost Things

The Dirty South, Volume 18: A Thriller

A Book of Bones: A Thriller

How to Find the Best Doctors: New York Metro Area

How to Find the Best Doctors: Metropolitan Chicago

This book is great. I enjoyed it so much
I am saving it for my grandson when he gets older. The book is for mature readers.

I thoroughly enjoyed this book, as it was something quite different. I had read Every Dead Thing a few years ago by this author which I also enjoyed but not like this book. He takes children's fairy tales and incorporates into a story for adults, with twists and turns, that in the end makes you wonder, was it just a fairy tale, or did it actually really happen. You decide for yourself!!! I'm still thinking about it. Good read for those who like something quite different.

I've put this book back on the bookstore shelf many times. It sounded like a good book but wasn't sure. Finally picked up and read it. This is probably one of the best books I've read all year. The story is engaging and the use of the classics in telling the story is incredible. I have already recommended this to friends. A Great Read.

I have read a number of other books by John Connolly, but none of them is like this. This tells the story of a boy, David, in England who loses his mother, apparently to cancer, just before the beginning of WWII. Within six months, his father has met another woman (Rose), who becomes pregnant. David and his father move into her family house, and they are soon joined by the new baby Georgie.

During this period, David has been having "attacks" (they sound like epileptic seizures) for which he is under a psychiatrist's treatment for a time, though that stops when they move out of London to Rose's place.

I don't want to give away much more of the plot, except to say that fairy tales have a lot to do with what transpires. The book, in its own thoughtful way, is a reflection on loss and growing up (as in maturing, not just getting older). Though the book is largely serious, the chapter on Snow White and the Seven Dwarves is hilarious.

Those who have read other books by Connolly know that they can be gruesome. That element is not missing here, but it is not as prominent as in some others. I would not hesitate to recommend this to any young person who can handle the gruesomeness, nor to any adult who has an appreciation for fairy tales and fantasy, and the fact that they are usually more real and more true than what we read in the newspaper.