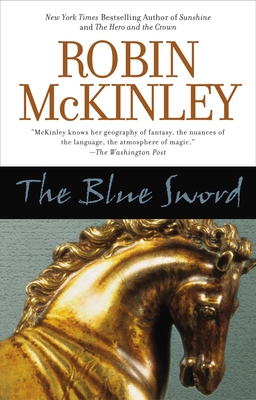 Harry, bored with her sheltered life in the remote orange-growing colony of Daria, discovers magic in herself when she is kidnapped by a native king with mysterious powers. Read More

Harry, bored with her sheltered life in the remote orange-growing colony of Daria, discovers magic in herself when she is kidnapped by a native king with mysterious powers. Read Less

All Editions of The Blue Sword

Beauty: A Retelling of Beauty and the Beast

The Hero and the Crown

fantasy classic for all ages

This story was written in the early wave of modern feminist fantasy, as the author was one of those fantasy-loving girls who saw no stories with strong female protagonists (or, if you're talking Tolkien, any strong females, period) while growing up. Ms. McKinley remedied that by writing what she wanted to read as a girl.
To the story: it concerns a girl called Harry, who finds herself thrust into the care of her older brother, Richard, a military attache stationed abroad, when their father dies. She has no money of her own, no dowry or beauty to tempt suitors, and realizes upon arrival in this new world that she doesn't really know her only sibling anymore. For the setting, think late British Empire India, with England renamed the Homeland, and the Darian sub-continent standing in for the wilds of India.
When the king of Damar kidnaps Harry at the urging of his magical sixth sense (rather than his libido), he and Harry must determine why exactly she's there, and what she can do for the future of Damar before the demonic North rushes through their valleys and destroys Homelanders and Damarians alike. Is she a figurehead? A warrior? A general? A peacemaker? Or something else entirely? Exciting, insightful, warm, true, and even funny. Great battle scenes, realistic conversation, and layered characters make this "young adult" fantasy one that's easily enjoyed by anyone.