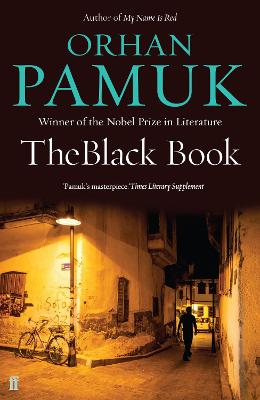 The Black Book is Orhan Pamuk's tour de force, a stunning tapestry of Middle Eastern and Islamic culture which confirmed his reputation as a writer of international stature. Richly atmospheric and Rabelaisian in scope, it is a labyrinthine novel suffused with the sights, sounds and scents of Istanbul, an unforgettable evocation of the city where East meets West, and a boldly unconventional mystery that plumbs the elusive nature of identity, fiction, interpretation and reality. Read More

The Black Book is Orhan Pamuk's tour de force, a stunning tapestry of Middle Eastern and Islamic culture which confirmed his reputation as a writer of international stature. Richly atmospheric and Rabelaisian in scope, it is a labyrinthine novel suffused with the sights, sounds and scents of Istanbul, an unforgettable evocation of the city where East meets West, and a boldly unconventional mystery that plumbs the elusive nature of identity, fiction, interpretation and reality. Read Less

All Editions of The Black Book

What am I to do, oh readers, for I do not recognize myself. I have read the Black Book and am transformed. I am not a nihilist who absorbing the dark fruit of the Black Book's heart-rending conclusion nor an anarchist; for the Black Book shows the foil of living under half-lit regimes
I am not a modernist, the Black Book details the past's ragged urging to be recalled, nor traditionalist, for the author Orhan Pamuk clearly illustrates the folly of doctrinaire beliefs, be they secular, political, religious or even, (God help us) romantic.
In a magazine article, Mr. Pamuk described Istanbul, the setting of this novel as having "no symmetry, no sense of geometry, no two lines in parallel." The same can be said of the Black Book's plot.
Though I am no hedonist, feminist, satirist, cynic, nor even lotus-eater, I AM wistfully numinous. The Black Book is filled with Sufi ("Hurufi") references to Islamic numerology and mystical sensibilities. The delicate threads of the plot inspire me with the same maniacal passion for the Orahn Pamuk, that Jelal, elusive essayist and one of the book's central characters enjoys among the Istabullis . Make no mistake, The Black Book is marvelous fiction.
Jelal's weary dance with the absurd realities of Turkish life compels him to capture that grand madness in daily columns depicted throughout the book. The essays rightfully become the stuff of national obsession. The chapter entitled, "The Day the Bosphorus Dries Up," is alone worth the price of the book.
Ruya (meaning "dream") is the book's missing link. Her disappearance is the central mystery of the story and a great ordeal to her husband Galip, the book's sweet, bemused protagonist. Once again, Mr. Pamuk gives us brilliant play on the nature of identity. Galip mimics Jelal's personae while searching for Ruya, his missing wife. When Jelal's newspaper column is threatened by his disappearance, Galip substitutes his own writing for Jelal's. Thusly, Galip fulfills a long-held desire to meet Jelal's creative skill.
Something essential is given continuity by Galip's absorption of Jelal's art. And much of the Baclk Book's subtext is about continuity or the lack thereof. While Galip searches for Ruya and Jelal (his cousin), he sleuths through the unlit corners of Jelal's obsessively private life. In one of my favorite passages, Galip discovers Jelal's hidden apartment furbished with garrulous fixtures from thier shared and lost childhood.
Sufi themes abound in the Black Book which call to mind further notions of identity and the sense of historical estrangement. "Modern" Turkish life is lived with blunted access to a colorful, if interrupted, past. Sufi symbols from Ottoman times in the storyline exist alongside reminders that these Orders were eradicated a single decree of Ataturk, Turkey's great modernizer. Mystical references are clue to an important theme of the author: the right to know what the inheritances of the past are in relation to the present.
Ruya, gone without explanation, is presumed by Galip to be with Jelal, who is her half-brother. While the reader doesn't observe her directly, neither it seems, does Galip, her husband, even when she is fully present. What we do observe of her is the awe and wonderment she inspires. She manages to signify both feminine spirit and palpable disillusionment with the role. Galip never questions why she leavesor what she does (and doesn't do). He is compelled by love to find her in what becomes a contemporary twist on the classical (Sufi) theme of "search".
In the Black Book we see a land we may come to inhabit as the new millenium injects stranger and stranger ciphers into our lives. Mr. Pamuk appears to being saying that all the willfulness of our times cannot interpret these "signs" if they are read out of context.
Though dense, the Black Book is brilliantly written for those who prefer a mystery that remains . . . mysterious. It suggests powerfully, that love is the best reason we have to plod on. It also suggests we are more "alive" when tending our enigmas. Bravo, Orhan Pamuk, I am so drunken with your prose: though of revelry and Istanbul, I have no tale to tell.

This many layered book is intensly visual, creating images that linger long after the plot line fades. The narrative has a dream-like quality, moving through time and memory, space and imagination. I cared deeply not only about the narrator (Galip) but also about Celal Bey, the central character known only through his writing.

I wanted this book to never end.