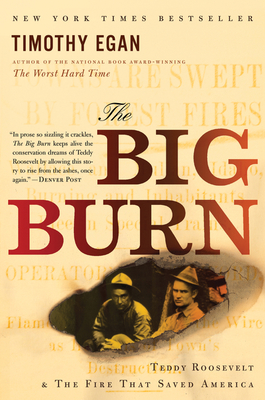 The Big Burn: Teddy Roosevelt and the Fire That Saved America

In "The Worst Hard Time," Egan put the environmental disaster of the Dust Bowl at the center of a rich history. Now he performs the same alchemy with this story of the largest-ever forest fire in America, painting a moving portrait of the people who lived through the disaster. Read More

In "The Worst Hard Time," Egan put the environmental disaster of the Dust Bowl at the center of a rich history. Now he performs the same alchemy with this story of the largest-ever forest fire in America, painting a moving portrait of the people who lived through the disaster. Read Less

All Editions of The Big Burn: Teddy Roosevelt and the Fire That Saved America

The Worst Hard Time: The Untold Story of Those Who Survived the Great American Dust Bowl

A Pilgrimage to Eternity: From Canterbury to Rome in Search of a Faith

The Good Rain: Across Time & Terrain in the Pacific Northwest

Lasso the Wind: Away to the New West

From the beginning, this is a story of out-sized characters and immense events that had a profound effect on the US, both in the immediate aftermath and the long-term. It is the story of Teddy Roosevelt and his chief forester, Gifford Pinchot; how they carved out millions of acres to protect for our posterity and how a raging inferno (that burned over 3 million acres) got the attention of the populace to protect that which remained.

This is Teddy and Gifford's story of how they outsmarted the lumber conglomerates, wealthy industrialists and crooked Senators to create millions of acres for all Americans, instead of a few rich men earning more profits. Their goal was to create a renewable resource for the ages through conservation. Some may see this first third of the book as slow; I feel it was critical information about how the vision of 2 men has given us a treasure beyond value. The political scene at the time of the beginning of the forestry service is important to understand.

When Teddy retired from the presidency, the special interests waged war against the forestry service and their employees. The crooked senators and their allies cut and belittled the service until little more than the "little GP's" (Gifford Pinchot's specially selected and trained foresters) remained. Then the crippled agency was ordered to put out wildfires! No additional money was offered to do this; 'little GP's' usually gave out of their own nearly-empty pockets to hire firefighters and buy more supplies and food.

Egan's prose drives the reader faster-and-faster through the horror of the raging fires. Whether people lived or died was capricious; the stories of heroism under fire (pun intended) were amazing. The Buffalo Soldiers of the Army's 25th Infantry served their country proudly under appalling conditions. The foresters and the Infantry created their own miracles because neither President Taft nor Congress lifted a finger to help.

During the last third of the book, I had to read in measured doses; my blood pressure stayed in the stratosphere. The only downside with listening to a talking book was the fact that the photos were not available. I'll have to check out a copy of the text to see the photos accompanying this remarkable story.

An interesting, exciting read. Though this work is about the major forest fire of 1910, it is also the story of the beginnings of the conservation movement, such as it is, in the US. Teddy Roosevelt and Gifford Pinchot were instrumental in setting aside millions of acres of forest despite corrupt politicians and robber barons. The politicians and robber barons attempted to starve the forest service to death but then came the big burn and the heroic stories that came out of it. The forest service received more funding to build roads and lookouts to better respond to forest fires. However, the ending of this work is somewhat depressing because the national forests were opened to robber barons who denuded the slopes of trees with their clear-cutting operations using the roads built by taxpayer money. Though now I think the major lumber companies have seen the light because they need trees and clear cutting without reforestation would mean they would lose their resource.