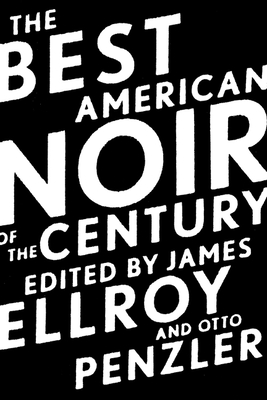 The Best American Noir of the Century

A magisterial anthology of American noir writing in the 20th century by the best-selling author of the LA Quartet: The Black Dahlia. The Big Nowhere , LA Confidential and White Jazz. In his intoduction to The Best American Noir of the Century, James Ellroy writes, "noir is the most scrutinised offshoot of the hard-boiled school of fiction. It's the long drop off the short pier and the wrong man and the wrong woman in perfect misalliance. It's the nightmare of flawed souls with big dreams and the precise how and why of the ... Read More

A magisterial anthology of American noir writing in the 20th century by the best-selling author of the LA Quartet: The Black Dahlia. The Big Nowhere , LA Confidential and White Jazz. In his intoduction to The Best American Noir of the Century, James Ellroy writes, "noir is the most scrutinised offshoot of the hard-boiled school of fiction. It's the long drop off the short pier and the wrong man and the wrong woman in perfect misalliance. It's the nightmare of flawed souls with big dreams and the precise how and why of the all-time sure thing that goes bad." Offering the best examples of literary sure things gone bad, this collection ensures that nowhere else can readers find a darker, more thorough distillation of American noir fiction. James Ellroy and Otto Penzler, series editor of the annual The Best American Mystery Stories, mined one hundred years of writing - 1910-2010 - to find this treasure trove of thirty-nine stories. From noir's twenties-era infancy come gems like James M. Cain's "Pastorale," and its post-war heyday boasts giants like Mickey Spillane and Evan Hunter. Packing an undeniable punch, diverse contemporary incarnations include Elmore Leonard, Dennis Lehane, Patricia Highsmith and William Gay, with many page-turners appearing in the last decade. Read Less

All Editions of The Best American Noir of the Century

The Promise of the Child: Volume One of the Amaranthine Spectrum

The Black Lizard Big Book of Pulps: The Best Crime Stories from the Pulps During Their Golden Age--The '20s, '30s & '40s

An Anthology Of Noir Stories

I needed a wedge to get into this lengthy anthology "Best American Noir of the Century", which consists of 39 stories and over 730 pages. My wedge was David Goodis (1917 -- 1969), a writer I have come to know through the Library of America. David Goodis: Five Noir Novels of the 1940s and 50s (Library of America)A 1953 Goodis short story unknown to me, "Professional Man", is included in this volume, and I was hooked. Set in his native Philadelphia, Goodis' story tells the story of Freddy Lamb, who holds down a job as an elevator operator during the day and works a job as a killer for the mob during the night shift. As with so much of Goodis, Lamb, is lonely and vulnerable. The story describes his relationship to his boss and to a stripper, Pearl, whom he loves. It does not end happily. I was glad of the opportunity to read this story which became an episode in Showtime's "Fallen Angels" in 1995.

Not all of this volume is on the level of the Goodis, but the book offers the reader the opportunity an opportunity to read a great deal of short noir fiction written between 1923 and 2007. The volume is edited by novelist James Elroy, whose story "Since I don't have you" appears in the book and by Otto Penzler, the founder of the Mysterious Bookshop and the Mysterious Press. Elroy and Penzler each wrote introductions to the book which describe the nature of noir fiction and its relationship to film and to other forms of genre writing such as detective or crime stories. Penzler, for example, writes, "[n]oir works, whether films, novels, or short stories, are existential, pessimistic tales about people, including (or especially) protagonists, who are seriously flawed and morally questionable. The tone is generally bleak and nihilistic, with characters whose greed, lust jealousy, and alienation lead them into a downward spiral as their plans and schemes inevitably go awry." He writes further that the "lost characters of noir" are "caught in the inescapable prisons of their own construction, forever trapped by their isolation from their own souls, as well as from society and the moral restrictions that permit it to be regarded as civilized."

Most of the stories in this volume were published initially in the pulp or detective magazines that flourished until the early 1960s. But much of the volume includes recent noir stories from the 1990s and beyond. The only story in the book that I had read earlier was "Pastorale", a 1928 work by James Cain. Many of the writers, however, will be familiar to readers of noir. Besides Cain and Goodis, the authors in this collection included Evan Hunter, Jim Thompson, Cornell Woolrich, Elmore Leonard, Patricia Highsmith, and, even, Mickey Spillane. There are stories by famous writers who made their reputations in writings other than noir, including MacKinlay Kantor, and Joyce Carol Oates. Many of the other stories in the book are by authors that had earlier been unfamiliar to me.

Ellroy and Penzler have written short introductions to each of the stories in the volume which are useful in learning more about the authors and their works. For example, I learned about Scott Wolven whose fine story "Controlled Burn" appears in this book, taken from Wolven's acclaimed volume of short stories of the same name. I learned as well about Lorenzo Carcaterra, whose 2007 story "Missing the Morning Bus" concludes the anthology. Oddly enough, David Goodis is treated critically in the introduction to "Professional Man" as the editors write: "[a]lthough his early novels and some short stories are powerful and memorable, his later work is so hopelessly dark that he has failed to maintain his place among the top rank of noir or hard-boiled writers." This is a dubious verdict, given the publication of the LOA volume of Goodis novels in 2012, two years after the publication of Ellroy's and Penzler's anthology.

Besides the Goodis and the Cain stories, I enjoyed the first story in the collection, Tom Robbins' 1923 "Spurs", which became the basis for an early noir movie about carnival life titled "Freaks". Other strongly noir and disturbing stories include Kantor's "Gun Crazy", "A Ticket Out" by Brendan DuBois, James Lee Burke's "Texas City, 1947", and Andrew Klavan's "Her Lord and Master."

The length of this collection and the unfamiliarity of many of the titles will make this book more appealing to readers familiar with noir rather than to those new to the genre. The book is valuable not only for its contents but also because it gathers together magazine stories that would otherwise be difficult to find. Readers wanting an introduction to the noir genre through novels rather than short stories might well be interested in the Library of America's two-volume collection of noir novels from the 1930's, 1940's and 1950's. American Noir: 11 Classic Crime Novels of the 1930s, 40s, & 50s (Library of America) Many of the writers in this volume are represented by some of their best works, including James Cain, Patricia Highsmith, Jim Thompson, Cornell Woolrich, and David Goodis.