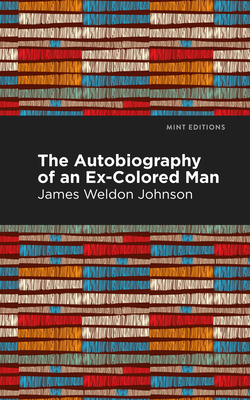 The Autobiography of an Ex-Colored Man

In James Weldon Johnson's emotionally gripping and poignant look into race relations, a half-white half-black man of very light complexion must choose between his heritage and the art that he loves and the ability to escape the inherent racism that he faces by passing as a white. Read More

In James Weldon Johnson's emotionally gripping and poignant look into race relations, a half-white half-black man of very light complexion must choose between his heritage and the art that he loves and the ability to escape the inherent racism that he faces by passing as a white. Read Less

All Editions of The Autobiography of an Ex-Colored Man

James Weldon Johnson: Writings (Loa #145): The Autobiography of an Ex-Colored Man / Along This Way / Essays and Editorials / Selected Poems

The autobiography of an ex-coloured man

Along This Way: The Autobiography of James Weldon Johnson

Incidents in the Life of a Slave Girl

Many novels of the African-American experience in the United States use the theme of "passing". These novels generally involve a light-complexioned African-American who can "pass" for white. Among other things, novels based on a theme of "passing" allow the character and the author to comment upon black-white relationships in the United States from both sides -- from the black experience and from the white experience.

Both white and black authors have made extensive use of the theme of "passing". The earliest novel involving "passing" of which I am aware is by William Dean Howells in his short 1891 book, "An Imperative Duty" which dealt with an inter-racial marriage. The African-American novelist Nella Larsen wrote a novel titled "Passing" set in the Harlem Renaissance. More recently, Philip Roth's novel "The Human Stain" involves the story of Professor Coleman Silk, a distinguished academic and student of the classics who passes for many years as white.

Coleman Silk is the successor to the protagonist of James Weldon Johnson's only novel, "The Autobiography of an ex-colored Man" written in 1912. The unnamed protagonist of the book is an individual, like Roth's character Coleman Silk, with great intellectual and artistic gifts who is torn between the opportunities open to him as an, apparently, white person and his strong sense of black identity. Like Coleman Silk and the characters in most novels involving the theme of "passing", Johnson's protagonist marries a white woman and lives a life plagued with guilt regarding his abandonment of his heritage as an African-American. Johnson's short novel is, to my mind, the best written on the theme of "passing", and it is a fine novel indeed. The book initially was published anonymously. The writing is so powerful and believable that many readers took the book for a true autobiography until Johnson acknowledged his authorship in 1914. Many years later, Johnson wrote his own autobiography, titled "Along This Way" in part to show that the story of his own life was not the story of the protagonist in the "Autobiography".

Johnson's story shows how his protagonist goes back and forth, both internally and in the outward events of life, about whether to make his way in the white or in the black world. He ultimately finds himself successful but unhappy. In addition to the story line of the book, Johnson uses the "passing" theme to allow many reflective passages by characters in the book on racial relationships in the United States early in the 20th Century. The most famous such scene occurs as the protagonist travels in a "smoking car" for whites on a train in the segregated South. He participates in a discussion among several white men of varied backgrounds on the "race question" as it was viewed at the time. There is also a chilling scene in the book involving a lynching, the burning alive of a black person. Johnson worked fervently in the latter years of his life to secure the passage of anti-lynching legislation in Congress.

But Johnson's novel includes a great deal more than a consideration of race issues. The book offers an outstanding picture of life in early twentieth Century America -- in the South and in Johnson's beloved New York City. The book is filled with pictures of dives and gambling dens and of the trade of cigar making in both South and North. It is filled with the love of the piano and of classical music. Most strikingly, the book has the spirit and feel of ragtime, which reached the height of its popularity during the years in which the book appeared. Johnson shows great appreciation for this product of American culture.

The book also illustrates some universal themes. The protagonist is troubled, specifically, by the conflict between his identity as an African-American and his wish to succeed as a white person. But the broader themes of the book are the consequences of lack of self-knowledge, the role of chance in human life, and the consequences of a certain sense of purposelessness and frustration, which plague many individuals separately from any consideration of race. Johnson develops these themes eloquently and ties them in well with his theme of "passing".

Johnson's novel is an important work of American fiction which deserves to be read.

I enjoyed this book, it is an excellent read. Very quick ship too. I highly recommend seller, item was received in a timely manner. Professionally packaged also.