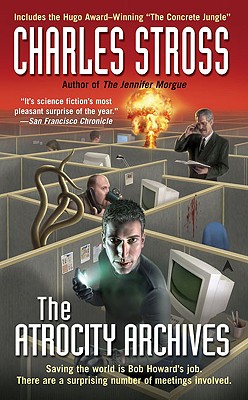 Secret intelligence agencies, esoteric theorems, Lovecraftian horrors, Middle East terrorist connections, a damsel in distress, and a final battle on the surface of a dying planet round out this offbeat story. Read More

Secret intelligence agencies, esoteric theorems, Lovecraftian horrors, Middle East terrorist connections, a damsel in distress, and a final battle on the surface of a dying planet round out this offbeat story. Read Less

All Editions of The Atrocity Archives

The Collected Stories of Vernor Vinge

A Gibbering about Madness

Alien it indeed was to all art and literature which sane and balanced readers know, but we recognized it as the thing hinted of in the forbidden Necronomicon of the mad Arab Abdul Alhazred...As we hastened from that abhorrent spot, the stolen amulet in St. John's pocket, we thought we saw the bats descend in a body to the earth we had so lately rifled, as if seeking for some cursed and unholy nourishment. But the autumn moon shone weak and pale, and we could not be sure. So, too, as we sailed the next day away from Holland to our home, we thought we heard the faint distant baying of some gigantic hound in the background. But the autumn wind moaned sad and wan, and we could not be sure.We know things, he said, only through our five senses or our religious intuitions; wherefore it is quite impossible to refer to any object or spectacle which cannot be clearly depicted by the solid definitions of fact or the correct doctrines of theology -- preferably those of the Congregationalists, with whatever modifications tradition and Sir Arthur Conan Doyle may supply.The witchcraft terror is a horrible ray of light on what was stewing in men's crushed brains, but even that is a trifle. There was no beauty; no freedom -- we can see that from the architectural and household remains, and the poisonous sermons of the cramped divines. And inside that rusted iron strait-jacket lurked gibbering hideousness, perversion, and diabolism. Here, truly, was the apotheosis of the unnamable. We were not, as I have said, in any sense childishly superstitious, but scientific study and reflection had taught us that the known universe of three dimensions embraces the merest fraction of the whole cosmos of substance and energy. In this case an overwhelming preponderance of evidence from numerous authentic sources pointed to the tenacious existence of certain forces of great power and, so far as the human point of view is concerned, exceptional malignancy.

This was a very good read---well written, wide breadth of imagination, it held me gripped from beginning to end. It reminded me very much of one of my favourite yesteryear authors--Poul Anderson, who wrote several books from the same aspect, scientific magic, or magical science, I'm not sure which.
I would like to ask the author if he has ever read 'Operation Chaos'. Different storyline, but the concept is the same.

A short novel and short story bundled together, the one a sequel to the other. Not perhaps as dense as some of his other novels but surprising (as usual) and really good fun.