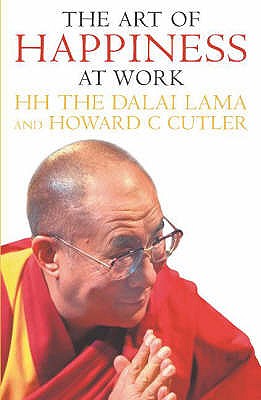 The Art of Happiness at Work

Of the many Dalai Lama titles on sale, THE ART OF HAPPINESS - written with western psychiatrist Howard Cutler - is by far the biggest bestseller of them all. A huge international success, it has sold over 2 million copies worldwide, with over 250,000 of these in the UK alone. Now, this inspirational new book brings the successful East-meets-West pairing together again to provide a practical application of Tibetan Buddhist spiritual values to the world of work. In today's stressful working climate, more and more people are ... Read More

Of the many Dalai Lama titles on sale, THE ART OF HAPPINESS - written with western psychiatrist Howard Cutler - is by far the biggest bestseller of them all. A huge international success, it has sold over 2 million copies worldwide, with over 250,000 of these in the UK alone. Now, this inspirational new book brings the successful East-meets-West pairing together again to provide a practical application of Tibetan Buddhist spiritual values to the world of work. In today's stressful working climate, more and more people are becoming disenchanted with the roles that they adopt at work, and how significantly their working persona differs from the person they are outside of the workplace. In this wise and practical book, the Dalai Lama shows us how to place our working lives into the context of our lives as a whole. Rather than striving to find a role which suits us, we should allow our work to arise naturally from who we are - and what is most important to us. From here we reach a pathway that can lead us to true life fulfilment and purpose. Read Less

All Editions of The Art of Happiness at Work

The Perfection of Wisdom

The Power of Buddhism

Destructive Emotions: A Scientific Dialogue with the Dalai Lama

How to See Yourself as You Really Are

How to Practice: The Way to a Meaningful Life

Ethics for the New Millennium

The Dalai Lama And The Workplace

In 1998, the Dalai Lama joined Dr. Howard C. Cutler, an American psychiatrist, in writing a book "The Art of Happiness" which became a best-seller. This book taught the importance of "looking within" and of controlling destructive emotions in living a good life and finding happiness.

Dr. Cutler and the Dalai Lama have again collaborated in this follow-up book which applies the insights of the initial volume to life situations which are, typically, the sources of great conflict. Several additional books, in addition to this book exploring the world of work, are underway. The book is based upon a series of conversations held between the Dalai Lama and Dr. Cutler over the course of several years. Dr. Cutler is responsible for the format and editing of the book. The final product was read and approved by the Dalai Lama's interpreter.

Early in the volume, the Dalai Lama reminds Dr. Cutler that the focus of the inquiry is "secular ethics" (p.7) One of the most valuable features of the book is that it shows how the Dalai Lama can use his spiritual tradition to articulate values that can be shared by many people, whether or not they are religious believers. Another feature of the book is the significance of the subject matter. Many people trust and listen to the Dalai Lama where they will be reluctant to accept possibly similar advice from experts, such as psychiatrists, or from teachers in Western religious traditions.

The book is deceptively simple in tone and teaching, but hard to realize. In a series of discussions Dr. Cutler explores with the Dalai Lama the reasons why many people tend to be bored or dissatisfied with their jobs. Dr. Cutler brings to bear many anecdotes from his work as a psychiatrist as well has his familiarity with much contemporary literature on job satisfaction. The Dalai Lama brings to bear his wisdom and insight. Time and again during the conversations, the Dalai Lama takes issue with Dr. Cutler, forcing him to redirect and rephrase his questions and assumptions, and to change the tenor of his approach to questions of happiness in the workplace. The Dalai Lama's approach is circumspect. He reiterates that the situation of every individual differs and that questions about work admit of no easy solution. In other words,it is not a case of "one size fits all."

With that said the issues and insights in the book are valuable. Chief among these for me are the Dalai Lama's comments on self-understanding. Much difficulty at work is caused by having an overly inflated or an overly deflated view of ourselves and our abilities. This causes discontent because it gives a picture of our abilities and our expectations of ourselves that are out of touch with reality.

Similarly, the Dalai's teachings in this book about patience, humility, self-control, and compassion for one's co-workers provide a great deal to think about in approaching the workplace. The Dalai Lama, in common with others who have thought about these matters, distinguishes between views of work as a "job", simply to support oneself, a "career", with the goal of advancement and growth, and a "calling" in which a person does what he or she finds important to be of service to others. People necessarily occupy different spaces on this continuum. For some people, the goal properly should be to learn the value of one's work and to move towards viewing it as a calling.
The book also teaches that work and money-making are not the sole source of happiness and urges the reader to develop other interests, particularly a sense of connection to others through family or through interests and activities outside the workplace.

There is also a tendency to criticize the book for its simplicity. I agree the teachings of the book are simple, but in practice they are difficult of realization. A virtue of the book is its very accessibility which makes it possible for the reader to try to use it for benefit in his or her own case.

Finally, it should be pointed out again that this book does not purport to be an introduction to Buddhism. It is a work of secular (or applied) ethics. There are ample books available, including many works of the Dalai Lama, for those who would like a specifically Buddhist study. One can learn from this book regardless of commitment or lack of commitment to any religion.

I thought this book helped me with questions that have bothered me for years. I also found that the book would probably be useful to many of my coworkers and, perhaps, useful as well, to management where I work.

This book will not solve any person's workplace issues, but it will encourage the reader to reconsider and to sharpen his or her focus to address these issues.

I found this book to be excellent value for money. Written in a lighthearted way, it was easy to read, with many thought-provoking moments for me. I had ordered the book just prior to being made redundant after 30 years with one employer, and after reading this, felt uplifted and inspired to move ahead with my life and plan my future career.