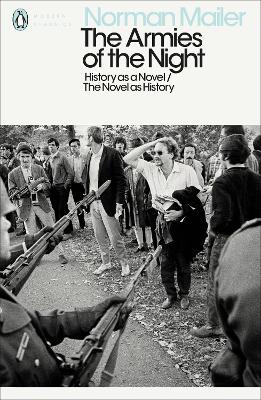 October 21, 1967, Washington, D.C. 20,000 to 200,000 protesters are marching to end the war in Vietnam, while helicopters hover overhead and federal marshals and soldiers with fixed bayonets await them on the Pentagon steps. Among the marchers is Norman Mailer. From his own singular participation in the day's events and his even more extraordinary perceptions comes a classic work that shatters the mould of traditional reportage. Intellectuals and hippies, clergymen and cops, poets and army MPs crowd the pages of a book in ... Read More

October 21, 1967, Washington, D.C. 20,000 to 200,000 protesters are marching to end the war in Vietnam, while helicopters hover overhead and federal marshals and soldiers with fixed bayonets await them on the Pentagon steps. Among the marchers is Norman Mailer. From his own singular participation in the day's events and his even more extraordinary perceptions comes a classic work that shatters the mould of traditional reportage. Intellectuals and hippies, clergymen and cops, poets and army MPs crowd the pages of a book in which facts are fused with techniques of fiction to create the nerve-end reality of experiential truth. The Armies of the Night uniquely and unforgettably captures the Sixties' tidal wave of love and rage at its crest and a towering genius at his peak. Read Less

The Naked and the Dead: 50th Anniversary Edition, with a New Introduction by the Author

The Naked and the Dead

In a career marked by bold, audacious gestures, Norman Mailer's 1968 Armies of the Night, his account of the anti-Vietnam War March on the Pentagon, may be the most audacious of them all; the author became famous early for his World War II novel, The Naked and the Dead.

The first section, "The Steps of the Pentagon," places the protagonist "Norman Mailer" at the book's center, and it's a stroke of genius, because how better to render an event's inner life than by imbuing it with a novelist's consciousness? Who is more knowable as a character than the author himself? By employing novelistic techniques in nonfiction, Mailer heralded what came to be known as the New Journalism.

The reader is rewarded with wonderful portraits of literary luminaries such as Robert Lowell and Dwight MacDonald, incisive, acidic comments about literary politicking, and a portrait of the novelist himself that isn't entirely flattering. There are scenes of boozing, existential speechifying, and violent impulses that are at once comic and appalling. In fact, Mailer refers to himself as an "ambiguous comic hero." The author also takes a confessional turn in anatomizing his relationships to wives past and present, even going so far as to admitting not to knowing his current spouse.

Mailer's prose can possess an overheated quality, especially when he pursues his favorite themes, but I think Armies remains one of the finest books about the Sixties. Consider, for example, this passage: "The hippies were there in great number, perambulating down the hill, many dressed lilke the legions of Sgt. Pepper's Band, some were gotten uup like Arab sheiks, or in Park Avenue doormen's greatcoats, others like Rogers and Clark of the West, Wyatt Earp, Kit Carson, Daniel Boone in bucksin, some had grown mustaches to look like Have Gun, Will Travel--Paladin's surrogate was here!--and wild Indians with feathers, a hippie gotten up like Batman, another like Claude Rains in The Invisible Man--his face wrapped in a turban of bandages and he wore a black satin top hat." It captures the utter diversity and time-enfolding strangeness of the counterculture as well as anything I've read.

Nor can I imagine any other American writer dramatizing an extraordinary scene in which, after his arrest for transgressing a police line at the Pentagon, Mailer has a psychic encounter with a Nazi in the back of a paddywagon. In addition, 40 years later, his critique of America's "corporation land"--its "static, screams of jet motors, the highway grid of the suburbs, smog, defoliation, pollution of streams, overfertilization of earth. . .and the radiation of two decades of near blind atom busting"--seems purely prescient.

If Book One is a tour de force, "The Battle of the Pentagon," or Book Two, is a somewhat more conventional recounting of the event. While this section isn't without wild Maileresque speculations, since it's a "collective history," the protagonist is largely absent, and that gives the section a more neutral, impersonal tone. What Mailer does evoke, however, are the New Left's radical even foolhardy tendencies, the factoids of both establishment and underground media, and the soldiers' savage beating of demonstrators, which seems now a harbinger of the awful violence of 1968. Also, Mailer intuited a fundamental antagonism between the middle-class protesters and the working-class troops as well as a contest of virility between them.

If Mailer's closing recalls Irish poet W.B. Yeats' "rough beast slouching toward Bethlehem" by imagining an America giving birth to a "fearsome totalitarianism" or "a babe of a new world," who can fault the author's apocalyptic vision at that signally tumultuous moment in our national life?

This super charged document from a protest at the Pentagon shows Mailer in both the first and third person. The best example of the "New Journalism" to come out from the Wolfe, Mailer, and Thompson.