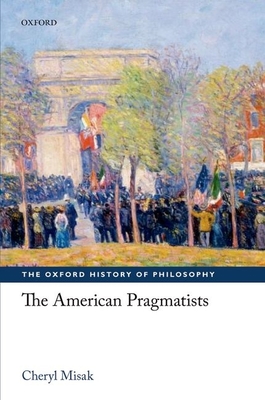 Cheryl Misak presents a history of the great American philosophical tradition of pragmatism, from its inception in the Metaphysical Club of the 1870s to the present day. She identifies two dominant lines of thought in the tradition: the first begins with Charles S. Peirce and Chauncey Wright and continues through to Lewis, Quine, and Sellars; the other begins with William James and continues through to Dewey and Rorty. This ambitious new account identifies the connections between traditional American pragmatism and ... Read More

Cheryl Misak presents a history of the great American philosophical tradition of pragmatism, from its inception in the Metaphysical Club of the 1870s to the present day. She identifies two dominant lines of thought in the tradition: the first begins with Charles S. Peirce and Chauncey Wright and continues through to Lewis, Quine, and Sellars; the other begins with William James and continues through to Dewey and Rorty. This ambitious new account identifies the connections between traditional American pragmatism and twentieth-century Anglo-American philosophy, and links pragmatism to major positions in the recent history of philosophy, such as logical empiricism. Misak argues that the most defensible version of pragmatism must be seen and recovered as an important part of the analytic tradition. Read Less

All Editions of The American Pragmatists

Cambridge Pragmatism: From Peirce and James to Ramsey and Wittgenstein

The Oxford Handbook of American Philosophy

The Practical Turn: Pragmatism in Britain in the Long Twentieth Century

The Last Pagans of Rome

Pragmatism And The Human Framework

Written for the Oxford History of Philosophy series, Cheryl Misak's "The American Pragmatists" (2013) offers a history of the distinctively American philosophical school of pragmatism from its earliest glimmerings in puritanism through current philosophical reflection and debate. Misak, Professor of Philosophy and Vice-President and Provost at the University of Toronto, has written extensively on pragmatism. In particular, Misak is a scholar and an admirer of the great American thinker Charles Sanders Peirce. Peirce's influence is everywhere in this book.

In a relatively brief book of 250 pages of text, Misak is erudite, thorough, and provocative. She does a great deal more than summarize the various views of philosophers loosely identified under the banner of pragmatism. The book is far more critical and evaluative than might be expected in even a philosophical history. Misak identifies similarities among the pragmatists and key differences. She leaves little doubt about how she develops her own philosophical positions as among the pragmatists. Put broadly, Misak finds that pragmatists share, in general, a commitment to naturalistic explanations (as opposed to supernaturalism), holism, a broad understanding of the nature of experience (rejecting sense-data theories, for example, of early empiricists) and a commitment to the human condition and human problem-solving as the basis for formulating, understanding and resolving philosophical questions.

Pragmatists differ in their understanding of truth, and different theories of truth become the driving theme of Misak's study. She claims that all the pragmatists offer a more deflationary understanding of truth than that of either idealism or realism, slippery though these terms are. But one school of pragmatists, exemplified by Chauncey Wright, Peirce and C.S. Lewis, reject an "ahistorical, transcendental, or metaphysical theory of truth" but nevertheless are "committed to doing justice to the objective dimension of human inquiry-- to the fact that those engaged in deliberation and investigation take themselves to be aiming at getting things right, avoiding mistakes, and improving their beliefs and theories."

The other major thread in pragmatism takes a far looser understanding of truth which, Misak states, holds that "there is no truth at which we might aim -- only agreement within a community or what works for an individual or what is found to solve a problem." Misak identifies the holders of this position as William James, F.S.C. Schiller, John Dewey, and, in contemporary philosophy, Richard Rorty. She develops and expands pragmatism's competing accounts of truth throughout her book. Her analysis is strongly with Peirce and his successors.

Misak has other important broad themes which deserve mention. She admires the history and research of Louis Menand's popular book, "The Metaphysical Club" while disagreeing with Menand's philosophical understanding of pragmatism and its importance. She rejects Menand's emphasis on the Civil War as a precipitating factor in pragmatic thought. More importantly, Misak finds Menand's account tilted towards a view of pragmatism as a skepticism or relativism more in accordance with the teachings of James and Dewey than with Peirce. Misak is strongly commited to a Peircean understanding of pragmatism.

A more important, and more technical, theme of the book is the relationship between pragmatism and what has loosely been described as analytic philosophy. Early analytic philosophers, such as Russell and Moore, criticized pragmatism severely for the formulations about truth in James and Dewey. According to Misak, prior historians believe that analytic philosophy displaced pragmatism as the dominant school of American philosophy at about the middle of the 20th Century. Misak rejects this philosophical understanding of philosophy's history. She argues instead that the early analytic philosophers were strongly influenced by pragmatism and that pragmatism's influence increased over the years so that the two schools almost melded together. She sees the height of pragmatism's influence in W.V.O Quine's famous paper "two dogmas of empiricism." She sees further pragmatic influence in the work of an analytic philosopher she greatly admires, Donald Davidson, in a paper called "The Very Idea of a Conceptual Scheme." Misak sees a basic continuity between analytic philosophy and pragmatism. Misak's claims are well-argued and valuable. I think an almost equally strong case, however, could be drawn for the relationship between pragmatism and idealism, which coalesce at many points. Misak offers a short, insightful discussion of Josiah Royce, an idealist thinker strongly influenced both by Peirce and by William James. With the interest in religion and values of many pragmatist philosophers, which Misak recognizes at length, pragmatism could be linked as readily with idealism as with analytic thought. Misak's own views lean more towards science and towards more hard-headed analysis.

The book proceeds as a history interlaced with the types of philosophical analyses and argumentations indicated above. Part I of the book "The Founders of Pragmatism" begins with a brief discussion of early precursors of pragmatism followed by densely written chapters on Chauncey Wright, Peirce, and James, with shorter treatments of Oliver Wendell Holmes, Royce, and Schiller.

Part II of the book "The Middle Period" discusses early critiques of pragmatism, but it focuses on the difficult, confusing, but highly influential philosophy of Dewey. There are short treatments as well of George Herbert Mead, Dewey's colleague, and of George Santayana.

In Part III, "The Path to the Twenty-First Century", Misak explores at length the interplay between analytic philosophy, beginning with the early logical positivists, and pragmatism. Again, her goal is to bring what are commonly thought of as two competing ways of philosophizing together. Misak offers a long, admiring discussion of C.I. Lewis, a philosopher who is not studied as frequently as he might be, followed by a lengthy treatment of pragmatic aspects of the thought of Quine. There are discussions of Nelson Goodman Morton White, and a too brief treatment of the influential Wilfred Sellars. This brings the story to the final decades of the 20th Century. Richard Rorty receives an unsympathetic reading from Misak while Hilary Putnam, Rorty's opponent, receives as might be expected a more sympathetic discussion. The book concludes with a valuable recapitulation of its main themes and a prognosis as philosophizing and pragmatism continues into the 21st Century.

Misak has written a wonderfully well-informed and philosophically challenging book about American pragmatism. It is probably not for beginners, but the audience for the book should be broader than specialists. There are frequent technical discussions of for example the claimed differences between analytic and synthetic statements and the Tarski (disquotational) theory of truth that reduces the concept of truth to the form "snow is white" is true if and only if snow is white that require some background in philosophical debate. Overall, the book can be read with advantage by a persistent non-specialist.

Readers seriously interested in American philosophy and, of course, in pragmatism will benefit greatly from Misak's book.