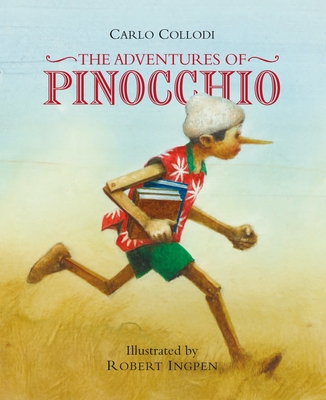 The Adventures of Pinocchio

The tale of how the old woodcarver Geppetto made a puppet boy from an unusual piece of wood, who could talk, dance and turn somersaults, has been a much-loved story since it was first written more than 130 years ago. Pinocchio ignores the advice of his kindly father and sets off into the world for some extraordinary adventures... Read More

The tale of how the old woodcarver Geppetto made a puppet boy from an unusual piece of wood, who could talk, dance and turn somersaults, has been a much-loved story since it was first written more than 130 years ago. Pinocchio ignores the advice of his kindly father and sets off into the world for some extraordinary adventures... Read Less

All Editions of The Adventures of Pinocchio

The Wonderful Wizard of Oz

"That Puppet is a disobedient son who is breaking his father's heart!"

This was nothing like the Pinocchio I was familiar with. Granted, I only watched the Disney (yeah, I know Disney's adaptations don't really stick close to the original fairy tale) movie probably one time in my life, so I didn't remember much of Pinocchio's story, to begin with. But, I wasn't expecting such a story as this.

Pinocchio is probably one of the most unlikeable main characters I've come across in a book thus far, and was one of the key points I hadn't remembered. This infuriating little puppet was incredibly disobedient and selfish. While I understand why he was drafted to be so, I couldn't help but bid against him and his endeavors. Chance after chance, he just...does whatever he wants, and it was downright irritating! Not to mention, there are a few elements to the plot which are utterly terrifying for children to read! At one point, Pinocchio is hung, he bites off the paw of a cat, and so on and so forth.

Pinocchio definitely goes through a lot of trials, but a majority of them are of his own making. Through many (MANY) wrong choices, he eventually realizes that if he makes selfless decisions, life is much easier and truly enjoyable.

"When bad boys become good and kind, they have the power of making their homes bright and new with happiness."

Overall, I think the summation of this book is good, it was simply an unpleasant journey to get to the end.

A Foolish Puppet Becomes a Boy

The Adventures of Pinocchio is a classic story about what happens to a foolish puppet who does not listen to the wise advice of others and who disobeys his unselfish father Geppetto. From the moment he comes to life Pinocchio causes trouble. He chooses not to listen to the Talking Cricket, a black-bird, a Parrot, and a Fairy with blue hair. Pinocchio encounters a (supposedly) lame Fox and a (supposedly) blind Cat who dupe him into putting money in the (alleged) Field of Riches. After skipping school Pinocchio narrowly escapes a vicious police dog and a hungry green fisherman. Pinocchio becomes a donkey (Collodi makes good use of symbolism here!) as a result of his visit to Funville. The donkey becomes lame after tripping in a circus act. A man comes along to purchase the lame donkey so the animal's skin can be used to make a drum. After being thrown into the sea with a stone around his neck the donkey changes back into a puppet. Pinocchio is then swallowed by a shark and discovers that his father has suffered the same fate. Father and son both escape and Pinocchio becomes a real boy.

The moral of this story is fairly clear: Our bad decisions and foolish choices have negative consequences. Though this story is targeted to children (boys in particular) the lessons presented in this book can apply to adults as well. The version of this story in this review is an adaption and is designed for younger readers. However, adults will enjoy this wonderful story about a classic literary character and the error of his ways. The book concludes with a brief biographical sketch of Carlo Collodi.