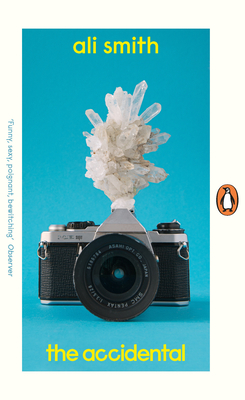 From the Man Booker Prize-shortlisted, Baileys Women's Prize-winning author of How to be both and the critically acclaimed Seasonal quartet 'Brilliant and engaging, frequently hilarious. . . Smith makes one look at the world afresh' Sunday Telegraph 'A beguiling page-turner... To read The Accidental is to be excited from first to last' Independent 'Joyous' The Times The Accidental pans in on the Norfolk holiday home of the Smart family one hot summer. There a beguiling stranger called Amber appears at the door bearing all ... Read More

From the Man Booker Prize-shortlisted, Baileys Women's Prize-winning author of How to be both and the critically acclaimed Seasonal quartet 'Brilliant and engaging, frequently hilarious. . . Smith makes one look at the world afresh' Sunday Telegraph 'A beguiling page-turner... To read The Accidental is to be excited from first to last' Independent 'Joyous' The Times The Accidental pans in on the Norfolk holiday home of the Smart family one hot summer. There a beguiling stranger called Amber appears at the door bearing all sorts of unexpected gifts, trampling over family boundaries and sending each of the Smarts scurrying from the dark into the light. A novel about the ways that seemingly chance encounters irrevocably transform our understanding of ourselves, The Accidental explores the nature of truth, the role of fate and the power of storytelling. Read Less

All Editions of The Accidental

Is ?The Accidental? the next ?Beloved??

I?ve had The Accidental sitting on my desk for the past couple months. I put it there after finishing it, with the intention of reviewing Ali Smith?s remarkable novel. But this tale of a family on holiday in the English countryside is so distinct, enigmatic, and powerful that it has kept me guessing and wondering since its end?the way only certain books resonate within you and, unlike most novels on bookstore shelves, ask to be remembered.

The Accidental centers around a mysterious conceit: A woman unknown to an upper-middle-class family arrives at their vacation home one day; she exerts an unseen-and-inexplicable influence on each family member; she stays with them for days and leaves them all changed in unbelievable ways. ?Unbelievable? is a good word for describing The Accidental. Smith?s writing is deep, clean, and beautiful. The story?s impact is simple yet lasting. But the central pillar of the novel?that a stranger would be welcomed as a largely unquestioned and ongoing guest in a family?s home?is unbelievable. The woman isn?t magic. She isn?t an expert at mind control. She?s merely a displaced woman named Amber. Or is she? In Smith?s hands, the implausibility surrounding Amber?s new place in this fictional household actually becomes a thematic mirror in the final quarter of the novel?with subtle, satisfying brilliance.

Amber?s arrival?pregnant with so many consequences?reminds me of the arrival of the ghostly, strange title character in Toni Morrison?s stunning classic, Beloved (perhaps the best book of the last 25 years). The comparisons don?t end there. Like Beloved, Amber establishes and maintains a spooky hold over the inhabitants of the story. Like Morrison?s, Smith?s prose is vibrant and nearly perfect, imbuing her characters with so much depth and life. The character of Beloved, however, is more otherworldly than Amber, and Morrison?s novel is rooted in the horrors of slavery rather than the dysfunctions of a particular well-off English family.

Beloved makes a weightier, more refined read?and is certainly a singular literary experience. However, The Accidental is still worthy of the comparison. It begs to be savored and remembered, and time will show us where it stands among the giants of contemporary literature.

Let me make two confessions before I begin: 1) I'm partial to books with multiple narrators or points of view; 2) I generally don't care for adolescent narrators. So naturally, the structure of The Accidental immediately appealed to me, but I was also immediately put off by the first sizable chapter, narrated by 12-year old Astrid Smart. I stuck with it and ended up very happy that I did. Many reviewers have complained that Amber, a central character whose presence in the Smarts' vacation home, remains a cypher. But that's exactly what I believe Smith intended. The novel isn't about Amber, except as a catalyst for change within the family. When she arrives, Eve, Michael, Magnus, and Astrid are each miserable in his or her own way, and they are all miserable as a family. The changes Amber provokes seem to leave everyone happier--but are they? When I got to the end of the book, I felt totally confused. What had happened? Well, I don't want to give anything away, but I went back and reread the last 80 pages or so, and the effort was totally worth it. I loved this novel, its freshness and authenticity, and I'll be looking for more by Ali Smith.