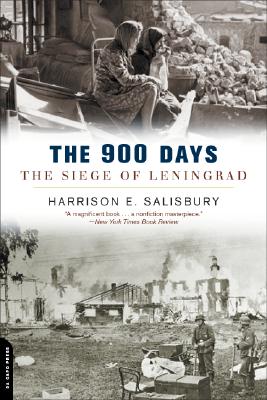 The 900 Days: The Siege of Leningrad

"The Nazi siege of Leningrad from 1941 to 1943, during which time the city was cut off from the rest of the world, was one of the most gruesome episodes of World War II. In scale, the tragedy of Lening" Read More

"The Nazi siege of Leningrad from 1941 to 1943, during which time the city was cut off from the rest of the world, was one of the most gruesome episodes of World War II. In scale, the tragedy of Lening" Read Less

All Editions of The 900 Days: The Siege of Leningrad

Over China: A Celestial View of the Middle Kingdom

Russia on the Way

Cold War, Cold Peace: The United States and Russia Since 1945

The Coming Decline of the Chinese Empire

This book was first published in 1969 at a time when the Eastern Front in World War 2 got very little coverage in the UK. I first read it in about 1975 and it had a great impact on me. The scale and duration of the suffering and the number of deaths involved in the Siege of Leningrad are truly horrifying.

This book gives a very good account of the German invasion of the Soviet Union. Its core, for me, is the descriptions of the hardships experienced by both the civilian and the military populations of Leningrad. It is a book everyone should read, I think.

Inevitably, I suppose, it is now showing its age a bit. There was a brief, now largely ended, opening up of Soviet archives after Glasnost and the fall of the Iron Curtain. More recent accounts of this siege, like Michael Jones' Siege of Leningrad, have had access to more documents and present a clearer account of some of the military incompetence of the Red Army in the first months of the war. They also give a clearer picture of the corruption and special privileges available to the select few in senior Communist Party positions throughout the siege.

But for the detail of life for the civilian population of Leningrad, particularly during the starvation winter of 1941-2, when probably well over a million people died of starvation, Salisbury's account is very hard to beat.

This is a very harrowing book but one that I thoroughly recommend. No-one who reads it will ever forget it, I believe. I have given it 4 stars rather than 5 because of the availability of later information and, occasionally, some repetitiveness in the text. But this wasn't an easy decision and when I first read it, I would certainly have classed it as excellent. It is a true classic, I believe.

This is a thorough and fast moving story of the seige of Leningrad (St. Petersburg) Russia by the Nazis. If you don't let youself get too tied up with the names of military units and individual players you will get a tremendous feel for the times.

This documents in frightening detail the horrors of the siege.

Very informative book concerning the siege of Leningrad (St. Petersburg) Russia during World War II. Just the right amount of troop movement versus civilian accounts. Makes you appreciate the life we have today. Book is very well written and more than adequately referenced.