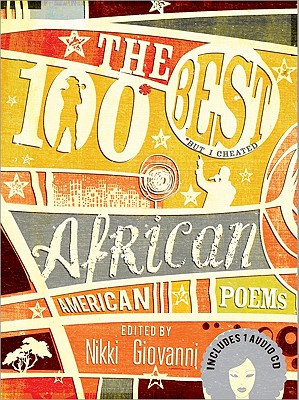 Award-winning poet and writer Giovanni takes on the difficult task of selecting the 100 best African-American works from classic and contemporary poets. Read More

Award-winning poet and writer Giovanni takes on the difficult task of selecting the 100 best African-American works from classic and contemporary poets. Read Less

Hip Hop Speaks to Children: A Celebration of Poetry with a Beat

Toni Morrison: The Last Interview: And Other Conversations

Vinegar and Char: Verse from the Southern Foodways Alliance

Black Profiles in Courage: A Legacy of African-American Achievement

African Americans have made large contributions to the literature of the United States especially in poetry. The award-winning poet Nikki Giovanni has selected for this volume 100 (or so) of the best poems written by African Americans. The book is accompanied by a CD of readings of 36 of the poems.

As Giovanni recognizes, it isn't possible for anyone to pick out the 100 "best" of a large, complex genre. Few informed readers would agree on the choice of 100 "best" poems. Furthermore, any anthology of poetry will involve considerations of subjectivity -- personal preference -- and inclusiveness -- offering works from a variety of authors, styles, and time periods -- in making the selections. So it is with this anthology. Giovanni's book includes both personal favorites and attempts to capture part of the large range of African American poetry. Her selection is broad and fascinating. It includes many outstanding poems together with some that did not work for me and that may not appeal to every reader.

The poems are not organized in the collection on the basis of chronology or poet. They are presented in a collage-like fashion; although the opening two poems, "The Aunt" by Mari Evans and "For my People" by Margaret Walker set the tone for the volume. Evans' poem is about family and individuality while Walker's poem is more communal and political. The earliest poet included is Paul Laurence Dunbar. He is represented by two works, including a poem in dialect, "A Negro Love Song" and his most famous poem, "We Wear the Mask." Langston Hughes has the largest number of individual poems in the collection with at least eight works, including "The Negro Speaks of Rivers" and Gwendolyn Brooks is also well represented with seven poems including "We Real Cool". Other famous poets whose works are represented include Sterling Brown, Countee Cullen, Robert Hayden, James Weldon Johnson (including "Lift every Voice and Sing"),Sterling Brown, Amiri Bakara (LeRoi Jones), and more. There are six poems included by Giovanni herself, including the concluding poem of the volume "Ego Tripping". Richard Wright, better known as a novelist, is represented by an early sharply-written poem, "Between the World and Me". The Harlem Renaissance writer Waring Cuney is represented by his wonderful poem, long one of my favorites, "No Images."

There are many poems of varying themes by African American women. I enjoyed Georgia Douglas Johnson's short poems, "Trifle" and "The Heart of a Woman", Naomi Madgett's personal, "Woman with Flower" , Gloria Oden's "The Carousel", Lucille Clifton's "Homage to my Hips" and June Jordan's "If you saw a Negro Lady." None of these poems were earlier familiar to me. I was especially pleased to get to know Gwendolyn Brooks' extended poem, "A Bronzeville Mother Loiters in Mississippi, Meanwhile, A Mississippi Mother Burns Bacon", a ballad about the murder of Emmett Till.

Poetry should be heard and read aloud to be appreciated, and the CD accompanying this book adds a great deal. The poems are well-selected and are read with drama, passion, and spontaneity. Some of the readings are drawn from historical recordings and feature Gwendolyn Brooks and Robert Hayden reading their own poems. Giovanni and Sonia Sanchez, and Marilyn Nelson also read their own works. Most of the readings were done at Virginia Tech under Giovanni's supervision by an enthusiastic group readers including Ruby Dee and Virginia Tech's president, Dr. Charles Steger. The readings are done with spirit and offer an excellent gateway to the poems and to the art of reading aloud.

This book is a fine anthology of African American poetry including both familiar and unfamiliar selections in a variety of styles and voices. Readers who love poetry or African American literature will enjoy this book and CD.