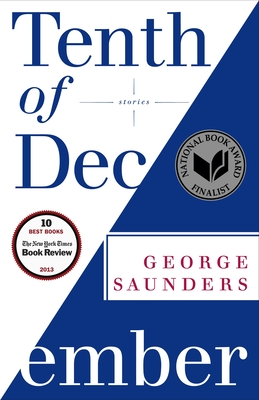 A collection of stories which includes "Home," a wryly whimsical account of a soldier's return from war; "Victory lap," a tale about an inventive abduction attempt, and the title story, in which a suicidal cancer patient saves the life of a young misfit. Read More

A collection of stories which includes "Home," a wryly whimsical account of a soldier's return from war; "Victory lap," a tale about an inventive abduction attempt, and the title story, in which a suicidal cancer patient saves the life of a young misfit. Read Less

All Editions of Tenth of December: Stories

Lincoln in the Bardo

Congratulations, by the Way: Some Thoughts on Kindness

The Brief and Frightening Reign of Phil

The Very Persistent Gappers of Frip

Lincoln in the Bardo

I bought this book based on a George Saunders interview on the Colbert show and the high praise lavished on the author in the advertisements. Besides, I'm a softie for the short story format. But I have to say these stories did not resonate with me at all. I just didn't get it. Maybe it's because the style of writing is new age 21st century, or whatever. I'm 70 and grew up on a different style. I do give credit to the author for breaking new stylistic ground and I assume it has wide appeal to the more sophisticated audience of which I am apparently not a part.

I picked this book up because I?d read four or five glowing reviews, one of which saying it was the ?best book you?ll read this year.?

It was, in fact, the WORST book I?ve read in a long, long while.

The reviews always seemed to use the word ?hilarious,? which just stumped me. What part was hilarious? The poor woman who murders animals because she thinks her husband probably wants her to? The retarded child they keep chained in their backyard? The Iraq vet who?s angry and confused?

Yeah, it was a hilarious read (please note, SARCASM).

It came off like that English teacher everyone had that always talked about writing, but cannot do it himself (or self-published and ended up with 400 copies of his poetry chapbook in his trunk).

Filled with unlikable characters, boring plots, and muddled storytelling, I hated it. This was the first book in a long time that I read in one day; not because I couldn?t put it down, but because I wanted to just get through it and put it behind me.