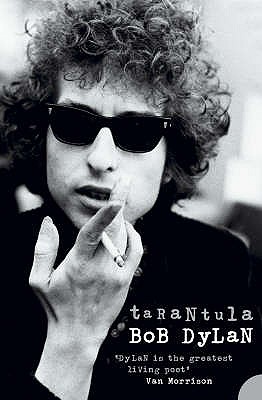 Written in 1966, 'Tarantula' is a collection of poems and prose that evokes the turbulence of the times in which it was written, and gives a unique insight into Dylan's creative evolution. 'The good samaritan coming in with the words "round & round we go" tattoed on his cheek / he tells the senator to stop insulting the lawyer.' 'Tarantula' captures Bob Dylan's preoccupations at a crucial juncture in his artistic development, showcasing the antic imagination of a folk poet laureate who was able to ... Read More

Written in 1966, 'Tarantula' is a collection of poems and prose that evokes the turbulence of the times in which it was written, and gives a unique insight into Dylan's creative evolution. 'The good samaritan coming in with the words "round & round we go" tattoed on his cheek / he tells the senator to stop insulting the lawyer.' 'Tarantula' captures Bob Dylan's preoccupations at a crucial juncture in his artistic development, showcasing the antic imagination of a folk poet laureate who was able to combine the humanity and compassion of his country roots with the playful surrealism of modern art. Angry, funny and strange, the poems and prose in this collection reflect the concerns we find in Dylan's most seminal music: a sense of protest, a verbal playfulness and spontaneity, and a belief in the artistic legitimacy of chronicling everyday life and eccentricity on the street. 'Tarantula' never made its publication date in Autumn 1966. To the delays added by Dylan's constant revisions was added the greater complication of his motorcyle accident - which left him with still undisclosed injuries and kept the book from publication until 1971. In the interim, it became a cult phenomenon, with 'bookleg' editions photocopied from reviewer proofs circulating throughout the musical and literary demi-mondes. Reissued to coincide with the paperback release of 'Chronicles Volume 1', 'Tarantula' will finally find the wider audience it deserves. Read Less

All Editions of Tarantula

Bob Dylan: Behind the Shades Revisited

No Direction Home: The Life and Music of Bob Dylan

Flashes of Brilliance Buried in Keyed Up Chaos.

Upon first glancing at what?s inside this ?experimental? book, it?s a little scary to imagine the 1965 Dylan: chain-smoking, consuming tremendous amounts of amphetamines, all these thoughts bouncing frenetically around inside his head on sleepless hotel nights. Tarantula feels like this state of mind. Lucid and confused, clipped and rambling, beautiful and ugly. Very keyed up, slightly pretentious, with a healthy dose of paranoia.

Fielding questions about the book in 1966, Dylan remarked that it wasn?t about anything, that it was just a bunch of words, that it was ?rhythmic.? And of course, he?s right. Tarantula lacks a decoder to make sense of the run on sentences, haphazard punctuation, and outrageous characters that populate its pages. A lot of it reads like free form association, and some is more enjoyable read aloud, if only for the sounds the words make. Dylan is a lover of the English language, and Tarantula, for its convolution, is not an exception. Rhythmic it is. Tracing the liner notes of Bringing It All Back Home and Highway 61 Revisited, it isn?t hard to see our hero heading in this direction. It is the overflow seating for everything that didn?t make it into his astounding musical compositions.

You will hear the book subtitled with the word ?Poems? in some editions, which may or may not be a disservice to the work. The primary format of the book is loose, unformatted prose-style writing, often with a poem-like letter at the end from one of Dylan?s many characters to another. Some pieces are so tangential it?s almost impossible to follow the progression of Dylan?s ideas: ?aretha/ crystal jukebox queen of hymn & him diffused in drunk transfusion wound would heed sweet soundwave crippled & cry salute to oh great particular el dorado?? Others tell narratives (albeit bizarre and fantastical) that are much more reader-friendly. ?Subterranean Homesick Blues & the Blond Waltz? is a particularly coherent piece that says a remarkable amount about living. ?The Vandals Took the Handles (An Opera)? gives us possibly the most provocative and telling answer to the elusive ?Who is Bob Dylan? question. Overall, there are some incredible passages, but there is no great theme or message. Each piece is independent of the others. It is best digested in small chunks.

Given Dylan?s drug habit at the time, it is easy to write off Tarantula as nothing but an amphetamine-marijuana-LSD travelogue of no creative foresight or artistic merit. However, Dylan spent a significant amount of time with the book (which was, in its own right, a commissioned work), bringing the proofs on his famed 1966 tour, and after his motorcycle crash that summer, holding off publication until 1971. Clearly this was how he intended it.

The result is the work of a genius, but not quite a work of genius. Nor, however, is it all inaccessible, muddled nonsense. Dylan is a fantastic writer, but it?s just that some of his talent gets a little buried in Tarantula?s murkiness. The golden pieces are brimming with positively Dylan-esque sarcasm, wit, and absurdities. Piano repairmen who carry coat hangers. False eyelashes in people?s car transmission. The flashes of brilliance speak to the incredible ability and chaotic mind of an immensely talented man who didn?t ? couldn?t ? explain his work.

This book is great for serious Dylan fans, though they may not even like it. In other words, it is likely to be enjoyed only by those with an interest in the author. Pull it off the shelf when the mood strikes. Return to it two months later and find something entirely new. Perhaps what is most remarkable about Tarantula is that is does not feel in any way dated, and it will change with you. A willing and open mind can glean a lot from its frenetic, surreal pages.