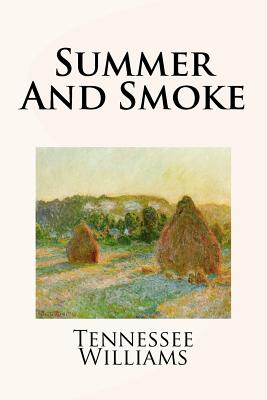 Tennessee Williams' sensuous portrait of sexual repression is as sultry as the sweltering heat of its Mississippi setting. Alma Winemiller, the sheltered daughter of a minister, secretly harbors a lifelong love for the boy next door, Dr. John Buchanan. Alma seeks a spiritual love with just one man, but the rakish John is focused solely on sexual conquest. Their intense relationship degenerates into a battle for his body and her soul. Read More

Tennessee Williams' sensuous portrait of sexual repression is as sultry as the sweltering heat of its Mississippi setting. Alma Winemiller, the sheltered daughter of a minister, secretly harbors a lifelong love for the boy next door, Dr. John Buchanan. Alma seeks a spiritual love with just one man, but the rakish John is focused solely on sexual conquest. Their intense relationship degenerates into a battle for his body and her soul. Read Less

All Editions of Summer and Smoke

Death of a Salesman

Night of the Iguana

I have seen and read Tennessee Williams' play "Summer and Smoke" several times and the work has stayed with me. I have reread the play and seen the movie for the first time after reading John Lahr's recent biography, "Tennessee Williams: Mad Pilgrimage of the Flesh." (2014)

Williams' play is set in a fictitious small town, Glorious Hill, Mississippi, in the years leading up to WW I. The play tells the story of a failed, unconsummated relationship between Alma Winemiller and John Buchanan. Alma is a singer and the daughter of an aging minister and his deeply emotionally troubled wife. Alma has spent her life devoted to her father, the church, and to performing the parsonage duties that ordinarily would have been the responsibility of the wife. She is sexually repressed, prim, and spinster-like even for a young woman of 25. She suffers from hysteria and insomnia and is increasingly dependent on pills.

Alma has been in love since childhood with her neighbor, John Buchanan who has been raised by his physician father alone after his mother died. John follows his father to become a doctor, but as a young man returning to town he lives a licentious life, full of gambling, drink, and sex with the loose women of the town. In an important scene of the play, John tries to persuade Alma to accompany him to a cheap room at the local casino. She indignantly refuses.

The critical scene of the play occurs when a drunken, dissipated John shows Alma a chart of the human anatomy. (This scene gave the play its original title, "Chart of Anatomy".) John shows Alma the brain the belly, and the lower part: "this part down here is the sex which is hungry for love because it is sometimes lonesome." John says he has fed his desires while Alma has refused to recognize hers. Alma replies that there is something "not shown on the anatomy chart" -- the soul which is "there just the same, yes there". And "it's that that I loved you with -- that." The play proceeds with a role reversal. Alma comes to terms with her body and offers herself to John. John, however, has settled down and is to be married to a younger, more conventional woman. At the end of the play, a saddened but tragically more self-aware Alma offers herself for casual encounters, at best, to travelling salesman and strangers.

The play shows a dualism in the conflict between body and soul or flesh and spirit. The play aims to unite the two as part of a vibrant, full life, something neither of the primary characters are able to achieve. Some readers have criticized the play for talking about the conflict between flesh and spirit as opposed to dramatizing the conflict in action. Williams himself was conflicted about the play and said differing things about it. At one point he said of Alma, "she is my favorite because I came out so late and so did Alma, and she had the greatest struggle." I think Williams was referring to the difficulties both he and Alma faced in recognizing and acting upon their own strong but different sexualities. Williams later became critical of the melodramatic, metaphysical character of "Summer and Smoke". In the mid-1960s, he wrote the work into an essentially different play, "The Eccentricities of a Nightingale." This play focuses much more on Alma than on Alma and John and it markedly softens the dualism of its predecessor. Williams preferred "The Eccentricities of a Nightingale" to its predecessor. I disagree. With its lyricism, passion, and depth, I still love "Summer and Smoke".

Margo Jones directed "Summer and Smoke" in its 1948 Broadway premier. The play competed with Williams' own, " A Streetcar Named Desire" and was not favorably received. In 1952, the play was revived off-Broadway in a production featuring Geraldine Page and directed by Jose Quintero. This production was much more successful. The performance established Geraldine Page's reputation, and she subsequently starred in the 1961 movie version of "Summer and Smoke".

I have enjoyed reading and thinking about this play again and writing about it here. In addition to this edition, the play is available in the first of two Library of America volumes devoted to the plays of Tennessee Williams.