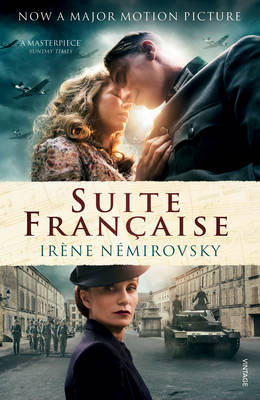 In 1941, Irene Nemirovsky sat down to write a book that would convey the magnitude of what she was living through, not in terms of battles and politicians, but by evoking the domestic lives and personal trials of the ordinary citizens of France. She did not live to see her ambition fulfilled, or to know that sixty-five years later, "Suite Francaise" would be published for the first time, and hailed as a masterpiece. Set during a year that begins with France's fall to the Nazis in June 1940 and ends with Germany turning its ... Read More

In 1941, Irene Nemirovsky sat down to write a book that would convey the magnitude of what she was living through, not in terms of battles and politicians, but by evoking the domestic lives and personal trials of the ordinary citizens of France. She did not live to see her ambition fulfilled, or to know that sixty-five years later, "Suite Francaise" would be published for the first time, and hailed as a masterpiece. Set during a year that begins with France's fall to the Nazis in June 1940 and ends with Germany turning its attention to Russia, "Suite Francaise" falls into two parts. The first is a brilliant depiction of a group of Parisians as they flee the Nazi invasion and make their way through the chaos of France; the second follows the inhabitants of a small rural community under occupation who find themselves thrown together in ways they never expected. Nemirovsky's brilliance as a writer lay in her portrayal of people, and this is a novel that teems with wonderful characters, each more vivid than the next. Haughty aristocrats, bourgeois bankers and snobbish aesthetes rub shoulders with uncouth workers and bolshy farmers. Women variously resist or succumb to the charms of German soldiers. However, amidst the mess of defeat, and all the hypocrisy and compromise, there is hope. True nobility and love exist, but often in surprising places. Irene Nemirovsky conceived of "Suite Francaise" as a four- or five-part novel. It was to be a symphony - her "War and Peace". Although, only two sections were finished before her tragic death, they form a book that is beautifully complete in itself, and awe-inspiring in its understanding of humanity. Read Less

All Editions of Suite Francaise

Fire in the Blood

Dimanche and Other Stories

David Golder, the Ball, Snow in Autumn, the Courilof Affair

An exquisite book. Even more remarkable when considering the conditions it was written under and the long journey from handwritten manuscript to publication decades later.

Nemirovsky lays out an incredibly detailed description of the occupation of France and the reactions of the French to the Germans and then glides into an intimate story between a married french woman and a German officer.

Her perceptive voice was lost to the world when she was killed by the Nazis. Incredible that her daughters were able to save this manuscript when they were running from the Nazis.

Very good read. Highlights the plight of everyday people during occupation and contrasts it with the upper class. Must read Author's notes at end of book-gives added dimension to the manuscript.

A brilliant, if sad tale of war and horror

I just finished reading Suite Francaise, a book that took me over a month to finish, mostly because it took a very long time for me to actually get into it. I persevered, because what I?d read was good if not captivating ? and because the book received the best overall reviews of any book in 2006. That?s pretty compelling, and I?m glad I did bear down, as Suite Francaise was absolutely a very enjoyable book.

I?m not sure it?s the most brilliant story I?ve read per se, but what makes the book so unique and tragic is that it?s essentially a first draft. Irene Nemirovsky, a Jewish Russian émigré living in France, wrote this during WWII, about the German occupation of France that was going on at the same time she wrote her draft. It remained a draft because Nemirovsky was taken to Auschwitz, where she died, her husband befalling the same fate just a short while later

The book is actually two short books of a planned total of five, the latter three which never got drafted. The first, Storm in June, follows several Parisian families and characters, of varying class and personalities, as they scramble to avoid the invading German soldiers. It?s interesting, and occasionally surprisingly funny amidst the pending -- but somehow distant -- horror. Nemirovsky?s writing is crisp and the somewhat dated tone of the language (which, of course, is also translated here by Sandra Smith) still works just fine. Storm in June does feel like it would really have benefited from some editing, and perhaps I?d have not finished seven or eight back issues of the New Yorker while finishing the rather sparse 190 pages of the story. (Or maybe it?s just me.)

The second book, Dolce, is more powerful, as the Germans have not only arrived but have occupied the area, moving into locals homes, eating their food and living off their land. Here, the characters are better developed and the frustration, shame and despair of being an occupied country feels palpable. The stories are more personal, and we begin to see connections between these characters and some of those from Storm in June, notably the Michauds, a middle-class family that were perhaps the sole truly likeable characters in the first book. We focus on several locals in a single village that has been occupied by the Germans. Some are resolute in their hatred of all things German; others are scorned for being too welcome, too accepting of the occupation.

It is, however, only after reading Nemirovsky?s notes on her plans for the rest of the novel, and most tragically, her and her husband Michel Epstein?s correspondence that begin tragically fall off as each of them are arrested, en route to Auschwitz where both perished.

And it?s the fact that she wrote these stories almost literally as they were happening that is perhaps the most impressive thing about Suite Francaise. She realized and began to develop characters experiencing things she was only beginning to see transpire; in a sense, she correctly saw the outcomes of many things yet to occur in real life. Curiously missing from most of this, are any Jewish characters who befell the things Nemirovsky did herself ? though her notes suggest that this topic (or something like it) would be covered, her letters show that she was sure her time was short, so it?s not like she didn?t understand that risk or horror. It?s an odd omission in light of things.

On their own, the two books are enjoyable and often quite good, but it?s the entire experience of what?s in Suite Francaise that makes it fully worth it. Her notes show a vision that would make both a great story but stay within the context of the war that was still unfolding. The sheer effort of what she was trying to do ? and succeeding in doing so ? is actually somewhat heroic, especially given her personal risk. And her letters, and her husband?s desperate attempts to find her, bring the real-life horror into what had remained fiction until then. The grim capstone here makes everything that more powerful.

As a novel, it does read like a phenomenal first draft, but one that still is not as polished as it should be. And the overall book experience certainly does get points from me because of the circumstances in which it was written and saved. (It was only discovered recently, written in tiny script in an notebook that her daughters had kept without realizing what they had.)

I loved this book!

The book is really two novels combined into one story: Storm in June & Dolce. It was written during World War II when Nemorovsky was in hiding from the Germans in the French countryside. She died shortly after in the concentration camp Auschwitz. Her children found her manuscript and had it published some 64 years later. She had intended to write three volumes as an answer to World War II's War and Peace. Her daughter was afraid for years to open what she thought were her mother's journals, which were really the manuscript for Suite Francaise. It wasn't until 64 years after her death did her daughter transcribe the novel and submit it for publication. The novel, which is in many ways a draft, is remarkable. Sandra Smith, who translates the French version into English remarked on how well written it was and assured the readers that she didn't add or subtract anything from the novel aside from one name confusion issue. As it is written as history is being made the descriptions seem more fresh and alive for the reader. The first book: Storm in June, beautifully describes a panicked country. People fled their homes from the oncoming German forces that were not only invading but burning and pillaging. She follows a varied group of families from the very rich and eccentric to the working class and poor and their exudus out of Paris. The tragedy that befell them equalized them. The second book: Dolce, looks at a small town a year after the exodus. It especially highlights the illicit friendship between a young French woman and a German soldier.