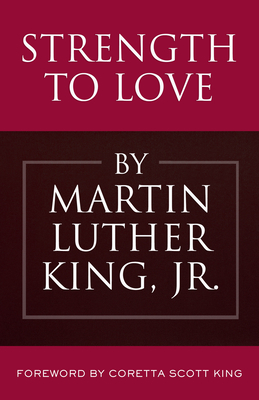 In these short meditative and sermonic pieces, Dr. King articulates his commitment to justice and to the intellectual, moral, and spiritual conversion that makes his work as much a blueprint today for Christian discipleship as it had been when he originally wrote it. Read More

In these short meditative and sermonic pieces, Dr. King articulates his commitment to justice and to the intellectual, moral, and spiritual conversion that makes his work as much a blueprint today for Christian discipleship as it had been when he originally wrote it. Read Less

All Editions of Strength to Love

A new anthology of essays exploring the philosophy of Martin Luther King, "To Shape a New World" (2018) (edited by Tommie Shelby and Brandon Terry) has moved me to explore for myself the five books King published during his lifetime. King was an activist during his busy life, cut short by assassination fifty years ago. It is valuable to explore the degree of reflective thought King brought to his activism.

King's second book, "Strength to Love" (1963) consists of 14 sermons King preached during or after the Montgomery Bus Boycott at the Dexter Avenue Baptist Church in Montgomery, Alabama, or at the Ebeneezer Baptist Church in Atlanta, Georgia. The book also includes a separate essay "Pilgrimage to Nonviolence" that addresses themes considered in the sermons. King states that he was reluctant to have the sermons published. He believed sermons were properly meant to be heard as a discourse on a single occasion rather than to be read. They were "directed toward the listening ear rather than the reading eye." King states that he published the volume only after the repeated requests of friends and colleagues in the hope that "a message may come to life for readers of these printed words."

King was a preacher by calling. It is what he was born and trained to do and in this book, as in his famous "I have a Dream" speech, it shows. This collection shows the influence of the African American Protestantism in which he was steeped upon King. It shows his way with words and his ability to move and inspire. Most importantly, the book shows King's thought, both on religious matters and on social activism. King tries to show how they are to be brought together. Of the books I have read by or about King, "Strength To Love" easily gives me the most understanding of King and what he was about.

What impressed me most about the book was its deep religiosity. King discusses what he sees as the need for transcendence if human life is to be meaningful. In common with many religiously-oriented thinkers, King views human life as a combination of the "eternal and the temporal". The sermons place a great deal of emphasis on the eternal. His understanding of the eternal played a great role in his temporal actions fighting injustice during his life.

King explores the nature of love, the interrelationship of all things, and the search for moral and ontological absolutes -- the existence of God -- rather than relativism. What he says is not necessarily original but it is expressed with power, eloquence, and sincerity. The book focuses at least as much on God and on worship as it does on the need for action to combat injustice in the world. In King's view a religious outlook drives his temporal efforts. He recognizes in the sermons that humanistic people could share in his efforts for social justice while not sharing his religious commitments. King respects this view but clearly rejects it for himself. The sermons address important theological and philosophical issues such as the relationship between science and religion, the mixture of good and evil in human nature, the problem of evil, fundamentalism and liberalism in approaching Scriptural texts and much more. King talks a great deal about his reading and studies and about the views that influenced him. I learned a great deal both about King and about the difficult questions he addresses.

The sermons I most enjoyed included "A Tough Mind and a Tender Heart" which explores the roles of justice and love in religious life, "Transformed Nonconformist" which emphasizes how religious life requires in part a response to the divine rather than simply to the mores of a society. "Shattered
Dreams" which discusses living with loss and disappointment, and "Paul's letter to American Christians" in which King effectively assumes the voice of Paul both to praise and to critique American society and Christianity. In "How should a Christian View Communism" King both articulates his own strong Christian, idealist commitments which rejecting the materialism and ethical relativism of communism. The final essay"Pilgrimage to Nonviolence" explores some of King's activism but it includes as well a great deal of information about King's intellectual growth.

This volume taught me a great deal about King's religious and philosophical thinking and about his commitment to social justice using nonviolent methods. The book has little of the radicalism found in some of King's latter writings. The book shows King at his best as a outstandingly gifted, thoughtful religious individual and African American minister. The book helped me understand King and his mission.

This book will make you examine yourself in your spiritual walk with the Lord. Are we doing what Jesus wants us to do?

Great book. We often forget about this man's intimacy with Jesus. A great look into the heart of one of the greatest leaders and where he draws his strength. King led from a heart that was fixed on Jesus and his strength to love grew from there.