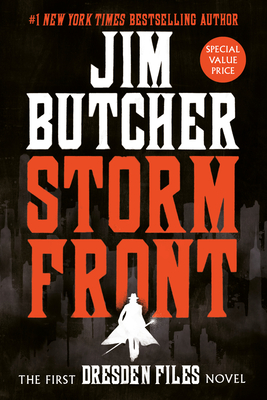 In this first book in the offbeat Dresden Files, readers are introduced to Harry Dresden, a wizard with a consulting practice in modern-day Chicago. Dresdens profession offers him little money, lots of mockery, the suspicion of his magical colleagues, and plenty of danger. Read More

In this first book in the offbeat Dresden Files, readers are introduced to Harry Dresden, a wizard with a consulting practice in modern-day Chicago. Dresdens profession offers him little money, lots of mockery, the suspicion of his magical colleagues, and plenty of danger. Read Less

All Editions of Storm Front

Started these because of the TV series: much darker, very fast-paced, hard to put down once you've started.

If you enjoy a great mystery with a supernatural theme, you will love the Dresden Files series. One of those books I could not put down until I finished it.

I'm not big on sci/fi fantasy but my husband is and he had me try this series. I didn't want to put this book down until I reached the end. After that you want to read the next to discover what adventures Harry Dresden finds himself. This series is a great read for anyone.

Funny all the way through

What fun! A wizard with his own consulting firm in modern day Chicago? What's not to like? I seem to have a weakness for grumpy characters, and Harry Dresden fits right in, until events start crashing down on him and he is revealed to be much nicer a guy than his front would suggest. I thought that was a nice attention to character detail, because in real life, a stony facade will not necessarily hold up through life-threatening situations. A person is only a person, even if he's a wizard.
Butcher populates his alternate Chicago with enough weird beings and doubting people (many of both categories being associates of Harry) to capture the imagination. The series feels like a fresh spin on magic and wizardry, and I'll definitely check out the following books.
The novel follows Harry Dresden as he attempts to make rent, stay on the good side of the White Council of wizards who don't trust him despite his spotless intentions, and help out the Chicago PD whenever something weird pops up. And something weird DOES pop up...so much so that Harry not only has to figure out who's wreaking this magical havoc, but remove himself from the list of suspects.
Great fun, and often hilarious. Have a blast.

Having never seen the tv series, this reminded me a lot of Tanya Huff's 'Blood Books'. I like Harry a lot! He is down to earth, sarcasticly funny, and a great wizard. In 'Storm Front' he spends all his time fighting for his life. The turn of each chapter has you wondering, how will he survive? I especially loved his skull, Bob. Bob is funnier than Harry. I did find it distracting that Harry was running aroung in sweat pants, cowboy boots and a black duster. Not quite a hero's outfit. I'm eagier to begin the next in the Dresden Files, to find out more of Harry's past.