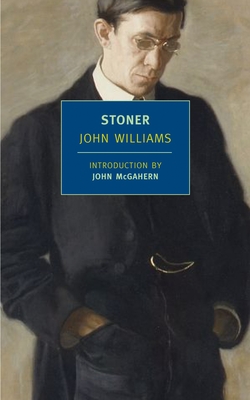 John Williams's deeply moving novel is a work of quiet perfection. William Stoner emerges not only as an archetypal American but as an unlikely existential hero, standing in stark relief against an unforgiving world. Read More

John Williams's deeply moving novel is a work of quiet perfection. William Stoner emerges not only as an archetypal American but as an unlikely existential hero, standing in stark relief against an unforgiving world. Read Less

All Editions of Stoner

In a pivotal scene in John Williams' novel, "Stoner" (1965) three young graduate students in their cups are discussing the nature and goal of university education. It is the type of discussion that doubtless has happened many times. The participants are William Stoner, the protagonist of the book, and his friends Gordon Finch and David Masters. While the focus of the novel is on Stoner, this scene belongs to David Masters. With the bravado and certainty of youth, Masters says that the University exists "for the dispossessed of the world; not for the students, not for the selfless pursuit of knowledge, not for any of the reasons that you hear." Although he is seemingly cynical about the role of the University, Masters is quite the opposite. He says: "We do no harm, we say what we want, and we get paid for it; and that's a triumph of natural virtue, or pretty damn close to it."

Masters' view of the University as a place for the dispossessed runs through Williams' novel. Stoner, the protagonist, is the only child of a struggling farm couple in Missouri who receives the opportunity to attend college in order to study scientific farming. He falls in love with literature instead, in a decision which alienates him from his parents and his past. It is part of the beauty and pain of the United States where people can make themselves. It also makes Stoner one of the world's dispossessed in what proves to be a difficult, if outwardly quiet life, teaching English for 38 years at the sole university he attended beginning with his undergraduate study. So too, the academic characters in this novel of academic life, including Stoner's friend Finch, his enemy and the chair of the English Department, Hollis Lomax, and his lover, Katherine Driscoll, and his mentor, Archer Sloane, share in common the love of study and various forms of dispossession which would make life outside the context of the university difficult for any of them.

Williams writes a beautifully restrained but full prose which gives insight into Stoner and his life. Stoner is a quiet, frequently passive individual who makes an unhappy marriage, loses the affection of his daughter, has an affair, and becomes stalled in his career at the rank of assistant professor. Due to the animus of the Department chair, Stoner is relegated to the teaching of Freshman English with an unfair and inconvenient schedule. With all his own shortcomings and inability to redress his situation, Stoner perseveres in the love of his life, literature, and ultimately learns about tying in his love with the sensual love of a woman. Stoner began his career as a so-so teacher unable to communicate his passion to his young and largely indifferent students but he learns over the course of his career how to make students feel something of the life of the mind. Study and the love of learning are contrasted in the book with learning "for the sake of" --- career, learning a skill, solving problems or attaining financial security. These competing views of education are in even sharper tension today than was the case during the setting of Stoner.

The novel is largely set in a state university in Columbia, Missouri. The events of Stoner's seemingly quiet life are juxtaposed with the momentous events of his 38-year teaching career which concludes in 1956 -- WW I, the Depression, WW II, and the Korean and Cold Wars. The influence of these events is palpable but somehow muted in the novel by the focus on the life of the mind and heart in the person of Stoner.

"Stoner" received little attention when it was first published, but the book gradually found its readers. I think the book will have most appeal to those readers with a serious interest in study or a serious love for their job of whatever type. It is a sad, beautifully written reflective book that I am glad to have found at last.

This beautifully written novel takes its protagonist, William Stoner, from farmboy to college English professor in the period between the two world wars in the first half of the 20th century. The development of the central character and his struggles and changes--within his profession, in his unfortunate marriage, and in his brief but satisfying affair with a student--engage and fascinate while at the same time illuminating the purpose of his life by the time he reaches the end of that life.
Skip it if you will be bored by campus politics and the descriptions of student discussions of English literature; but for me those sections were riveting, as they touched on central beliefs of the characters--both students, professors, and administrators.
This is the kind of intense reading experience that makes you put the book down for a bit just so that you can think about what has just happened, what has been said and what has been left unsaid.
Stoner will stay with you--perhaps forever.

And so, providence, or society, or fate, or whatever name you want to give it has created this hovel for us (teachers) so that we can go in out of the storm. It's for us that the University exists, for the dispossessed of the world, not for the students, not for the selfless pursuit of knowledge.
- Stoner, p. 31

During the last sixty years, the ?academic novel? has become an enduring genre in American literature. Even after half a century, a number of exceptional works still reflect the academic world with admirable authenticity: Edward Albee?s Who?s Afraid of Virginia Woolf (1962); Mary McCarthy?s The Groves of Academe (1964) and Bernard Malamud?s hilarious A New Life (1964). Invariably, American writers have found colleges and universities to be powerful microcosms ? a kind of distillation of the best and worst of our culture and values.

Recently, the New York Review of Books named John Williams? Stoner a ?neglected classic.? Essentially, NYRB found the author?s depiction of the ?outwardly undistinguished career of an assistant professor of English
within the walls of a university? to be a kind of meditation on the rueful consequences of devoting one?s life to teaching. Stoner is, in many ways, a bleak and lonely sojourn; yet when Professor William Stoner comes to the end of his life, he judges himself to have been both fortunate and blessed.

Born to a poor farming family, young Stoner seems destined to follow his father?s example; however the advice of a county farm agent prompts the boy?s parents to send him to the University of Columbia ?to study Agriculture.? William pays his tuition by working on a nearby farm and he plods numbly through his first year. However, a chance remark by his English teacher, Archer Sloan, sparks an interest in literature that, in turn, fills this ignorant young man with vague yearning for things he had not previously known existed. Eventually, William Stoner changes his major (a decision that leaves him guilt-ridden), and he begins the long and arduous pursuit of a doctorate degree in medieval literature. Eventually, under the guidance of Archer Sloan, he will acquire a full-time teaching position at Columbia University.

As the years pass, Stoner finds his dreams elusive. A close friend dies on a battlefield in France during WWI; another friend, Gordon Finch, becomes an academic dean and Stoner?s life-long friend. His marriage to Edith, a banker?s daughter turns into a loveless, bitter travesty and the grand ideals contained in the literature that he loves remain elusive specters. Stoner is rarely able to communicate the beauty that he perceives in poetry and drama, but he lives for those brief moments when he speaks clearly and his students hear him.

The birth of his daughter, Grace, fills Stoner with a momentary joy, but within a few years, he finds himself locked in a fierce struggle with his wife for Grace?s attention. His mentor, Archer Sloan dies and the University?s indifference to his passing shocks Stoner. A brilliant and arrogant department head becomes a bitter enemy and Stoner spends much of his time in his office immersed in his lecture notes and research.

Life passes, WW II comes and goes, taking another group of Stoner?s best students. Stoner is relegated to teaching freshman composition and students begin to comment on his eccentric behavior. However, it is at this point, when this middle-aged scholar is at his lowest ebb, he finds himself abruptly swept from his bleak, prosaic life into a world in which his ?vague yearnings? are fully realized.

The agent of change is a woman, of course ? Katherine Driscoll, a student that is twenty years his junior - a woman who shares his nearly incoherent love for literature. So all that has been denied to this lonely man is suddenly (briefly), realized. Stoner is swept into an affair that borders on being a cliché ? an aging lover and a vital young woman who is the fulfillment of his secret dreams. However, the scenes between Stoner and Katherine are among the most vivid and vital episodes in this novel.

This is by no means the conclusion of Stoner. There are other indignities to be borne and other battles to lose.
However, this brief episode changes Stoner in fundamental ways. Belatedly, he develops a survival strategy and adheres to it. He learns to accept ?things as they are,? and begins to emulate the stoic fortitude of his parents.

On the first page of this novel, the author makes the following statement regarding the death of his protagonist: ?Stoner?s colleagues, who held him in no particular esteem when he was alive, speak of him rarely now; to the older ones his name is a reminder of the end that awaits them all, and to the younger ones it is merely a sound that evokes no sense of the past and no identity with which they can associate themselves or their careers.?

When I finished this novel, I found myself remembering the numerous competent (dependable) instructors who passed through the corridors of my own alma mater ? the ones who survive because of their low-key existence and ?protective camouflage.? We remember the ?campus characters,? but we soon forget the patient, dedicated yeoman who toil quietly and then make their exit silently. Were there, perhaps, Stoner?s among them?