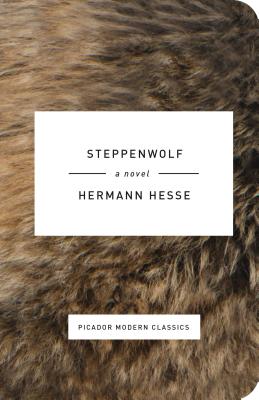 A modernist work of profound wisdom that continues to enthral readers with its subtle blend of Eastern mysticism and Western culture, the Penguin Modern Classics edition of Hermann Hesse's Steppenwolf is revised by Walter Sorell from the original translation by Basil Creighton. At first sight Harry Haller seems a respectable, educated man. In reality he is the Steppenwolf: wild, strange, alienated from society and repulsed by the modern age. But as he is drawn into a series of dreamlike and sometimes savage encounters - ... Read More

A modernist work of profound wisdom that continues to enthral readers with its subtle blend of Eastern mysticism and Western culture, the Penguin Modern Classics edition of Hermann Hesse's Steppenwolf is revised by Walter Sorell from the original translation by Basil Creighton. At first sight Harry Haller seems a respectable, educated man. In reality he is the Steppenwolf: wild, strange, alienated from society and repulsed by the modern age. But as he is drawn into a series of dreamlike and sometimes savage encounters - accompanied by, among others, Mozart, Goethe and the bewitching Hermione - the misanthropic Haller discovers a higher truth, and the possibility of happiness. This blistering portrayal of a man who feels himself to be half-human and half-wolf was the bible of the 1960s counterculture, capturing the mood of a disaffected generation, and remains a haunting story of estrangement and redemption. Herman Hesse (1877 - 1962) suffered from depression and weathered series of personal crises which led him to undergo psychoanalysis with J. B. Lang; a process which resulted in Demian (1919), a novel whose main character is torn between the orderliness of bourgeois existence and the turbulent and enticing world of sensual experience. This dichotomy is prominent in Hesse's subsequent novels, including Siddhartha (1922), Steppenwolf (1927), Narcissus and Goldmund (1930) and his magnum opus, The Glass Bead Game (1943). Hesse was awarded the Nobel Prize for Literature in 1946. If you enjoyed Steppenwolf, you might like Hesse's Siddhartha, also available in Penguin Classics. 'A savage indictment of bourgeois society ... the gripping and fascinating story of disease in a man's soul' The New York Times Read Less

All Editions of Steppenwolf

Rereading Steppenwolf After Many Years

I first read Herman Hesse's novel "Steppenwolf" in the late 1960s, as did many baby boomers. Although I loved the novel at the time, I gradually became embarrassed by the book as an error of my youth My growing disenchantment, probably was due to my increased discomfort with the counterculture, which never appealed to me, and to "Steppenwolf's" adoption by the movement. I have always been generally conservative about most things. My unwillingness to revisit the book persisted even when I became seriously interest in Buddhism, more than fifteen years ago. I decided to revisit "Steppenwolf" upon reading a recent book about philosophy. The author mentioned Hesse's novel several times and obviously thought a great deal of it. The references in a book I liked prompted me to reread "Steppenwolf" at last.

After rereading the book, I thought that I was right to love it upon the first reading, right to leave it alone for more that 40 years, and right to revisit it. As with so many books, "Steppenwolf" loses something when read by the young. In a 1961 author's note, Hesse claimed that "Steppenwolf" often was "violently misunderstood". He attributed the misunderstanding in part to the book's popularity with young readers. Hesse also pointed out that the book tended to attract loners and intellectuals who identified with the loneliness and apparent alienation of Harry Haller, the novel's main character. This certainly would have been true in my case. Hesse wrote:

"[T]his book knows of and speaks about other things besides Harry Haller and his difficulties, about a second,higher, indestructible world beyond the Steppenwolf and his problematic life. The 'Treatise' and all those spots in the book dealing with matters of the spirit, of the arts, and the 'immortal' men oppose the Steppenwolf's world of suffering with a positive, serene, superpersonal and timeless world of faith. This book, no doubt, tells of griefs and needs; still, it is not a book of a man despairing but of a man believing."

The book tells of Harry Haller's, the "Steppenwolf's" redemption from a life of loneliness and despair through his efforts at writing and self-understanding and through largely hallucinatory meetings with a range of characters, including his alter-ego Hermione, a lover, Marie, a strange saxophonist and band leader, Pablo, and the historical figures Goethe and Mozart. Much of the story is set in bars and in Harry's lonely rooms, as he revisits his impoverished love life, divorce, loneliness, and wanderings. A long final scene is set a strange "Magic Theater" where Harry undergoes a series of transformative, if sometimes shocking experiences.

The "Magic Theater" and a small number of ambiguously meant references to drug use in the course of the novel understandably contributed to its appeal to the counterculture. The book has also been read as a strong critique of "bourgeois" society and its
conformity, an interpretation I find misdirected. Harry comes to terms with his life and with the different aspects of himself during the novel. He learns to accept the "bourgeois" world of respectability and business just as he learns to accept and be happy with his own sexuality, learning, independence, and his past. Harry learns to love his life as it is.

The strongest parts of the book are the long descriptions of spiritual Buddhist-derived teachings which discuss the nature of selfhood and the need for letting go and acceptance. The book relies heavily on Buddhist teachings on the lack of a fixed, substantial self. The book integrates Buddhist teachings with Harry's tortured experiences to offer a convincing, if extreme, novelistic portrayal of non-self. I learned much more from rereading this book after I had acquired both "life experiences" and a rudimentary knowledge of Buddhism than I learned when I was young and more foolish and when I knew comparatively little about Buddhism.

Hesse (1877 -- 1962) was born in Germany but became a Swiss citizen in 1923. He wrote the strongly autobiographical "Steppenwolf" in 1927, and it was first translated into English in 1929. The popularity of the book soared in the 1960s and has remained high. Those readers who read "Steppenwolf" when they were young, as I did, might well enjoy revisiting and rethinking the book as they have gone forward in life.

An interesting book, the title accurately describes the protagonist who is indeed a wolf of the steppes.