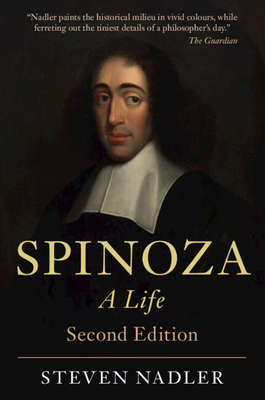 Baruch Spinoza (1632-1677) was one of the most important philosophers of all time; he was also one of the most radical and controversial. The story of Spinoza's life takes the reader into the heart of Jewish Amsterdam in the seventeenth century and, with Spinoza's exile from Judaism, into the midst of the tumultuous political, social, intellectual, and religious world of the young Dutch Republic. This new edition of Steven Nadler's biography, winner of the Koret Jewish Book Award for biography and translated into a dozen ... Read More

Baruch Spinoza (1632-1677) was one of the most important philosophers of all time; he was also one of the most radical and controversial. The story of Spinoza's life takes the reader into the heart of Jewish Amsterdam in the seventeenth century and, with Spinoza's exile from Judaism, into the midst of the tumultuous political, social, intellectual, and religious world of the young Dutch Republic. This new edition of Steven Nadler's biography, winner of the Koret Jewish Book Award for biography and translated into a dozen languages, is enhanced by exciting new archival discoveries about his family background, his youth, and the various philosophical, political, and religious contexts of his life and works. There is more detail about his family's business and communal activities, about his relationships with friends and correspondents, and about the development of his writings, which were so scandalous to his contemporaries. Read Less

All Editions of Spinoza: A Life

Think Least of Death: Spinoza on How to Live and How to Die

A Book Forged in Hell: Spinoza's Scandalous Treatise and the Birth of the Secular Age

Radical Enlightenment: Philosophy and the Making of Modernity 1650-1750

by Jonathan I Israel

Betraying Spinoza: The Renegade Jew Who Gave Us Modernity

Within Reason: A Life of Spinoza

A Biography Of A Great Philosopher

Benedict Spinoza (1632-1677) is one of the most influential philosophers in history. As a young man, her was excommunicated by the elders of the Jewish community in Amsterdam and subsequently came to be regarded by some as a "secular saint" and by others as an infamous atheist. Although there are many legends and myths about Spinoza's life, there has been no extended biography in English until Nadler's study. In fact, outside of brief accounts written shortly after Spinoza's death, this book is probably the first extended treatment of Spinoza's life in any language.

Given the scarcity of biographical information, Nadler does an excellent job in placing Spinoza's life in historical context. He discusses in detail how the Jewish community in Amsterdam became established, precariously, by immigrants from the Inquisition in Spain and Portugal. He describes the efforts the Jewish community made to win acceptance in Amsterdam, the place of Spinoza's family in the Jewish community, and the rabbis and leaders of the community. Some of this material is well-known, others of it is less so. It is all valuable to getting to understand Spinoza.

There is a great deal of discussion of the history of the Dutch republic in Spinoza's time. Nadler's discussion includes both internal affairs (the tension between those who wanted a powerful monarch and those who wanted republican institutions) and the complex foreign wars and shifting alliances of the Netherlands during Spinoza's time. I never could make sense of this material before, but Nadler has discussed it well and in sufficient detail to provide a good background in understanding Spinoza's political ideas.

Nadler's book is not itself a philosophical study. But he treats carefully and instructively the origin of Spinoza's works and he summarizes their complex ideas well. He does not limit his discussion to the Ethics. Instead, Nadler spends a great deal of time on the Theological-Political Treatise which he rightly views as a neglected masterpiece complementary to the Ethics. There are also good discussions of Spinoza's unfinished "Hebrew Grammar" and, particularly, of the Epistles, as well as of his other works.

Nadler has a good sense of Spinoza's naturalism encompassed be the famous phrase "deus, siva natura". He gives the reader a good feel for the revolutionary nature of Spinoza's thought and shows how and why Spinoza departed from the traditional religious belief of his day.
Nadler is a careful in his use of sources. He tells the reader what evidence from a record both complex and sparse he accepts, what he doubts, and why. When Nadler draws a conclusion that goes beyond the available evidence, he tells the reader that he has done so and why he has done so. This is measured, careful writing about a figure Nadler obviously admires.

There is much creative detail in this book as Nadler draws on recent scholarship to cast light on Spinoza and his times. For example, he relies substantially on the report made to the Inquisition of a person who knew Spinoza in Amsterdam. He discusses the Sabatti Zvi incident (a false Jewish Messiah who appealed to many people during Spinoza's lifetime) and Spinoza's possible knowledge of it. The book debunks the myth of Spinoza as a recluse. One of the strongest features of the book is its picture of Spinoza's intellectual circle and of his relationship to many friends.
The book doesn't include a critical analysis of Spinoza's thought. Such studies are legion and there still is much to say and learn. Also, the book doesn't discuss the reception and influence of Spinoza through the years. Again, this is beyond the scope of the book. The book is an excellent biography of a seminal figure in Western philosophy. I came away from the book with a increased understanding of and appreciation for Spinoza's life and thought.