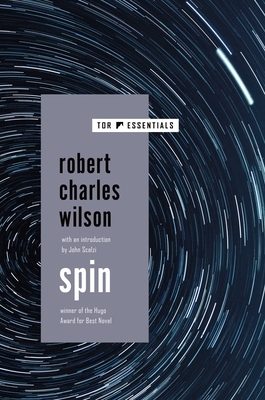 In this spectacular new SF novel of immense scope, an artificial, alien barrier is placed around the Earth, the moon and stars disappear, and scientists discover that time is passing faster outside the barrier than it is on the planet. Read More

In this spectacular new SF novel of immense scope, an artificial, alien barrier is placed around the Earth, the moon and stars disappear, and scientists discover that time is passing faster outside the barrier than it is on the planet. Read Less

All Editions of Spin

"Hard science", great new ideas, fine writing style. I enjoyed this book, but it took a while to get into. But it was totally worth it.

It's a little difficult to write a thorough review of "Spin," by Robert Charles Wilson, without giving away parts of the plot. It's not that this book relies solely on surprises or secrets, merely that part of the pleasure of the story comes with the new developments in the lives of the protagonists as well as the lives of all humanity.
The novel follows a rather familiar format in that our narrator is the bright-but-average friend of a genius; this genius turns out to be a major player in world events, and our narrator is there to observe as things unfold. However well-worn this literary setup may be, it is still quite effective as a story-telling device. It allows the readers to see fantastic events through the lens of someone not unlike themselves. As Earth is inexplicably enveloped in a membrane which blots out the stars, we have our average guy / proxy there to keep the heightened sci-fi aspects at a relatable level. The skill of Wilson is that Tyler, our protagonist, is a fully formed character with his own rich internal life. He isn't just plopped into the story as a placeholder for "average," even though that may be one of his ultimate functions.
Part mystery, part thriller, and part memoir, "Spin," is an incredibly satisfying read and I highly recommend it to fans of science fiction.

I managed to snag an advanced copy of this novel last week, which I finished in about a day and a half reading during lunch breaks, bathroom breaks and the hours before bedtime. As per usual, Wilson does an excellent job of keeping me up at night.

For those who are familiar with Robert Charles Wilson's work, "Spin" should come as no surprise. Most of his novels feature a conflicted protagonist who is caught up in storms of intrigue and extraordinary circumstances. Wilson's stories typically focus 70% on the characters and 30% on the science. His characters walk away from these experiences utterly changed, for better or for worse. Their arcs aren't always pleasant but usually realistic. You could easily put yourself into their shoes.

"Spin" is no exception.

As the previous reviewer pointed out, Wilson's one weakness is his endings. The endings are usually a rush to tie together loose ends, explain away anything that wasn't properly explained before. "Blind Lake" fell into this trap. "The Chronoliths" did not. Thankfully, "Spin" falls into the latter category.