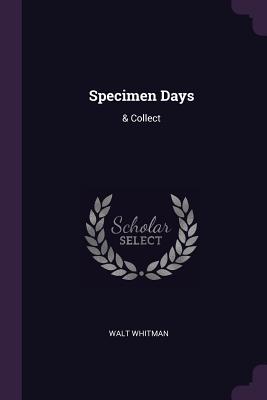 "Whitman's uniquely revealing impressions of the people, places, and events of his time. One of the most creative and individual poets America has produced, Walt Whitman was also a prolific diarist, note-taker, and essayist whose intimate observations and reflections have profoundly deepened understanding of nineteenth-century American life. Specimen Days and Collect, first published in 1882, is a choice collection of Whitman's uniquely revealing impressions of the people, places, and events of his time, principally the era of the Civil War and its aftermath. On page after page, a vast panorama of American life unfolds, and with it rare glimpse of Whitman as poet, empathetic observer, and romantic wanderer. From his years as a wartime nurse in Washington, D.C., come touching glimpses of the dead and dying in military hospitals, memories of Abraham Lincoln, and vivid impressions of the nation's capital in a time of great crisis. Whitman's travel yields memorable recollections of Boston, the Hudson Valley, a walk through Central Park, Niagara Falls, the City of Denver, and more. Along with the famed essay "Democratic Vistas," there are scenes from the poet's childhood, touching tributes to songbirds, wildflowers, friendship and freedom; impressions of the music of Beethoven, reflections on a last visit to Emerson, the deaths of Lincoln and Longfellow and the painful process of aging. Deeply felt and vividly expressed, Specimen Days and Collect is a richly rewarding experience, a rare excursion into the mind and heard of one of America's greatest poets--and the America his poetry so richly commemorated"-- Read Less

All Editions of Specimen Days & Collect

Leaves of Grass: The Original 1855 Edition

Walt Whitman's "Specimen Days" is an unusual work consisting of many short paragraphs, diary entries, or memorandums of moments in the poet's life, beginning with some vignettes about his ancestors and about his early life in Long Island and Brooklyn. Each of the many sections of the book opens with a heading describing its theme. In '"Specimen Days" opening paragraph, "A Happy Hour's Command", Whitman described the book as "incongruous and full of skips and jumps", moving from his Civil War memorandums to nature notes, to observations of Canada and the West "all bundled up and tied by a big string." With his customary hype, Whitman described "Specimen Days" as "the most wayward, spontaneous, fragmentary book ever penned."

In the book's concluding paragraph, Whitman looked back at the work and summarized its purpose in a beautiful passage about the diversity of the United States. "I have wanted, before departure, to bear special testimony to a very old lesson and requisite. American Democracy, in its myriad personalities, in factories, work-shops, stores, offices, -- through the dense streets and houses of cities, and all their manifold sophisticated life -- must either be fibred, vitalized by regular contact with out-door light and air and growths, farm-scenes, animals, fields, trees, birds, sun-warmth and free skies or it will certainly dwindle and pale." Whitman combined this broad picture of American democracy with the intimate, momentary character of the moments he described in order to suggest the value of living in and cherishing one's daily experiences. Thus "Specimen Days" concludes: "Perhaps indeed the efforts of the true poets, founders, religions, literatures, all ages, have been and ever will be, our time and times to come, essentially the same -- to bring people back from their persistent strayings and sickly abstractions, to the costless average, divine, original concrete".

In the best-known and longest part of "Specimen Days" Whitman describes his experiences from 1862 -- 1865 mostly in Washington, D.C., during the Civil War. Whitman spent much time as a volunteer in military hospitals offering comfort to wounded, sick, and dying soldiers. The book is poignant in its many brief depictions of individual heroic soldiers and of Whitman's ministrations. The book also offers Whitman's thoughts on the issues of the War. It shows a close observation of the Washington, D.C. of the Civil War, naming streets and places and offering many glimpses of Abraham Lincoln. As a resident of Washington, D.C. I enjoyed the immediacy of Whitman's account and of his depiction of particular places and streets I have come to know. Whitman has a unique vision of the War and he describes what he knows as a witness. Among many other things, he describes Lincoln's assassination. The Civil War section of "Specimen Days" is invaluable for students of the Civil War. In his final paragraph on the Civil War, Whitman observed that "The Real War Will Never Get In the Books." He amplified his thought as it related to his experience with the wounded.

"Such was the war. It was not a quadrille in a ball-room. Its interior history will not only never be written -- its practicality, minutae of deeds and passions, will never be even suggested. The actual soldier of 1862 -- '65, North and South, with all his ways, his incredible dauntlessness, habits, practices, tastes, language, his fierce friendship, his appetite, rankness, his superb strength and animality, lawless gait, and a hundred unnamed lights and shades of camp, I say, will never be written -- perhaps must not and should not be."

Following the depiction of his Civil War experiences, Whitman skips over the years from 1867 -- 1873 when he worked for the Office of the Attorney General. In 1873, Whitman suffered a stroke which left him bedridden for several years. When "Specimen Days" resumes, Whitman is living in Camden, New Jersey, and he is able with difficulty to move around. In exquisite detail, Whitman describes incidents of his life when he communes with nature, in fields, forests, and near the river. The Civil War section of "Specimen Days" describes life in a busy city at a hectic time. The following section is a dramatic about-face as Whitman communes with nature in solitude. Whitman offers many word-paintings of nature, birds, fish, insects, flowers, trees, in his many quiet moments during his recovery from illness.

In the following sections of "Specimen Days" Whitman again becomes more active. He takes several trips to New York City and Brooklyn, Canada, and Denver and the prairies of the West. Whitman describes with great enthusiasm his train trips, the people he knows and meets, and the places he visits. He is enamored of the West and of its people and of the promise he finds in it for the United States. He is also moved by change in the New York City he knew when young. With all the depictions of nature and of solitude in "Specimen Days", Whitman's heart remains with the city, with wandering, and with new places.

Whitman discusses in the final sections of "Specimen Days" his feelings about his contemporaries. He discusses Lincoln and lectures he delivered on Lincoln's assassination. He also discusses philosophy, including some highly complimentary and insightful observations about Hegel. But most of the people he discusses are literary figures, Whitman's predecessors and contemporaries including Longfellow, Bryant, Poe, Carlyle, and most of all Emerson. Whitman discusses the influence of these writers upon him, his meetings with them, and their deaths. He offers absorbing comments on his predecessors and on his hopes for a broad-based American literature to come based on Democracy and unity.

I enjoyed this book a great deal, and it will interest readers who know Whitman only as a poet. Whitman has a vision for America and a vision for himself, in enjoying the specimen moments of his life and in being present spontaneously and immediately for his experiences, which he combines somehow and shares with the reader. The book is available in several editions as well as in the Library of America volume "Walt Whitman: Complete Poetry and Collected Prose".

A Darkening of Vision

Published in 1882, Specimen Days is of interest to the contemporary reader mainly for Walt Whitman's journal entries of his hospital experiences tending to soldiers in Washington during the Civil War. What is striking is the poet's spare, telegraphic style, making use of fragments, omitting the "I," almost as though the scene takes precedent over the seer, who becomes an empathetic spirit hovering over the war's horror, yet reducing it to human scale. And what Whitman sees is terrible: a hill of severed limbs, the prisoners, those left lying on the battlefield for days, a body sloping downward, blood rushing to his head. Despite a staunch Unionist, the poet transcends the conflict between the States, between the industrial North and agrarian South, between slaveholders and abolitionists. He finds "good secesh's" among the enemy, and thus humanizes them, including one who treats and feeds a Union soldier. One is reminded again of Whitman's tenderness in his observation of a rebel soldier who dies in a ward adjacent to his Union brother. Surely Walter Benjamin is right that history is told from the perspective of the victor. But the great poet sees not only numerous acts of grace and kindness, but the trials that test character, the "animality" and lawlessness, the violations of the human committed by the common soldier. And he claims that the "real war"--its psychic, emotional and economic toll--may never be documented in books. Here is the darkening of Whitman's democratic vision, but the good gray poet does capture glimpses of that awful conflict exactly in words.