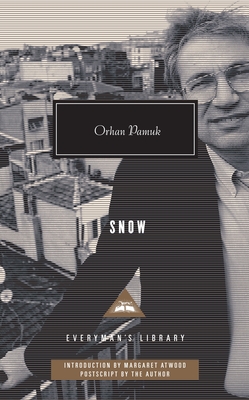 The year is 1992. Ka, a poet and political exile, returns to Turkey as a journalist, assigned to investigate troubling reports of suicide in the small and mysterious city of Kars on the Turkish border. The snow is falling fast as he arrives, and soon all roads are closed. There's a 'suicide epidemic' amongst young religious women forbidden to wear their headscarves. Islamists are poised to win the local elections and Ka is falling in love with the beautiful and radiant Ipek, now recently divorced. Amid blanketing ... Read More

The year is 1992. Ka, a poet and political exile, returns to Turkey as a journalist, assigned to investigate troubling reports of suicide in the small and mysterious city of Kars on the Turkish border. The snow is falling fast as he arrives, and soon all roads are closed. There's a 'suicide epidemic' amongst young religious women forbidden to wear their headscarves. Islamists are poised to win the local elections and Ka is falling in love with the beautiful and radiant Ipek, now recently divorced. Amid blanketing snowfall and universal suspicion, he finds himself pursued by terrorism in a city wasting away under the shadow of Europe. In the midst of growing religious and political violence, the stage is set for a terrible and desperate act . . . Touching, slyly comic, and humming with cerebral suspense, Snow evokes the spiritual fragility of the non-Western world, its ambivalence about the godless West, and its fury. 'A novel of profound relevance to our present moment' The Times Read Less

All Editions of Snow

A Strangeness in My Mind

Orhan Pamuk's novel "Snow" is a meditation on Religion, Poetry, Love, Gender relations, and Politics. It is a difficult, challenging work. Although the author himself described "Snow" as a political novel, it is much more. I learned something of Turkey and its politics from the book, but I was moved far more by the author's reflections on issues that transcend the politics of a particular place.

"Snow" is the story of a man known as Ka. Raised in a secular home in Istanbul, Ka is 42 and unmarried when the book begins. He has just returned from a 12 year political exile in Frankfurt, Germany to attend his mother's funeral. While in Istanbul, Ka arranges to visit a border Turkish city named Kars to cover the upcoming local elections (the mayor of Kars has just been assassinated), to investigate a rash of suicides among young Muslim women, and to try to kindle a romance with a beautiful woman named Ipek with whom he had been acquainted as a student and who has recently been divorced. Ka is a poet. During his years in Frankfurt, he never learned German but continued to write in Turkish. He had not been able to compose poetry during his final four years in Frankfurt and, during that time, he had had no romantic involvements. Ka's story is related in the voice of a writer named Orhan - creating some distance and some sense of irony -- who describes himself as a novelist and an old friend of the poet. He visits Kars four years after the death of his friend and tells his story.

Ka spends all of three days in Kars before returning again to Frankfurt, but the short time is eventful for the city and for the protagonist. He witnesses a murder in a cafe and a coup in which the military takes control of the city and suspends the upcoming elections. He becomes, briefly, sexually involved with Ipek. Although a secularist, he becomes drawn to religion and meets with a Shiek. He also has fateful encounters with a charismatic Islamic terrorist, Blue, with whom Ipek and her younger sister Kadiffe have been romantically involved. Perhaps most importantly, Ka finds himself able to write poetry again. In his few days in Kars, he composes 19 poems in bursts of inspiration, all but one of which he writes in a faded green notebook.

During Ka's visit, Kars is in the midst of a three-day snowstorm which closes access to the city. The falling snow is the critical symbol of the book which appears in virtually every chapter with many meanings. It symbolizes,variously, silence, isolation and loneliness, cold, purity, innocence, sadness, and much else. Ka becomes captured by the six-sided figure of the snowflake. The individuality of each snowflake becomes emblematic to him of the human condition. When he returns to Frankfurt after his three days in Kars, he devises an elaborate symbolism for the classification of the 19 poems he composed in the city based upon the six sides of the snowflake. Another pervasive symbolic object in the book is the dog -- both as a family pet and as a stray. Dogs appear on the streets as an object of affection and compassion.

Ka's short and tangled love affair with Ipek is at the center of this novel as Ka hopes to have her return with him to Frankfurt. This hope is dashed against Ka's own weaknesses and ambivalences, together with politics and chance. When he returns to Frankfurt, he becomes a lonely, alienated figure, unable to write poetry, who wanders the streets and becomes addicted to pornography. Four years after his return he is murdered under circumstances suggesting political motivation.

"Snow" has a great deal to say in its long discussions of the search for God, the nature of creativity, and the need for love. Pamuk's treatment of these universal human themes is intertwined carefully with his particularism -- his discussion of the streets, places and people of Kars. Pamuk also focuses upon the complex political situation of Turkey, torn by the wish to become part of the European community and retaining its religious, Muslim character. Secularism and religion are each represented in this book in several alternatives rather than by just two diametrically opposed groups. The tension in the local political situation becomes a symbol of range of choices that individuals in all cultures must face, as part of being human.

This book has received a variety of reviews. It is a slow, difficult work that may not be to everyone's liking. For those readers with a bent for philosophical and religious reflection, this is an outstanding novel.

In Snow, by Orhan Pamuk, a Nobel Prize recipient, its poet-protagonist Ka returns from exile in Germany to his hometown Istanbul to investigate the suicide of young girls as a result of a head scarf ban. While repression of Muslim women is a theme, the epic novel also explores the conflict between Western secularism and Islamist fundamentalism, state police repression, Kurdish separatism, terrorism, and the mediation of reality through technology, so that "all the world's a stage." Pamuk effectively dramatizes the poverty and grievances in Turkey, the ideological and theocratic murk of Middle Eastern politics, the felt passions and violence. One implausibility: Ka's poems come fully formed on the page; he apparently never revises. Snow is one of the few contemporary novels I've read that plunges the reader deeply into the intrigue of this shadow-world; Pamuk is too knowing not to reduce such complication into an oversimplified "clash of civilizations."

"One of the pleasures of writing this novel, was to say to my Turkish readers and to my international audience, openly and a bit provocatively, but honestly, that what they call a terrorist is first of all a human being. Our secularists, who are always relying on the army and who are destroying Turkey's democracy, hated this book because here you have a deliberate attempt by a person who was never religious in his life to understand why someone ends up being what we or the Western world calls an Islamic fundamentalist terrorist."
-Orhan Pamuk

Whether you are new to the writings of Orhan Pamuk or like me, a convert to his work in translation, you will find the book, "Snow," is packed, nay; overflowing with Turkish humanity. In Orhan Pamuk's self-avowed first (and last) political novel, the disaffected and somewhat anesthesitized inhabitants of Kars find their imperfect voice in his newest novel. Through mad-cap theatrical coup and broad, windy statements to an imagined and unhearing "Western Press," the reader is ingeniously treated and sometimes led by the nose through the complexity of an Islamic society that desires access to its past and admittance to the modern world.

Understanding is everything, although it can't immediately change anything. The readers of "Snow" will find many intricately-drawn zany characters, who represent a spectrum of political fundamentalist Islam; its adherents, admirers and detractors. All are deliciously served up on an exotic Turkish platter and are no less appealing for the remote locale.

As a reader, I am consistently amazed by Mr. Pamuk's stellar ability to give authentic, credible voice to a wide array of eccentric characters, each effortlessly recognizable for all their foible. There is a remarkable, transcendent levity to Pamuk's depiction of what are deeply tragic events; a rather mystical take on the "ship of fools" theory of life. When a young fundamentalist student in the book expresses his desire to become the "first Islamic science fiction writer" it is wistful, encouraging and poignant statement. The people of Kars do not by any means lack for voice. What they lack is a stable political vehicle that allows a coherent telling of their tale.

The varying degree of political involvement portrayed in the aloof dreaminess of love-sick Ka, ex-leftist, poet and main character, the complex hyperbole of Blue, fundamentalist outlaw, and Kadife, a forthright "westernized" girl from Istanbul converted to head-scarf activism represent the voices we don't usually hear behind the sad ubiquity of exploding bombs.

There are plenty of Pamukian literary devices in this novel that address the author's recurring themes and symbols. These have to do with questions of identity and metaphysics. Some note has been made in reviews here (USA) pondering the possible meaning(s) of Ka's name. I am told the author was influenced by Kafka. If readers of "Snow," desire a clue to the meaning or significance of the town's name, ("Kars") see the ending pages of "The New Life (also highly recommended)."

Every author has his own retinue of literary device and Mr. Pamuk continues to employ his own abundantly. The symbol of snow (in Turkish, "kar") is both tender metaphor and unifying symbol. Snowfall covers everything in the novel (and everyone) indiscriminately, possessing the miraculous nature of each snowflake's distinct design. Distinct design also aptly describes the Kars citizenry.

As I was finishing this valuable, well-written book, an Islamic faction in Iraq was holding two French journalists hostage, demanding that France lift its ban on the wearing of head-scarves by Muslim girls in French public schools. The underlying controversy of the book? A ban on head scarves in Turkish public schools by the state officials of Kars, resulting in a wave of suicides by young girls. Or was that the actual reason? Decide for yourself, by reading "Snow". One of the great fortuitous compliments I imagine an author receives (to his probable chagrin) is life attempting awkward imitation of his art. (Mr. Pamuk began this book before 9/11).

Understanding is everything, even when it changes nothing. Perhaps it is all we, at times, can do.