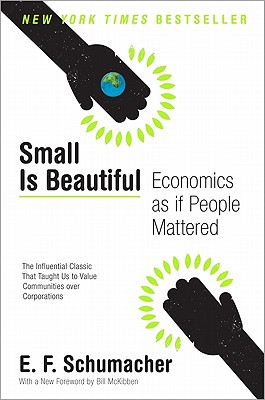 Small Is Beautiful: Economics as If People Mattered

As relevant as when it was first published, Small Is Beautiful is an eloquent exploration of economic programs that take the average person into consideration. Read More

As relevant as when it was first published, Small Is Beautiful is an eloquent exploration of economic programs that take the average person into consideration. Read Less

All Editions of Small Is Beautiful: Economics as If People Mattered

A Guide for the Perplexed

Less is More: The Art of Voluntary Poverty an Anthology of Ancient and Modern Voices Raised

The Theory of the Leisure Class

Collapse: How Societies Choose to Fail or Succeed

Deep Economy: The Wealth of Communities and the Durable Future

Rereading Small is Beautiful by E F Schumacher, the classic first published in 1973, I could see how people thought it was visionary. How could anyone be against economics as if people mattered?

But when you examine the text closely, Schumacher cites no data to back up his conclusions. Moreover, some things he says are the opposite of what has actually happened. For instance, he says, "People who live in highly self-sufficient local communities are less likely to get in large scale violence than people whose existence depends on world wide systems of trade."

The 21st century Age of Globalization with its world wide systems of trade is many times more peaceful than tribal or feudal times. Frederic Bastiat, 19th century economist said, "If goods don't cross borders, soldiers will." Steven Pinker in The Better Angels of Our Nature points out when both parties trade, it's win-win, but if one party raids the other, even if the raiders get the goods, they still have to pay the costs of the raid. It's said that no two countries with a McDonald's have had a war.

We have an historical example of a system of highly self-sufficient local communities. It was called the medieval manorial system, otherwise known as the Dark Ages. There was widespread hunger, disease, illiteracy, superstition, and violence. True, the violence wasn't large scale, but the small scale violence more than made up (by an order of magnitude) for the lack of large scale violence. There was nearly constant raiding and marauding in what historian Barbara Tuchman calls "private wars."

In the Middle Ages all farming was organic and food miles were short. They had to be because there were no ways to transport food when local crops failed. Yields were small, besides some land had to lie fallow or be used to raise fodder. Hence famines were frequent. Disease followed hunger. The Black Plague killed at least a third of the undernourished population after the Great Famine of 1315-17. People blamed the lepers, the Jews, and the witches for the bad times so they tortured them to death.

The 14th century was a Small is Beautiful world. Was there culture? Not when most people were illiterate. Was there peace? No, there was almost constant war among competing fiefdoms. Was there liberty? Not for the 95% of the population who were serfs. (Serfs were one step up from a chattel slave; they couldn't be sold individually, but they had to stay with the land.) Was there justice? Not if you recall the grisly public torture-executions for offenses that aren't even illegal today.

Everyone should read this book especially economists.