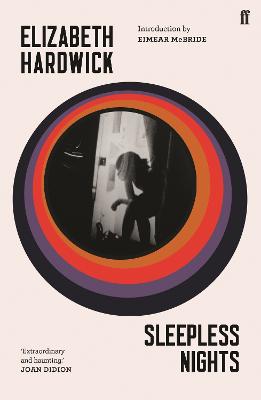 Sally Rooney: 'A series of fleeting images and memories ... united by the high intelligence and beauty of Hardwick's prose.' Rediscover a lost American classic: Sleepless Nights, a kaleidoscopic scrapbook of one woman's memories, here reissued with a new introduction by Eimear McBride. I am alone here in New York, no longer a we ... First published in 1979, Sleepless Nights is a unique collage of fiction and memoir, letters and essays, portraits and dreams. It is more than the story of a life: it is Elizabeth Hardwick's ... Read More

Sally Rooney: 'A series of fleeting images and memories ... united by the high intelligence and beauty of Hardwick's prose.' Rediscover a lost American classic: Sleepless Nights, a kaleidoscopic scrapbook of one woman's memories, here reissued with a new introduction by Eimear McBride. I am alone here in New York, no longer a we ... First published in 1979, Sleepless Nights is a unique collage of fiction and memoir, letters and essays, portraits and dreams. It is more than the story of a life: it is Elizabeth Hardwick's experience of womanhood in the twentieth century. Escaping her childhood home of Kentucky, the narrator arrives at a bohemian hotel in Manhattan filled with 'drunks, actors, gamblers ... love and alcohol and clothes on the floor.' Here begin the erotic affairs and dinner parties, the abortions and heartbreaks, the friendships and 'people I have buried'. Here are luminous sketches of characters she has met that illuminate the era's racism, sexism, and poverty. Above all, here is prose blurring into poetry, language to lose - and perhaps to find - yourself in. Society tries to write these lives before they are lived. It does not always succeed. Read Less

All Editions of Sleepless Nights

The Unpossessed: A Novel of the Thirties

The Collected Essays of Elizabeth Hardwick

The Dolphin Letters, 1970-1979: Elizabeth Hardwick, Robert Lowell, and Their Circle

A Sport and a Pastime

I first read Elizabeth Hardwick's short novel "Sleepless Nights" (1979) on a long trip early in the 1980s during a time of change for me. I was greatly moved by the book at the time. The factors which first drew me to the book have prompted me to read it again. The book is a beautifully sad evocation of memory and loneliness and loving one's life.

Born in Lexington, Kentucky, Hardwick (1916 -- 2007) became a New York intellectual who was a co-founder of the New York Review of Books. She is known for her sharp wit, her essays, and for this novel. Hardwick also endured a long, difficult marriage to the American poet, Robert Lowell. Although "Sleepless Nights" is partially autobiographical, it is unnecessary to know much about Hardwick in order to respond to the book.

Hardwick's novel is plotless. The story is told as a series of episodes disconnected in place and time with no underlying theme but memory. This was a deliberate decision on the author's part as Hardwick thought that the modern novel had to mirror modern life in its episodic, shifting character without the distraction of a contrived set of events. The book is told in the voice of an aged narrator, a "production of a broken old woman in a squalid nursing home", as she remembers or tries to remember events from her past. "Make a decision" she says, "and what you want from the lost things will present itself." A substantial part of the story is told in letters or other communications to the narrator's otherwise unidentified friend, M. The time frame of the story is from the 1930s to the early 1970s.

At the end of the book, the narrator offers a summary of her reflections as she remembers "the torment of personal relations", "the reading glasses and the assignation near the clammy faces, so gray, of the intense church ladies. And then a lifetime with its mound of men climbing on and off." The narrator concludes that "I love to be known by those I care for .... those whom I dare not ring up until morning and yet must talk to throughout the night."

Besides its lack of plot, "Sleepless Nights" is full of beautiful lyrically introspective writing. The writing is terse, reflective and poetical. The novel has sometimes been compared to a prose poem. It has a stream-of-conscious flow as the narrator recollects and tries to understand her experiences.

The book is at least as much about the people and places important to the narrator as it is about the narrator herself. While Hardwick was known for her ability to be sharp and caustic, the tone of "Sleepless Nights" is mellow and sad. Virtually all the characters experience sorrow and loss. Although there is a great deal of literary allusiveness in the book, the narrator's focus is not on her formidable intellect but is instead on love, sexuality, and attendant loneliness.

Much of the book is about down and out individuals: lonely men in Kentucky who take sexual advantage of the young narrator, prostitutes, bag women, cleaning ladies, and young lonely working women. Other characters include frustrated intellectuals, both male and female, who partake of the New York cocktail scene in the 1940s and 50s. An extended late chapter of the book describes the romantic adventures of a distinguished Dutch physician. The narrator describes a young gay man who was her roommate at Columbia at a sleazy hotel called the Hotel Schuyler, and who explored with her the jazz clubs of 1940s New York. The book includes an extended portrait of Billie Holiday. The narrator says of her:

"Somehow she had retrieved from darkness the miracle of pure style. That was it. Only a fool imagined that it was necessary to love a man, love anyone, love life. Her own people, those around her, feared her. And perhaps even she was ashamed of the heavy weight of her own spirit, one never tempted to the relief of sentimentality."

The scenes of the book shift from the Kentucky of the narrator's youth, to New York City, Maine, Amsterdam, Boston, Connecticut, and elsewhere.

"Sleepless Nights" is a sad, eloquent meditation by person on her life as seen in memory and on transience. Lyricism,reflection, and acceptance of experience, even when unhappy, can bring meaning to life. Hardwick's little book may well be remembered when other louder and longer American novels of the late 20th Century have been forgotten.