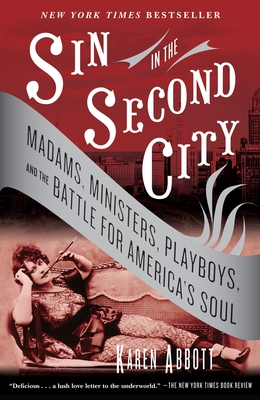 Sin in the Second City: Madams, Ministers, Playboys, and the Battle for America's Soul

Step into the Everleigh Club, the most famous brothel in American history. Culminating in a dramatic last stand between brothel keepers and crusading reformers, this book presents a vivid snapshot of America's journey from Victorian-era propriety to 20th-century modernity. Read More

Step into the Everleigh Club, the most famous brothel in American history. Culminating in a dramatic last stand between brothel keepers and crusading reformers, this book presents a vivid snapshot of America's journey from Victorian-era propriety to 20th-century modernity. Read Less

All Editions of Sin in the Second City: Madams, Ministers, Playboys, and the Battle for America's Soul

The Ghosts of Eden Park: The Bootleg King, the Women Who Pursued Him, and the Murder That Shocked Jazz-Age America

A Most Rebellious Debutante

In the Garden of Beasts: Love, Terror, and an American Family in Hitler's Berlin

Prostitution was rampant in urban America at the turn of the 20th Century with the influx of immigrants from foreign countries and rural areas, poor wages for young working women, and a repressive standard of sexual morality. Many cities had laws declaring prostitution illegal, but in fact they tried to control the spread of the "social evil" by establishing "segregated" areas where the practice was allowed to flourish. Chicago was well-known for its openness to prostitution, and its most notorious segregated area was called the "Levee" on the city's near south side. The Levee was a large, diverse area which included block upon block of "resorts", ranging from small 25 cent "cribs" to posh establishments that catered to the city's elite.

Abbott tells the story of the Everleighs with verve and affection. They maintained a posh resort replete with a gold piano, works of art, heavy carpeted waiting rooms, elegant dinners and beautiful women who were known as "Butterflies". The Everleigh's prided themselves on the way in which they treated their butterflies. The Everleighs disdained the "white slave" traffic and carefully interviewed the young women wishing to work in their resort. The butterflies were free to leave their employment, received regular medical examinations, excellent food, and even some education. They were not whipped or brutalized, as was the case in many other brothels. The butterflies were allowed to see their boyfriends one evening per week if they wished and were encouraged to see themselves and their chosen career with respect. Part of the reason the Everleigh Club was able to succeed on this basis was because it was upscale and expensive, catering only to the wealthiest individuals.

Abbott's book describes the interaction of the Everleigh Club and the sisters with the other inhabitants of the Levee. The Levee depended for its existence on graft and corruption within the Police Department and the political leaders of Chicago's first ward. The Everleigh sisters participated fully in keeping their area safe from the law. Many of the other madams and proprietors of resorts in the Levee were jealous of the success of the Everleigh Club and tried to ruin its business. The lives of the sisters were threatened and on one occasion, a rival madam tried to frame the sisters for murder.

The Levee and the segregated districts attracted the attention of the reformers. A group called the "Purity League" was tireless in its attacks on the Red Light District and a minister named Ernest Bell in 1904 opened a "Midnight Mission" in the Levee. Beginning in 1904, he and his congregation held nightly vigils in front of the Everleigh Club. There was also political pressure that ultimately spelled the doom of the Levee. City and State attorneys became concerned about White Slave Traffic -- the forceful induction of young women into prostitution -- and through their efforts won a series of sensational cases against white slavers. Ultimately their efforts led to the passage of the Mann Act and to the closure of the Everleigh Club and the Levee. Abbott concludes, consistently with most people who have studied the matter, that the extent of "white slavery" was greatly overstated and that the Mann Act, with its loose and vague proscriptions, led to a curtailment of civil liberties far beyond the evil it was designed to correct.

Abbott's book is less a work of historical scholarship than a book which brings a place and an era alive. In its opening chapters, before it gets bogged down with the varied attacks of the Levee, Abbott offers a compelling portrait of a place and an era with all its blemishes and excitements. She introduces, for example, the reader to "Big Matilda" who advertised herself as "Three hundred pounds of black passion: Rates 50c: Three for One Dollar." Abbott shows life in the Levee, including its local newspaper, the annual first ward Ball, the dance halls, and the payoffs. The lively individual scenes include a retelling of the visit of famous African American heavyweight boxer to the Everleigh Club and its unhappy consequences. In a passage late in the book, Minna Everleigh rushes into another brothel to try to rescue a former butterfly from a brutal beating at the hands of another madam. Abbot describes the life of a prostitute named Suzie, who came to the Everleigh Club from another resort and after one day left to marry her customer. For all the interest of many individual moments and the flowing character of some of the writing, the book seemed to me disjointed and hard to follow in places.

The closing of the Levee in 1914 obviously did not mark the end of vice in Chicago. A young and rising Al Capone makes a cameo appearance in Abbott's book. The work of the ministers and the politicians did not end the social evil but merely moved it. Abbott's book is not a detailed study of prostitution, and it is tinged with her reserved but obvious admiration for the Everleigh sisters. The book seems to suggest a return to a carefully limited "segregated" area -- which some cities continue to use -- as a plausible means of controlling prostitution, and its apparent necessity to its customers and practitioners.