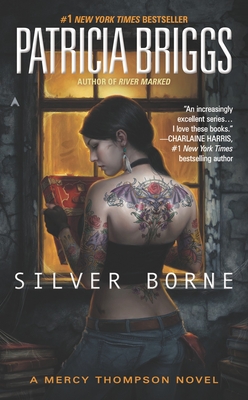 In the new work in the #1 "New York Times"-bestselling urban fantasy series, shapeshifter Mercy Thompson attempts to return a powerful Fae book. But it seems the book contains secret knowledge--and the Fae will do just about anything to keep it out of the wrong hands. Read More

In the new work in the #1 "New York Times"-bestselling urban fantasy series, shapeshifter Mercy Thompson attempts to return a powerful Fae book. But it seems the book contains secret knowledge--and the Fae will do just about anything to keep it out of the wrong hands. Read Less

All Editions of Silver Borne

For a Few Demons More

Good book! i didn´t enjoy it as i did the previous one but it was a fine adition to the lot.
things i´m not happy about are most the same as in the last ones, the author doesn´t seem to notice that the plots are almost the same fae,vampire,wolves same things.
This plot of all seem the most force (since we already deal with the faes before), Sam for me is a strong character if anything his only flaw is the possesiveness (which is natural in any other wolve), and the author depressed me when she makes him look weak, like he surrender to any possibility that i hate the most sicne him and mercy where in the same page in the aspect.
the relationship with adam i seem to finally aprove, and even when i know that what happen with Tim would have traumatize me i didn´t see mercy as the panicky kind of character it was for that independient strength that i grown to like her.
she deals amazingly with the fact that a lot of mememebr in the pack don´t aprove of her, which i respect.
she deals in my opinion amazingly with samuel.
and if it where for the pack part in the book i´m shockingly happy with it i like them all and i have a face for them all (which is to say a lot i only make faces when i´m intrigued,happy or atached to a character), though i don´t get how after what does 3 members did Adam and everyone else just cope with it and move on.
I really hate how the author resolves samuel problem so easily it all seemed fake for me. I just don´t see ariana as a good prospect and that no one notices is stupid, feels poorly deliver and force, if samuel care for this character he would have talk about her in one of the books for one and then samuel have fight so much for mercy and he donñt love her, why didnñ´t he did the sajme for the woman he did love? and how come he always say badly of fae people if he himself love one? how come he didn´t apreciate mercy enough to tell her he was in loves? how come suddenly he is a submissive wolve? all this questions are why i can´t feel good about this book.
it could have been better but the plots seem to overseen and she destroy the escence that make me like a lot of the charcters (Samuel and Sam)