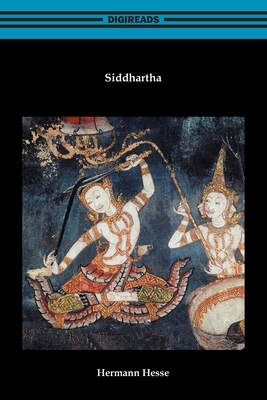 Told in a simple mythical style, the story of Siddhartha is an inspirational classic by Hermann Hesse, winner of the Nobel Prize for Literature. Part of the Macmillan Collector's Library, a series of stunning, clothbound, pocket-sized classics with gold-foiled edges and ribbon markers. These beautiful books make perfect gifts or a treat for any book lover. This edition is translated from German by Hilda Rosner with an introduction by John Peacock. Siddhartha, the son of a wealthy Brahmin, is unable to find peace within ... Read More

Told in a simple mythical style, the story of Siddhartha is an inspirational classic by Hermann Hesse, winner of the Nobel Prize for Literature. Part of the Macmillan Collector's Library, a series of stunning, clothbound, pocket-sized classics with gold-foiled edges and ribbon markers. These beautiful books make perfect gifts or a treat for any book lover. This edition is translated from German by Hilda Rosner with an introduction by John Peacock. Siddhartha, the son of a wealthy Brahmin, is unable to find peace within his own religion and community so sets off on his travels through India in search of enlightenment. First he spends time with a group of ascetics called Samanas. For a while he embraces their doctrine and rejects all worldly goods. When he hears about a man called Gotama the Buddha he leaves the Samanas. However Buddhist teaching disappoints him and he realizes that self-discovery must come from his own experiences. He rejects the spiritual life, takes a lover and becomes a rich merchant. But after some years, dissatisfied with materialism, he takes off again in search of the spiritual peace he longs for. Read Less

All Editions of Siddhartha

This review is not of Hesse's Siddhartha per se, but of the uncredited English translation shown above. I read Siddhartha for the first time in English some decades ago and have read other works by Hesse recently. This translation loses that author's voice more than most translations I've read. This is one of those newly printed editions, with the translator uncredited--with good reason. It is a mediocre translation from German. For anyone interested in this wonderful tale, I recommend finding a credible translation, not this one, which appears to be the equivalent of an open source collaboration now put into print.

Rereading Siddhartha After Many Years

I read Herman Hesse's short novel "Siddhartha" in high school, as many people of my generation did and as many young people still do. I remember being deeply moved by the book and going on to read more of Hesse over several years. Then, I put Hesse aside for a long time. Even though I grew seriously interested in Buddhism some years ago, I was not moved to revisit "Siddhartha" or Hesse.

After rereading "Narcissus and Goldmund", I returned at last to "Siddhartha". It is difficult to recapture feelings from many years ago, but I was moved again by Hesse's book but probably saw it differently than I did when I was young. Although the book appeals primarily to young readers, something is to be gained by reading it late in life. The book has deservedly become famous and will at any age reward reading.

Hesse's novel tells the story of the title character from his youth through old age. Siddhartha is the child of a well-to-do Brahmin and is a gifted student with a good friend, Govinda. As an adolescent, Siddhartha experiences spiritual discontent and to the chagrin of his father joins an ascetic sect, the Samanas, which wander the forest practicing self-mortification. After some years, Siddhartha again realizes he is dissatisfied. He and Govinda, who has joined him, go to hear the teachings of the Buddha. Govinda becomes a follower but Siddhartha, after a conversation with the Buddha, wanders on his way looking for experiences rather than teachings. After crossing a river through a mysterious ferryman, Siddhartha comes to a town, meets and becomes enamored of a beautiful courtesan, Kamala, and ultimately becomes rich, successful, and Kamala's lover. Siddhartha again comes to feel the emptiness of this life and wanders off where he meets the old ferryman and, with guidance from the ferryman and from the river, spends the rest of his life ferrying people over the river and attains peace and contentment at last.

Young people probably read "Siddhartha" because of the protagonist's search for meaning in life which begins in youth. Reading at later in life, one might think more about Siddhartha's old age. It might be tempting to suppose that Siddhartha rejected the materialism and sensuality he adopted in the middle years of his life, but that is not the case. It seems to me that the elderly Siddhartha accepted his activities and experiences during these years and saw them as continuous with his life as part of a timeless whole. So too, some might refer to Siddhartha's search as involving in recent jargon "finding oneself" but Siddhartha seeks to lose the sense of a separate self and to try to see reality whole.

Instead of the rejection of American society of the counter-culture of my youth, Siddhartha finds an acceptance of himself, of others, and of the culture in which he lives. He says at one point that the difference between the wise and other people is that the former avoid taking the part for the whole, and even that insight can be overdone. Although Siddhartha comes to believe in the inadequacy of words and concepts to express full reality, he tries to explain his insights several times in the latter part of the book. When he meets again his old friend Govinda who has become a faithful disciple of the Buddha, Siddhartha struggles to explain what he has learned.

"[I]t seems to me that everything that exists is good -- death as well as life , sin as well as holiness, wisdom as well as folly. Everything is necessary, everything needs only my agreement, my assent, my loving understanding; then all is well with me and nothing can harm me. I learned through my body and soul that it was necessary for me to sin, that I needed lust, that I had to strive for property and experience nausea and the depths of despair in order to learn not to resist them, in order to love the world, and no longer compare it with some kind of desired imaginary world, some imaginary vision of perfection, but to leave it as it is, to love it and be glad to belong to it."

There is a sense of understanding of one's life and of a love and acceptance of reality as a whole and -- more concretely -- of the society in which one lives -- that becomes an important part of Siddhartha's wisdom. Parts of this understanding may not be apparent to young readers who love Hesse's novel or, indeed, to other readers stung with a sense of social criticism, as was the case in late 1960s America and as remains the case today. Something is to be learned from a spiritual vision that might have escaped youthful readers.

Hesse is a fine writer and I have enjoyed his Steppenwolf since my college reading many years ago. Siddharta is a fine introduction to
the Buddha's life and philosophy. It was an excellent read after I completed my course on Buddhism (by The Great Courses set of DVDs)
A wonderful way to get the feeling of this religion in any comparative study of the 5 great religions.

Read this and loved it. Bought it on a suggestion from a friend and I couldn't put it down. This is a book that will forever stay in my collection.

An eloquently written book about the spiritual journey.