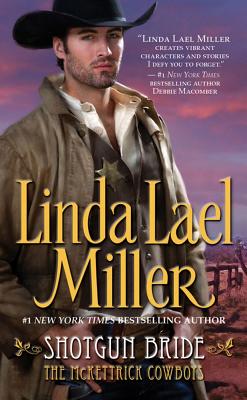 In the second novel of Miller's McKettrick Cowboys trilogy, local marshal Kade McKettrick must choose between five mail-order brides who are all willing to produce an heir that will win him his father's ranch. But only one special lady steals his heart. Original. Read More

In the second novel of Miller's McKettrick Cowboys trilogy, local marshal Kade McKettrick must choose between five mail-order brides who are all willing to produce an heir that will win him his father's ranch. But only one special lady steals his heart. Original. Read Less

All Editions of Shotgun Bride

A Snow Country Christmas: An Anthology

As Good as the First Book - For Different Reasons:

One of the great things about this book (second in the series) is that all the previous characters are back. In the first book, Rafe married; this is Kade?s story.

Most of the problems Kade will face are already in Indian Rock ? there are three concerns. (1) A range war is brewing between the Triple M Ranch and the Circle C. If it isn?t stopped soon, all-out war will begin and pull in the townspeople and other ranchers.

(2) Sister Mandy, from the first story, is working at the Arizona Hotel. Kade is sure she is not a nun; but who is she? Near the back door, he sees a strange man delay Sister Mandy and she looks afraid. After getting Sister Mandy from the older man, she still refuses to talk about her previous life. Kade knows the woman is dressing as a nun for a disguise. But why?

(3) Six mail-order brides have arrived in town, ready to marry Kade ? or any other available McKettrick. Kade is horrified and looking for cover. The ladies are unwilling to leave town until he selects one for his bride.

And these three issues aren?t Kade?s biggest problem! This book gives Kade the opportunity to show his leadership qualities. As one of the wealthy McKettrick?s he?d never considered the other folks in town. Suddenly, he learns that the McKettricks aren?t considered to be the noble men that they (the McKettricks) think they are.

This is an interesting book; the McKettricks and the women involved with them are changing. They adapt to their circumstances. Miller has spent considerable time developing these characters and the reader has a firm understanding of what makes each person tick.

I rated this book ?5? because a whole range of complex emotions and motives are part of this story. This isn?t a light romance; people die ? sometimes in gruesome ways. The McKettrick?s are faced with failure of their ranch; the animosity between the 3 brothers and the half-brother is still simmering just below a boil. This is an action-packed story with lots of nuances. Enjoy!

I loved the continuation in this book from the previous one. Keeps you up to date with the first couple and gives you a great love story!