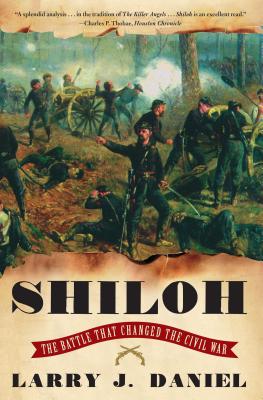 Shiloh: The Battle That Changed the Civil War

A brilliant reexamination of one of the bloodiest and most crucial battles of the Civil War, "Shiloh" presents the story of that fascinating enigma of American history, Ulysses S. Grant, who, at Shiloh, showed himself at his best--and worst--winning by sheer dogged grit. 24 photos. Maps. Read More

A brilliant reexamination of one of the bloodiest and most crucial battles of the Civil War, "Shiloh" presents the story of that fascinating enigma of American history, Ulysses S. Grant, who, at Shiloh, showed himself at his best--and worst--winning by sheer dogged grit. 24 photos. Maps. Read Less

All Editions of Shiloh: The Battle That Changed the Civil War

Soldiering in the Army of Tennessee: A Portrait of Life in a Confederate Army

Cannoneers in Gray: The Field Artillery of the Army of Tennessee, 1861-1865

Cannoneers in Gray: The Field Artillery of the Army of Tennessee

This Terrible Sound: The Battle of Chickamauga

A Study Of Shiloh

Students of the Civil War have long recognized the importance of the battles in the West to the outcome of the conflict. The early stages of the war in the West, the battles of Fort Henry, Fort Donelson, and Shiloh were critical to the ultimate outcome.

Larry Daniel's "Shiloh: The Battle that Changed the Civil War" offers a detailed account of the bloody conflict that took place April 6-7, 1862 at Pittsburgh Landing in Tennessee. But the strength of the book lies more in Daniel's attempt to put the battle in its political context than in his description of the military actions.

Daniel argues that Jefferson Davis's policy in the West, which required a defence of every part of the Confederacy's large border, was based on highly dubious assumptions on how to garner support for the Southern war effort from European powers. Albert Sidney Johnston, a highly regarded general and a friend of Davis, received the unenviable task of commanding the Southern forces in the Western theatre. Militarily, Davis's policy stretched the Confederacy's available manpower very thin and made a breakthrough almost inevitable. Following the disaster at Fort Donelson, the way was opened into the Confederacy's heartland in Tennessee and further South including, ultimately, the control of the Mississippi River.

Johnstson, under severe criticism for the loss of Fort Donelson, was forced to evacuate Nashville. An ailing P.T. Beauregard was sent to assist Johnston and, it seems, Johnston allowed his junior to make many of the command decisions. Ultimately the Confederate troops concentrated in Corinth, Mississippi where the launched the surprise attack at Shiloh.

The Union forces had their own difficulties with a divided command structure, a great deal of personal jealousy and animosity among the generals, and suspicion of U.S. Grant. Grant ultimately sent his army to Pittsburg Landing with orders to wait until General Buell could join him before pushing South. The position was left unfortified and Grant did not expect a battle even though he knew the Confederates were only some 23 miles away.

Johnston and Beauregard hoped to launch their surprise attack on April 5 but difficulties in the march required its postponement until Sunday, April 6. Beauregard did not want to attack on April 6, but Johnston, at that point, pushed the action forward. The result was a grueling and bloody battle, full of missteps by commanders of both sides and fought largely by inexperienced troops. Johnston, leading his troops from the front, was killed on the right side of the Southern line at about 2:30 p.m. on April 6. Beauregard called off the attack at about 5:30 p.m., probably a correct decision but one that has been questioned by many. It is difficult to say whether the South could have, with a better battle plan, more troops, and firmer execution, prevailed on April 6 (or on April 5 if the attack had been brought as scheduled) in its bold gamble. But, reinforced by Buell, the Union drove the Confederacy back on April 7.

Grant himself said that Shiloh was the most misunderstood action of the Civil War. Shiloh is highly confusing in large part because the South's initial plan of attack broke down in short order and the battle became a series of uncoordinated engagements. Daniel's book compounds the confusion of the battle, as he writes in short overly-detailed sections without attempting to give an overview of the action. His account will likely be overwhelming to a reader coming to the battle for the first time. The maps in the book are widely spaced, and I didn't find them useful in understanding the text or the action on the field. I have been intrigued by the battle of Shiloh for many years. I read this book early in my study -- prior to a visit to Shiloh -- and then returned to it recently. I still found it difficult and frequently opaque.

Daniel's account makes a compelling case for the significance of Shiloh and he gives excellent accounts of many of the leaders involved in the battle, including Johnston, Beauregard, Grant, Sherman, Halleck, and Buell together with some figures whose names are not well-known. But readers wanting a basic account of the elements of a highly complex battle might be advised to start elsewhere.

Very detailed account of this battle, what led up to it, and why it happened. Lots of quotes by participants, enough maps to help immensely. Highly recommended.