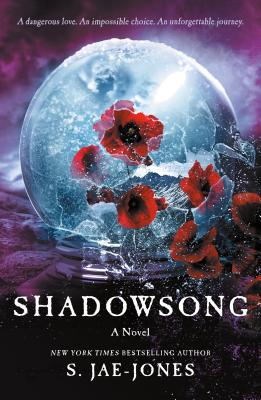 Six months after the end of Wintersong, Liesl is working toward furthering both her brother's and her own musical careers. Although she is determined to look forward and not behind, life in the world above is not as easy as Liesl had hoped. Her younger brother Josef is cold, distant, and withdrawn, while Liesl can't forget the austere young man she left beneath the earth, and the music he inspired in her. When troubling signs arise that the barrier between worlds is crumbling, Liesl must return to the Underground to unravel ... Read More

Six months after the end of Wintersong, Liesl is working toward furthering both her brother's and her own musical careers. Although she is determined to look forward and not behind, life in the world above is not as easy as Liesl had hoped. Her younger brother Josef is cold, distant, and withdrawn, while Liesl can't forget the austere young man she left beneath the earth, and the music he inspired in her. When troubling signs arise that the barrier between worlds is crumbling, Liesl must return to the Underground to unravel the mystery of life, death, and the Goblin King-who he was, who he is, and who he will be. What will it take to break the old laws once and for all? What is the true meaning of sacrifice when the fate of the world-or the ones Liesl loves-is in her hands? Read Less

Stars Above: A Lunar Chronicles Collection

Letters to the Lost

This sequel is probably not what you are expecting

I received a copy of this book via Netgalley in exchange for an honest review. Thank you!

For anyone who has read (and loved...or disliked) Wintersong, be prepared, because this sequel is probably not what you are expecting. But trust me, if you allow yourself the opportunity, this book can sweep you away in a storm of folklore, complexity, and utter lyrical beauty all on its own.

Just as I had written in my review for Wintersong, the writing in Shadowsong has a way of making me feel raw. These characters, Liesl, Josef, Kathe, the Goblin King, are utterly stripped of their complexity and bared for the entire world to see their soul. The writing quality has surpassed my expectations in this series and made me appreciate Jae-Jones as an author immensely. What I appreciate most is the risk she took to also bare her own soul within these characters.

"Madness is a strange word. It encompasses any sort of behavior or thought pattern that deviates from the norm, not just mental illness. I, like Liesl, am a functioning member of society, but our mental illnesses make us mad. They make us arrogant, moody, selfish, and reckless, They make us destructive, to both ourselves and to those we love. We are not easy to love, Liesl and I, and I did not want to face that ugly truth."

In the author note, she also noted that there is content such as: self-harm, addiction, reckless behavior, and suicide ideation. These traits are shared among several members of the cast.

"How can I go on when I am haunted by ghosts? I feel him, Sepp. I feel the Goblin King when I play, when I work on the Wedding Night Sonata. The touch of his hand upon my hair. The press of his lips against my cheek. The sound of his voice, whispering my name. There is madness in our bloodline."

Despite this fact, I think this was a wonderful read. I was utterly surprised by the complexity of this duology. From what I gathered in Wintersong, I did not foresee the path in which this plot would traverse. Shadowsong is a mix of retellings between Goblin Market, the story of Hades and Persephone, and the Wild Hunt. Majority of the time, the plot walks a narrow path, dipping toes in both the fantastical and reality, obscuring which is which. I believe the way in which this book is written is figurative to Liesl's experience as a character. Her constant battle between living in the "real world," yet, being enticed by the underground and back to her beloved is palpable.

"I who had grown up with my grandmother's stories, I who had been the Goblin King's bride and walked away knew better than anyone the consequences of crossing the old laws that governed life and death. What was real and what was false was as unreliable as memory, and I lived in the in-between spaces, between the pretty lie and the ugly truth. But I did not speak of it. Could not speak of it."

Liesl's fears and deliberations are not without merit. She knows, along with those that still hold to the Old Laws, that there are consequences for each and every action. The Old Laws must be appeased. By thwarting them, the Wild Hunt occurs, seeking souls to balance the scales. As the threat draws nearer, Liesl grows more erratic in her deliberations, trying to protect her sister Kathe, repair her relationship with her brother Josef, and learn to live with herself and accept who she is. Acceptance proves to be a main theme throughout this story. Each character struggles with acceptance of a certain truth in their life, but instead, try to ignore it by

"I was so focused on being Elisabeth, alone, I had not thought about what it meant to be Elisabeth, entire. And that meant embracing my past as well as uncertain future. I was so determined to not wallow in my misery that I made myself lonely; I pushed away memories and feelings and connections not only to the Goblin King, but myself. I had mourned, but I had not let myself grieve. I had not let myself feel. Don't think. Feel."

While I wish there had been more appearances from the Goblin King himself, I'm glad there wasn't. I think that after Liesl's experience in the underground required this sort of backlash in her character. Her transformation from the Goblin Queen back to Liesl required addressing. No matter how "romantic" her experience in the underground may have been, (although, it was definitely twisted) Liesl experienced much that required more attention. It is in Shadowsong where Liesl truly becomes a woman and owns each part of herself--whole and broken. That is the beauty of this story--learning to accept that we all have attributes, experiences, memories, and influences that make and break our character. It's how we deal with those points that define who we are. I couldn't help but feel forced to look inward and evaluate parts of myself I wished to ignore while traversing these pages. It also forced me to consider others and observing these same qualities that makeup people around me.

"Who are you?" I whisper. He nods at me. You know who I am, Elisabeth. "You are the man with music in his soul," I tell him. "You are the one who showed me a way to myself when I was lost in the woods. My teacher, my playmate, my friend." I choke a little on the sobs rising from my throat. "You allowed me to forgive myself for being imperfect. For being a sinner. For being me." If my brother is my grace, then the Goblin King is my mercy.

As I said in my review of Wintersong, this book may not resonate with everyone. In fact, I'm certain it won't. It's not the typical YA/NA fantasy for today's era, and I'm so glad that it's not. It has potential to truly challenge its reader and forces them to evaluate more than just a fun, light-hearted plot with a shallow romance. No, Shadowsong has a lot to offer.

Vulgarity: Minimal! I only counted 3 words!
Sexual Content: Unlike Wintersong, there is very little regarding this area in this book. While Liesl does think about her times with the Goblin King, she doesn't go into explicit detail.
Violence: Moderate. Due to the nature and tone of this book, there are definitely some points (including the content warning listed by the author) that are not light topics for discussion. I still believe this is a New Adult Fantasy, and not quite appropriate for Young Adult readers.