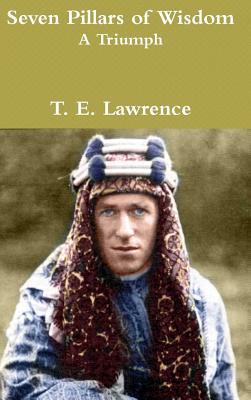 Seven Pillars of Wisdom: A Triumph

Seven Pillars of Wisdom is the monumental work that assured T.E. Lawrence's place in history as "Lawrence of Arabia". Not only a consummate military history, but also a colorful epic and a lyrical exploration of the mind of a great man, this is one of the indisputable classics of 20th century English literature. Line drawings throughout. Read More

Seven Pillars of Wisdom is the monumental work that assured T.E. Lawrence's place in history as "Lawrence of Arabia". Not only a consummate military history, but also a colorful epic and a lyrical exploration of the mind of a great man, this is one of the indisputable classics of 20th century English literature. Line drawings throughout. Read Less

All Editions of Seven Pillars of Wisdom: A Triumph

The Seven Pillars of Wisdom

The Diary Kept by T. E. Lawrence While Travelling in Arabia During 1911

From Beirut to Jerusalem

The Guns of August

With Lawrence in Arabia

not for reading at the beach

A serious auto-biographical look at a world gone by from 1916 to 1918 by an archeologist turned soldier and full of detailed and well-written accounts of people and events at that time. Lawrence was a gifted writer. Like the title says this book is a triumph.

I've read this book before and have always loved reading T.E. Lawrence's writings. His descriptions can be a bit technical and anthropological, but his descriptions of culture, environment, and place can transcend time and put you there if you let it.

One must love history and have interest in the Middle East during the campaigns of WWI to appreciate this writing. Lawrence of Arabia was articulate, intelligent and is a great historical romantic figure.

I am absolutely delighted with this copy of one of the great works of English literature. It is a 1935 edition which contains not only illustrations and maps, but also excerpts of correspondence between Thomas E. Lawrence (hadn't know his name was Thomas until I got this copy) and his publisher which shows his great sense of humor.

If you can get a copy of this edition, do so while there are still some available.

'Seven Pillars...' is not just beautifully written (though that alone would be sufficient incentive to read it) - it traces the source of the soured relations between Europe and the Arab world following the Great War. Indeed, this tale of recruitment, arming and training of irregulars and their subsequent betrayal by foreign sponsors would be distastefully familiar subject matter for any observer of events of the 20th and early 21st centuries in the near and middle East. The promise of nationhood and self-determination to enlist help against a common enemy was dangled before the Arab peoples: a recognisable modus operandi, latterly to be visited time and again upon the restless and desperate.

Lawrence was "continually and bitterly ashamed" of the betrayal of the Bedouin, whose fierce loyalty and independence of spirit he clearly admired. It is sad, in many ways, that a similar vein of conscience is so signally absent from the characters who have latterly dabbled in the politics of the "Levant" - especially since, unlike Lawrence, they held the power to desist from their course.

This is in many respects a period-piece, and some of the author's attitudes may jar on a 21st century reader: however, the man was writing in and of his time, and to this reader at least, the integrity of his intent remains quite credible. I heartily recommend this book.