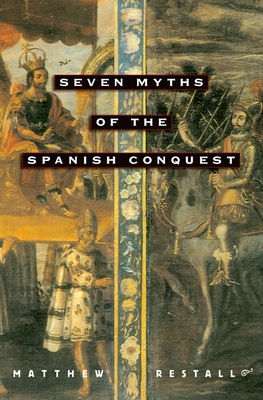 Seven Myths of the Spanish Conquest

In this intriguing book, a professor of Latin American History uses a wide array of sources to take a provocative look at the distorted history of the Spanish Conquest. 11 halftones. Read More

In this intriguing book, a professor of Latin American History uses a wide array of sources to take a provocative look at the distorted history of the Spanish Conquest. 11 halftones. Read Less

All Editions of Seven Myths of the Spanish Conquest

When Montezuma Met Cortes: The True Story of the Meeting that Changed History

The Women of Colonial Latin America

Mexico and the Spanish Conquest

by Professor Mark A Burkholder

Restall's book, "Seven myths of the Spanish Conquest," is very useful in getting rid of all the pseudo-scholarly ideas about the conquest of Mexico by the Spaniards. I grew up in that country and found the Conquest as presented in a conservative school system incomprehensible.
Many years down the road I began to collect books and try to make sense out of this historical fact. Restall's book was a brightly burning light as he exploded myth after myth. Cortés as the exceptional man (my reading of history classified him as an extraordinarly manipulative man and one lacking both conscious and consistency.)
Restall explains Cortés deeds in such a way that they make sense in the greater historical context. He proceeds to explode the myth of the King's Army (Conquistadores), the "White" conquistador (somehow white skin makes one better or maybe a god?)
The myth of completion... no, the Conquest did not take place in two years... the Mayab and northern mexico were not conquered until the 1800 and 1930 respectively (that's the Nayares for those who wonder), and the myth of Malinche as a communicator or mis-communicator.
With the help of this book I came to a much better understanding of the mechanisms and the importance and lack thereof of the many players in the conquest.