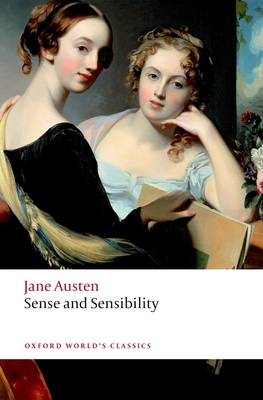 "Sense and Sensibility" is famously characterised as the story of two Dashwood sisters who embody the conflict between the oppressive nature of 'civilised' society and the human desire for romantic passion. However, there is far more to this story of two daughters made homeless by the death of their father. Elinor, 19, and Marianne, 17, initially project the opposing roles with Elinor cautious and unassuming about romantic matters, while Marianne is wild and passionate when she falls hopelessly in love with the libertine Mr ... Read More

"Sense and Sensibility" is famously characterised as the story of two Dashwood sisters who embody the conflict between the oppressive nature of 'civilised' society and the human desire for romantic passion. However, there is far more to this story of two daughters made homeless by the death of their father. Elinor, 19, and Marianne, 17, initially project the opposing roles with Elinor cautious and unassuming about romantic matters, while Marianne is wild and passionate when she falls hopelessly in love with the libertine Mr Willoughby. But the lessons in love and life see the two characters develop and change with sense and sensibility needing to be compromised as a matter of survival.Written when Austen was just nineteen, this story has been read as a biographical reflection of her relationship with her own sister Cassandra, with the younger Jane being the victim of 'sensibility.' However, the novel is far more than a simple case of passion versus manners, and depicts the romantic complications of two women made highly vulnerable by the loss of their father and estate. With a raw and intense quality Austen creates a romantic masterpiece on the backdrop of a fragile social context. Read Less

All Editions of Sense and Sensibility

A Sort of Book Review

After watching Emma Thompson's movie and realizing I had never read the book, I ordered a copy of Jane Austen's Sense and Sensibility. I have no intention of reviewing or critiquing or even praising Jane Austen's masterpiece-it certainly needs no pat on the back from me-but I was so impressed by the edition I got that I do want to review that.
The internet has replaced the independent corner bookstore for many people, and while I find that a lamentable thing generally, I have to admit it is a boon for those of us who live out in the boonies. Looking for a copy of Sense and Sensibility, I mulled over the many possibilities on the market (new, used, collectible, rare, hardbound, paperback, and many further permutations within each of those categories), and being an inquisitive type who enjoys learning, I decided to get an annotated edition. I selected one edited by Patricia Meyer Spacks of the University of Virginia, and published by the Belknap Press of Harvard University.
I don't know exactly what I thought I might be getting, but it certainly wasn't this. For one thing, the book is very large by today's standards, ten inches high by almost ten inches wide. To call it a hardbound book is understating the thing considerably: it is hardbound the way books used to be hardbound a century ago and the way all good books worth keeping ought to be bound today, which is to say it is bound to last and endure, with heavy cloth covers and real, honest-to-God stitching. It has subtly watermarked endpapers (if I get some of the terminology wrong, forgive me: I am not a bookbinder) and the pages themselves are of heavy and durable bond paper. Even the dust jacket is heavier and more substantial than on any book I have seen for many a long day.
The volume is profusely and magnificently illustrated with, primarily, appropriate contemporary art (think William Blake, Sir David Wilkie, Sir Joshua Reynolds, George Stubbs, a watercolor of Jane Austen by her sister Cassandra, some of the illustrations done for early editions, that sort of thing) all of it carefully chosen to illuminate either references in the original text or commentary by Ms. Spacks.
And Ms. Spacks knows her stuff! Much of the effect of Jane Austen's writing relies on her observations of the habits and customs of her day, and sometimes there were subtleties of behavior in 1800 that no longer exist. As an example, when Lucy Steele tells poor Elinor that she, Miss Steele, is engaged to Edward Ferrars, Elinor is able to cling to disbelief until the moment Lucy Steele shows her a letter written by Edward to Miss Steele. It is not the content of the letter that is of any importance-in fact, we never learn the content-it is the fact of the letter that is so momentous, because in those days a gentleman simply did not, could not, write a letter to a young lady unless he intended to marry her. It is that kind of subtlety I might have missed, but for Ms. Spacks.
Another reason to get this annotated edition is because language is a mutable and constantly evolving thing, and words are used in different ways to mean different things today than they were two-hundred years ago. I admit that I'm at least as arrogant as the next fellow: I flatter myself that I am reasonably well-read; I rarely have to look up a word or an unusual usage of a word when reading Shakespeare, say; and I certainly didn't expect to learn as much as I have from Ms. Spacks' commentary. To take the most obvious example, both the words "sense" and "sensibility" had slightly different and far more complex implications of meaning than we are used to, differences that have a profound influence on how we understand what Miss Austen was saying.
Finally, I'd like to compliment Emma Thompson. As Ms. Spacks points out in her commentary (quoting an earlier critic of Jane Austen), Edward Ferrars is probably the weakest character in Sense and Sensibility. The reader must believe that Elinor loves him, but because Austen has used the plot device of Edward's engagement to Lucy Steele that causes him to be depressed and dispirited, the result is that Edward is unable to reveal his real persona to Elinor and so becomes a sort of pale watercolor of a figure, with the result that the reader is left a little confused as to why Elinor loves him to the exclusion of all other possible men. In her movie version, Emma Thompson very cleverly solved this problem in part by casting the offensively handsome and charming Hugh Grant as Edward, and also by showing Edward interacting with the youngest sister, Margaret, in ways that make him very appealing. (Elinor catches him discreetly pushing a large atlas under the table where Margaret is hiding from her mother; he subsequently starts a lovely piece of nonsensical conversation with Elinor about the source of the Nile-"I think it's in Belgium."-to finally draw the little girl out from her hiding place; he sends the atlas to her later as a gift; a wonderful scene where he is observed by Elinor fencing with Margaret, using wooden swords, and losing badly.) I normally quake at rewrites of masterpieces (I believe it was the 1935 version of A Midsummer Night's Dream that famously included the credit, "additional dialogue by...") as being the result of the febrile arrogance of fools, but in this case, Ms. Thompson was exactly right (or write, take your pick). She identified a problem, and provided a charming and graceful remedy.
If you love Jane Austen, buy this book. Hell, even if you don't, go ahead and buy this book. The illustrations alone are worth it.

Of all Austen's works, this one improved most on long acquaintance.

I remember liking it less than the others when I read it for - I thought - the first time, was surprised to find something I'd written about it some years earlier.

So it made no impression on the first reading, and little (for an Austen) on the 2nd. I was more like passionate Marianne than like restrained Elinor, but Marianne's relentless seriousness made her hard to relate to also.

The heroes' characters really are less developed than Austen's others - frankly, I was never able to make much of Edward until Hugh Grant played him. And Colonel Brandon seemed old and dull to me.

On subsequent readings, I more heartily admired Elinor's unglamorous virtues, felt greater compassion for foolish Marianne, and relished the girls' sound matches.The intervening years had taught me the importance of weighing character over other qualities in potential mates, and the benefits of impulse control.

After an easier sell (Pride & Prejudice or Emma) gives them a taste for Austen, passionate young ladies should read Sense and Sensibility - perhaps at least three times before embarking on love lives. You never know, it could help.

Sense and Sensibility is a gentle book about people and relationships, about lies and class bigotry, about people and how to recognize the "right one" when you meet her/him. You won't find thrilling action scenes with dragons and wizards or orcs and trolls. What you will find is a thoroughly engaging and witty group of genteel people to whom life and circumstance has dealt a series of severe, but not unsurvivable blows. The ending is satisfyingly happy with all the right people getting together.

Only four stars, because the language and manners are formal and "olde" enough to seem stilted at first, but if you will give yourself a chance, I think you will come to enjoy the book very much.

If you enjoyed Pride and Prejudice- you're find Sense and Sensability just as entertaining.