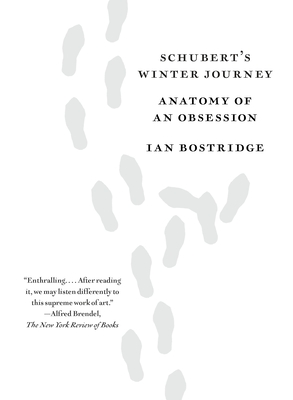 Franz Schubert's Winterreise is at the same time one of the most powerful and one of the most enigmatic masterpieces in Western culture. In his new book, Schubert's Winter Journey: Anatomy of an Obsession, Ian Bostridge - one of the work's finest interpreters - focusses on the context, resonance and personal significance of a work which is possibly the greatest landmark in the history of Lieder. Drawing equally on his vast experience of performing this work (he has performed it more than a hundred times), on his musical ... Read More

Franz Schubert's Winterreise is at the same time one of the most powerful and one of the most enigmatic masterpieces in Western culture. In his new book, Schubert's Winter Journey: Anatomy of an Obsession, Ian Bostridge - one of the work's finest interpreters - focusses on the context, resonance and personal significance of a work which is possibly the greatest landmark in the history of Lieder. Drawing equally on his vast experience of performing this work (he has performed it more than a hundred times), on his musical knowledge and on his training as a scholar, Bostridge unpicks the enigmas and subtle meaning of each of the twenty-four songs to explore for us the world Schubert inhabited, bringing the work and its world alive for connoisseurs and new listeners alike. Originally intended to be sung to an intimate gathering, performances ofWinterreise now pack the greatest concert halls around the world. Though not strictly a biography of Schubert, Schubert's Winter Journey succeeds in offering an unparalleled insight into the mind and work of the great composer. 'Usually great singers cannot explain what they do. Ian Bostridge can. Whether or not you know Schubert's 'Winter Journey', the book is gripping because it explains, in probing, simple words, how a doomed love is transformed into art.' Richard Sennett Read Less

All Editions of Schubert's Winter Journey: Anatomy of an Obsession

A Primer for Forgetting: Getting Past the Past

Walt Whitman Speaks: His Final Thoughts on Life, Writing, Spirituality, and the Promise of America

The World of Yesterday

Exploring Winterreise With A Singer-Scholar

Schubert's song cycle Winterreise is one of the essential works of classical music and a work I have loved for many years. I respond to this cycle of lost love whenever I return to it. Written in the last year of Schubert's life, Winterreise is a setting for solo voice and piano of 24 poems by Wilhelm Muller. Schubert first set a group of twelve poems and, shortly thereafter returned to set the entire cycle of 24 songs. The cycle has been recorded and performed innumerable times.

The British tenor Ian Bostridge has performed Winterreise over 100 times in a thirty year career. He has recorded the work with pianist Leif Ove Adnes and prepared a dramatization of the cycle with pianist Julius Drake. Bostridge does not have an academic degree in music. He received a doctoral degree from Oxford in 1990 for a dissertation on witchcraft in English life from 1650 -- 1750 and taught political theory and British history at the university level before devoting himself to a career as a singer in 1996.

Bostridge's love for Schubert's Winterreise and his passion for music and for learning all are on full display in his book, "Schubert's Winter's Journey: Anatomy of an Obsession." The obsession in question is shared by Muller and Schubert's nameless wanderer in the cycle, by Bostridge himself, and by the reader of the book and listener to the music. In a brief introduction, Bostridge writes: 'It is surely remarkable that the piece lives and makes an impact in concert halls all over the world, in cultures remote from its origins in 1820s Vienna." He says of his goal in the book:

"I want to use each song as a platform for exploring these origins; setting the piece in its historical context, but also finding new and unexpected connections, both contemporary and long dead -- literary, visual, psychological, scientific, and political. Musical analysis will inevitably play its part, but this is nothing as systematic as a guide to Winter Journey, or which there are plenty already out there."

The book consists of 24 chapters of varying lengths each of which explores one of the songs in Winterreise. Each chapter begins with the German text of the song with Bostridge's own translation on a facing page. From that point, the chapters move in wildly varying directions. Often Bostridge begins with a short musical or textual discussion. But he uses each song as a springboard for a wide-ranging discussion about Schubert's and Muller's lives, politics in Vienna in the years following the Napoleonic wars, the Enlightenment, art, religion, literature, science, and much more. The book displays a prodigious learning and presents it well. Often, the book moves from subject to subject in a chain of free association. The discussion moves freely from sources and references predating Schubert, to politics, science, and such during his lifetime, through the latter 19th Century and to the present. It is dazzling. I also found it highly useful in gaining understanding of Winterreise even when I thought some of the themes, such as the cycle's covert political message, were overstated. At times, the associations go far afield and become "tangential" to Winterreise, as Bostridge notes. But the book is absorbing and infused with love and learning about its subject. The purely musical discussions tend to be brief. But Bostridge draws excellent parallels between particular songs in Winterreise and other parts of Schubert's output. For example, his discussion of "Einsamkeit" (loneliness), no. 12 in the cycle, discusses many other songs of Schubert with loneliness as a theme. The discussion of Mut (courage), no. 22 in Winterreise, discusses the state of religious belief in Schubert's Vienna and the treatment of religious themes in the composer's songs, masses, and other music.

The book uses art extensively and includes many full-color illustrations of works bearing upon the songs and themes of Winterreise. Bostridge's discussions are invariably illuminating. The book has an extensive bibliography but no index.

I accompanied my reading by listening to a recording of Winterreise. From several versions that I own, I chose a famous 1942 recording by baritone/bass Hans Hotter and pianist Michael Raucheisen. I began by listening to each song after reading the chapter Bostridge devoted to it in his book. Somewhat beyond the middle of the cycle, this approach became too cumbersome and distracting, and I listened to the songs in groups of two or three. Bostridge in fact discusses the Hotter/Raucheisen recording when he explores the Nazi's use of Winterreise during WW II. During the middle of the War, Raucheisen, whom Bostridge describes as "Goebbel's client and Hitler's favorite" had projected a complete account on record of German songs as part of the war effort. Bostridge tries to understand the appeal German romanticism and Winterreise held for the Nazis. I was disconcerted to learn the background of the recording I selected, much as I love its way with the music. I am also listening to the Bostridge/Drake dramatization of Winterreise which is readily accessible on media.

I learned much about Schubert and Winterreise from Bostridge. This book will appeal to readers who already love or who want to get to know Schubert's great song cycle.