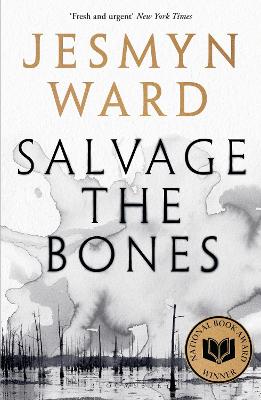 A hurricane is building over the Gulf of Mexico, threatening the coastal town of Bois Sauvage, Mississippi, and Esch's father is growing concerned. He's a hard drinker, largely absent, and it isn't often he worries about the family. Esch and her three brothers are stocking up on food, but there isn't much to save. Lately, Esch can't keep down what food she gets; at fifteen, she has just realized that she's pregnant. Her brother Skeetah is sneaking scraps for his prized pit bull's new litter, dying one by one. Meanwhile, ... Read More

A hurricane is building over the Gulf of Mexico, threatening the coastal town of Bois Sauvage, Mississippi, and Esch's father is growing concerned. He's a hard drinker, largely absent, and it isn't often he worries about the family. Esch and her three brothers are stocking up on food, but there isn't much to save. Lately, Esch can't keep down what food she gets; at fifteen, she has just realized that she's pregnant. Her brother Skeetah is sneaking scraps for his prized pit bull's new litter, dying one by one. Meanwhile, brothers Randall and Junior try to stake their claim in a family long on child's play and short on parenting. As the twelve days that make up the novel's framework yield to a dramatic conclusion, this unforgettable family - motherless children sacrificing for one another as they can, protecting and nurturing where love is scarce - pulls itself up to face another day. Read Less

All Editions of Salvage the Bones

The Fire This Time: A New Generation Speaks about Race

Men We Reaped: A Memoir

Where the Line Bleeds

The Buddha in the Attic

Set in a town called Bois Sauvage, Missippi Jesmyn Ward's National Book Award winning novel "Salvage the Bones" (2011), tells the story of a poor African American family in August, 2005, in the days surrounding Hurricane Katrina. The novel describes in detail African American life in a small Mississippi town early in the 21st Century and the harsh existence of a motherless family struggling to get by.

A young girl, Esch Batiste, 15, narrates the story. Esch lives with her father, and three brothers, Randall, 17, Skeetah, 16, and Junior 7. The mother of the family died giving birth to Junior, and Esch has assumed de facto mothering duties for the boy. The mother's death also casts a pall on the family and the story. The father, Claude, has largely withdrawn into drink following the death of his wife. Randall dreams of earning a scholarship and playing college basketball. Skeetah is deeply attached to his pet pit bull, China. And Skeetah, an intelligent, quiet impressionistic adolescent girl, is absorbed by her high school study of Greek mythology, particularly the stories of Medea, Jason, and the Argonauts.

The story begins 10 days before Hurricane Katrina devastates Bois Sauvage, reaches its climax during the day of Katrina, and ends in the day following the destruction. During this short time, Ward describes places, events, and people slowly and in detail. Ward creates palpable tension in the days leading up to Katrina and skillfully integrates the turbulent events in the lives of the Batistes with the large world of the storm.

The family has been dispirited and separated since the mother's death, as each of its members work to overcome their isolation and come together again. The stories of the siblings and their father are interrelated throughout the book. Young Esch has been having sexual relations since the age of 12. At the beginning of the novel, she finds herself pregnant by a family friend, Manny, who is living with another young woman. At many points in the story, Esch compares her own apparently abandoned situation, with the jealousy and passion of Medea in the Greek myth. At one point, feeling abandoned and alone, she refers to her unborn baby as a "black Athena", a reference to the Greek myth of the goddess who sprung full-grown from the head of Zeus. Esch tells her story in light of two other pregancies in addition to the passions of the Greek myth: the pregnancy of her mother with resulted in death, and the pregnancy of Skeetah's dog.

The strongest emotional relationship in the book is between Skeetah and his dog, China, who has just given birth. Skeetah's entire emotional life centers around the dog, and he cares for her responsibly and totally. However, much of the story involves dog fighting which the young boys of the town engage in illegally in the woods. For all her docility with Skeetah, China is ferocious in the sordid dog fighting ring. In addition to the description of Katrina, Ward reaches a strong climax to her novel in her depiction of the barbarities of dog fighting.

Skeetah hopes to sell China's pups to earn money for Randall to pursue his basketball. During the days leading up to Katrina, Randall's high school team is scheduled to play a game that will determine the team member who receives a scholarship to a prestigious basketball camp. Randall's hopes for the prize become emeshed in complications resulting from his sister's pregnancy and from Skeetah and his care for his dog.

Ward describes the ferocity of Katrina with great power and immediacy. The Batiste family members, caught in their own lives, must haltingly try to come together as a family to survive. Following the storm, the family and the community of Bois Sauvage must "salvage the bones" as they attempt to build a new life.

Ward has written a lyrical, dense novel with a dark theme and with the light of hope. It is a worthy book to read and to be honored with the National Book Award. Readers with a passion for the literature of the American South will love this novel.

But uplifting as well. I haven't cried during a read in 40 years, but this one choked me up. Excellent writing!

One of the best books I've read recently this story takes place before, during and after Hurricane Katrina.

It opens with the birth of China the pitbull's puppies and, through the eyes of Esch, the 12-year-old daughter of the family, it spins a story of love in poverty, trust and hardship.

Esch's family consists of all men. Her brother Skeetah, who owns, tends and nearly worships China, Randall, the oldest, a budding basketball star who takes care of the family when the father is too drunk to do so, and Junior is the smallest of the boys, by turns confused and hurt by life. China herself,is a main character and the money her puppies could bring would fulfill a dream for at least one family member.

The lead-up to the hurricane is desultory, she is a vague threat that no one seems to take too seriously. When she hits, she is terrifying and we're swept along in the fear and horror of her rage. Afterward, we wander the coast with her characters, awed and confused by the scale of the destruction. "There is a house sitting in the middle of the road, facing us, like it guards the secrets we will find farther in."

The prose is fluid and lovely even poetic at times. Read this book- a remarkable, well-written and touching story.